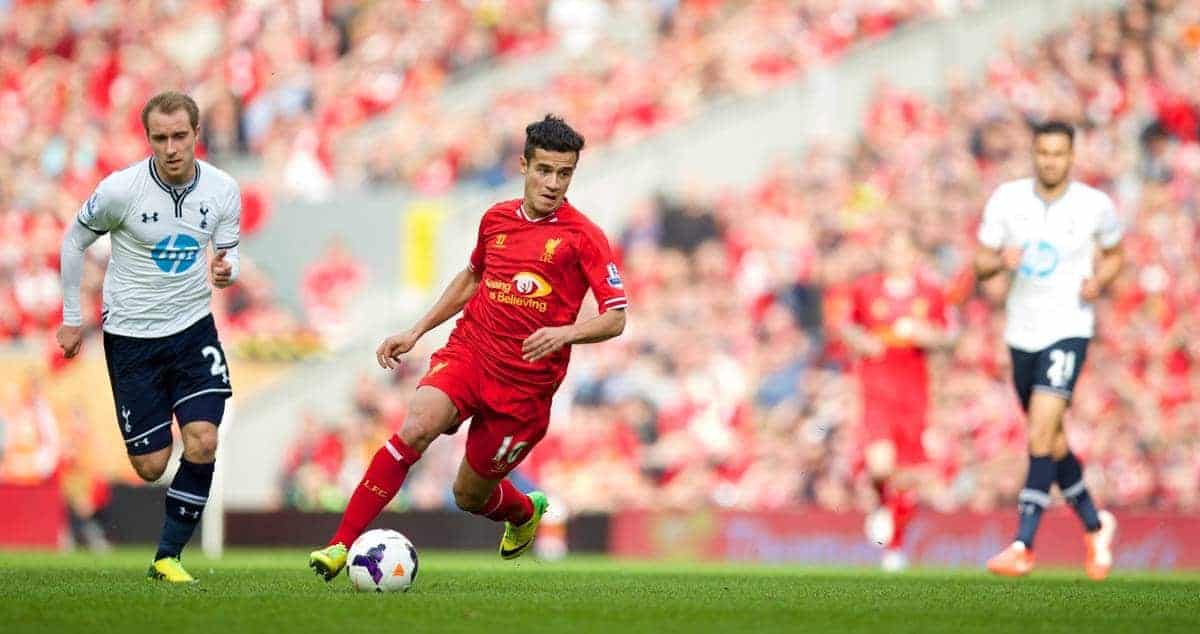 Brendan Rodgers’ Liverpool head to the White Hart Lane on Sunday where they’ll be looking to return to winning ways against Tottenham in their third game of the season. The Reds will be looking to bounce back from Monday night’s disappointing second-half performance and defeat at the Etihad Stadium, when they take on Mauricio Pochettino’s rejuvenated side in what will prove to be a tough fixture.

BR: If you look at our stats since I’ve been here, we’ve been good at bouncing back from bad results.

One thing Liverpool have been able to do under Rodgers is respond well to defeats and the Reds will be looking to continue that impressive trait in London.

However, they will have to become the first team this campaign to breach a Spurs defence, who have yet to concede a goal in the Premier League.

Last December’s unforgettable match saw Liverpool produce their best performance and result of the season with an outstanding 5-0 win.

Luis Suarez handed Rodgers’ side the lead with a composed finish, and Jordan Henderson doubled the advantage with a well taken volley before half time.

The second-half produced some magnificent scenes as Jon Flanagan netted his first goal for the club with an excellently executed half-volley in front of the travelling Kop, before goals from Suarez – who captained the team that day – and Raheem Sterling capped off an electric display from the Reds.

Rodgers has hinted that new signing Mario Balotelli could be handed his first outing in a Liverpool shirt, and the Italian will be hoping to make an immediate impact with the team after watching Liverpool slump to defeat against his former club earlier in the week.

BR: Mario’s fine, he’s settled in very well and looked fantastic in training. Focus very much on his football. He’s a good lad.

More positive news comes with the Liverpool boss confirming that Adam Lallana is fit again, and will be in the squad for Sunday’s game despite being short of match fitness.

BR: Adam Lallana is in this weekend’s squad, he’s looked good in training but is short of match fitness.

However, three of the Reds’ back four from Monday night – Glen Johnson, Alberto Moreno and Martin Skrtel – are doubts for the clash after picking up injuries against City and their conditions will be monitored ahead of the game.

Rodgers: "Moreno twisted his ankle and has been recovering well. Sun could be difficult for Johnson, as for Skrtel we'll see over next 48hrs

Javier Manquillo could therefore receive a recall to the starting XI at right-back and Mamadou Sakho could make a welcome return to start alongside Dejan Lovren if Skrtel fails to shake off the knock he picked up at the Eithad.

Rodgers’ also confirmed that Jose Enrique is back in training too, and the Spanish left-back could also make a return to action, depending on Moreno’s fitness.

Despite the injuries in defence, Daniel Agger is again unlikely to be involved as the situation over the Danish internaitonal’s future rumbles on, and Fabio Borini too is likely to be left out of the squad as Sunderland continue to attempt to lure him to the Stadium of Light. Balotelli’s arrival all but ends the his fellow Italian’s chances of future involvement.

BR: There’s some players who know they’ll have very limited game time if they choose to stay past Monday’s transfer deadline.

Lively wide-man Lazar Markovic will be pushing for a starting berth on Sunday afternoon too after an impressive cameo display in the flat second-half at the Etihad.

The midfield three however is likely to remain unchanged, although a change of shape to bring Philippe Coutinho infield from his ineffective wide position could be adopted by the Liverpool boss.

Stability has been in short supply at White Hart Lane in recent times, as two managers lost their jobs in the space of last season.

Pochettino, who impressed so greatly at Southamptom, was the Spurs boards’ chosen man to replace Tim Sherwood, and the former Argentina centre back has already begun to turn the tide in north London.

After a summer of big spending last summer under Andre Villas-Boas, Pochettino hasn’t quite enjoyed the same luxury. However, four new signings have been brought into the club, including former Liverpool transfer target Ben Davies, Michel Vorm, USA World Cup right back, DeAndre Yedlin, who has been loaned back to Seattle Sounders, and Eric Dier, who’s scored two goals in two games since arriving from Sporting Lisbon for £4 million.

BR: Pochettino is a real nice guy who loves his football. He’ll look to go to Tottenham and make an impact. They’ve started well.

Two wins from their opening two fixtures, both in London derbies against West Ham and QPR have left Spurs sitting pretty at the top of the Premier League, as the imprint and philosophy that saw the Argentine win so many admirers on the South coast begins to transfer to his players at his new club.

Spurs continued their strong start on Thursday night with a comfortable 3-0 win against AEL Limassol in their Europa League qualifier second leg.

With Sunday’s match being their second in four days, Pochettino is likely to freshen up his team with Erik Lamela, Christian Eriksen, Emmanuel Adebayor and Nacer Chadli among others all likely to be recalled to the squad.

Sunday’s early afternoon match will be shown live on Sky Sports 1, with kick off from White Hart Lane at 1:30pm.