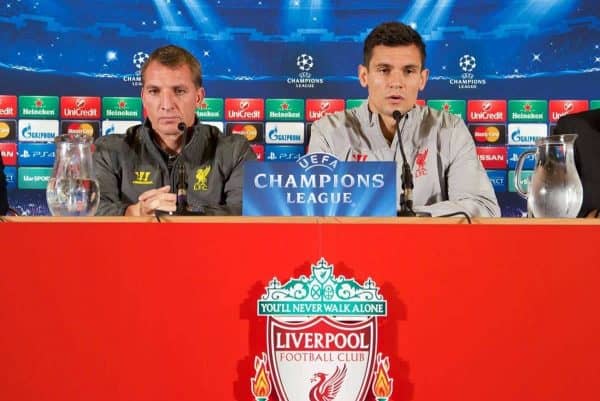 On being back in the Champions League

“We’re very excited to be in the Champions League. Five years is a long time to be out of it for a club like Liverpool.

“Our overriding objective first of all is to qualify and come out of the group. We’ll take it one game at a time and aim for three points.

“Ludogorets will be a tough game for us, like al games at this level. They play an open, attacking style of football.

“They’re a team that attack and want to do well. They’re a top team. But it’s more about ourselves.”

“We need to up the tempo of our game, press more and that will ignite the crowd at Anfield, who have been brilliant since I got here.

“We need to be better defensively. We were disappointed at the weekend. When you dominate but don’t score, you at least want a point.

“We need to give some time for the new players to play cohesively. Our emphasis will always be positive, but we need to tighten up.”

On how Mario Balotelli was treated by Aston Villa‘s defenders

“There’s no complaints from me about Mario Balotelli’s treatment against Aston Villa. We ask players to work hard, but be fair.”

On team news for Tuesday night

“Martin Skrtel joined the group yesterday, he’s working hard but won’t be back from injury yet. He should be back for West Ham.”

“The club has been away from the Champions League for too long. My main priority was to get the club back to this level.

“Liverpool are one of the footballing greats of world football and the Champions League is the elite competition.

“A few supporters have been in my office this last week and they’re really looking forward to traveling Europe again and the big games. That’s why we do all this — for the supporters.

“The key for us is building a top four sustainable club. Everyone wants to work at the elite level, and the Champions League is that.”

On the squad’s experience and youth

“Steven Gerrard has a great record in this competition, and the young players are going to gain valuable experience playing in it.

“We’ve got no fear of the competition. We’ll impose our style, our way of working and playing. We’ve done that and continue to do so.

“Balotelli is working very hard, he was unfortunate to be ill last week. It was only matchday he declared himself fit to play.

“Balotelli is arguably one of the most experienced players we have at the highest level. He’s relishing the responsibility and works hard.”

“Ludogorets’ emphasis is on attacking football. But I only worry about ourselves. We’re used to starting games quickly.

“But it’s important that if we don’t get an early goal, we know how to avoid conceding, go forward, invent and penetrate.

“Ludogorets have done very well to qualify for the group stages and they’ll be excited about coming to the iconic stadium of Anfield.

“Ludogorets signed a goalkeeper last night, we’ve got our guys working on who could play against us. We’re prepared.”

“It’s an honour to lead such a great club in the Champions League.”