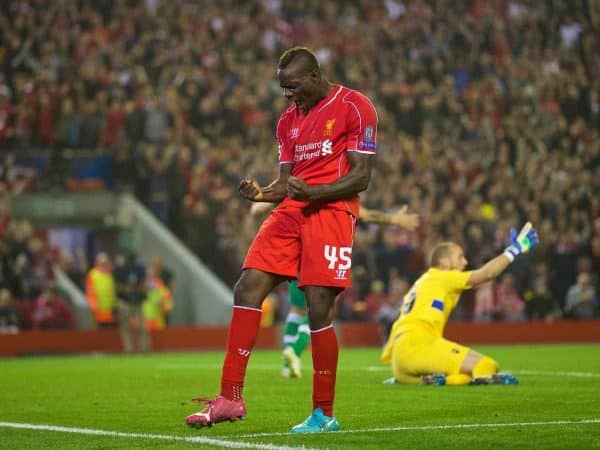 Liverpool earned a crucial three points in their Champions League opener against Ludogorets, as Steven Gerrard’s stoppage time penalty gave them a dramatic 2-1 win. Henry Jackson looks at how each Reds player performed on the night.

The 26-year-old was largely untroubled, but he was in no man’s land for Ludogorets’ equaliser. The Belgian needs to improve his decision-making in general.

The young Spaniard had another solid evening, and was again better defensively than going forward. The 20-year-old could improve the consistency of his crossing, but he is offering a safer pair of hands than Glen Johnson.

There was again a shakiness about Lovren’s performance, and he was fortunate not to concede a penalty in the first-half. The 25-year-old has had a nervy start to his Liverpool career.

The Frenchman was the better of the two Liverpool centre-backs on the night, using the ball well and reading the game impressively on the whole.

Moreno offered plenty of lung-busting runs forward from start to finish, and although his crossing was inconsistent, he was always a threat. The 22-year-old also made a terrific challenge late on to deny the visitors.

The skipper enjoyed a very fine evening, capping it with a nerveless match-winning penalty with almost the final kick of the game. The defensive side of his game was good in general, and he used the ball as well as anyone. The 34-year-old did tire late on though.

The Brazilian has had a poor start to the season, and he was out of sorts again on his Champions League debut for the Reds. He lost the ball on countless occasions, and struggled to stamp his authority on proceedings at any point.

The 26-year-old is still clearly a long way from being 100 per cent fit, and he struggled. There is clearly plenty of talent there, but he was always on the periphery of things.

The 19-year-old was quiet in the first-half, but after the break he was one of Liverpool’s best players. He always looked a threat out on the left, and he was also impressed in his preferred role at the tip of the midfield diamond. Lost the ball for the equaliser.

Balotelli often flattered to deceive, but he ended up playing a key role in the match. He produced some nice flicks and good link-up play, and he took his goal excellently. The 24-year-old will improve once he gets more playing time under his belt.

Solid but unspectacular, Lucas was ponderous on the ball a few times but offered good defensive cover in midfield.

Had a header saved almost immediately after coming on, but was otherwise quiet.