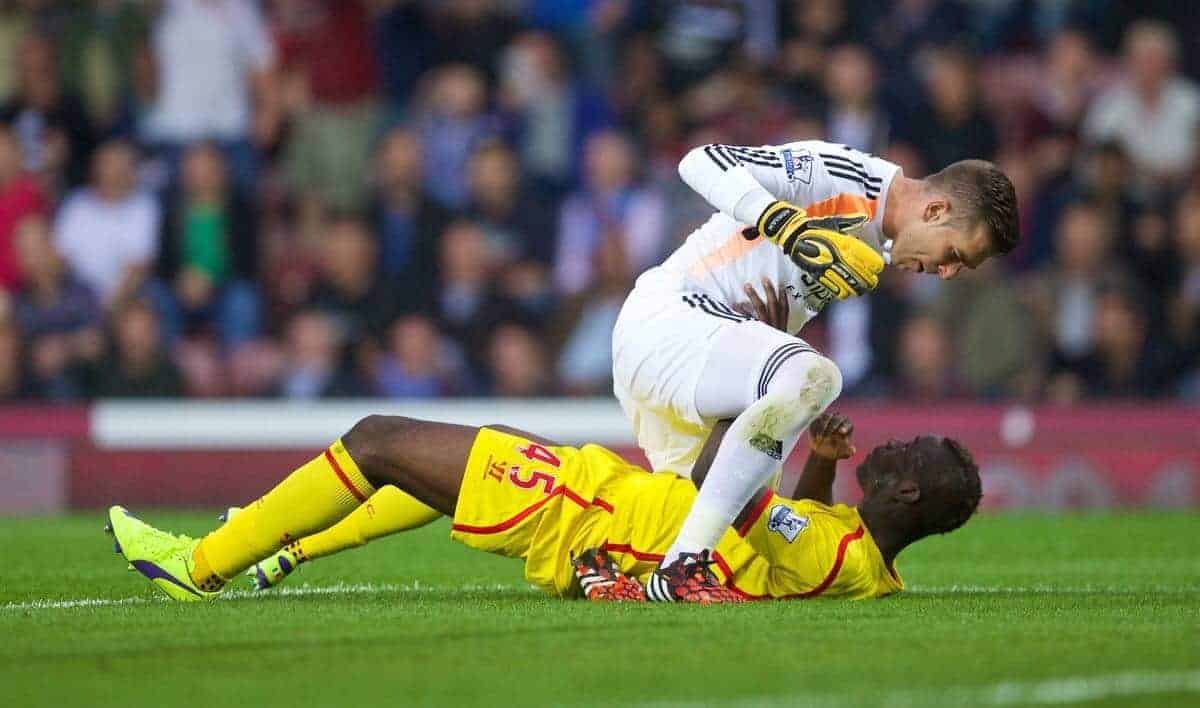 Another weekend, another disappointing defeat for Brendan Rodgers’ Liverpool. Here, we round up the thoughts of journalists following the Reds loss away to West Ham.

Don’t hold back, this was a performance worthy of significant criticism, as evidenced by Sunday’s papers.

After having lost to Aston Villa at Anfield the previous weekend, Brendan Rodgers’ Liverpool side needed a big performance away at West Ham United’s Boleyn Ground on Saturday night to reassert their momentum.

However, goals from Winston Reid, Diafra Sakho and Morgan Amalfitano consigned the Reds to defeat in another disappointing Premier League encounter.

Defensive issues on Liverpool’s end were matched by a boundless energy and remarkable hunger, particularly from former Red Stewart Downing, as Sam Allardyce’s London side cruised to victory.

Unsurprisingly, the majority of the criticism levelled at Rodgers’ side was aimed at myriad defensive issues—particularly, centre-backs Dejan Lovren, Mamadou Sakho and Martin Skrtel struggled.

Forget the length of the grass, the heat of the dressing room or the parking of the away team coach. Liverpool FC have only themselves to blame after their start to the season slipped from indifferent to dismal with shocking defeat at West Ham United…Liverpool have kept just one clean sheet in their last 12 games, the money spent on addressing last season’s shortcoming having arguably made the situation even worse.

Terrible, horrible, shambolic, pathetic, embarrassing, rubbish. There were a lot of words floating around the internet to describe Liverpool’s defending during the the game at Upton Park – and these were just the ones that can be repeated…In truth, nobody led, nobody stepped up and won the ball, nobody won headers and nobody won tackles. You could point the finger at any of Liverpool’s back line whether it be Lovren, Martin Skrtel, Mamadou Sakho, Alberto Moreno or Javier Manquillo.

Having signed nine players this summer, and with the side currently underperforming, accusations of the side having ‘done a Spurs’ are inevitable, with Dom Fifield of The Guardian writing:

In truth, if this revamped squad are still becoming accustomed to each other’s foibles then the actual team’s constant shape-shifting even within games can leave them looking dizzied at times. A troubling injury list, the raised expectations from last term, a more onerous schedule incorporating Champions League football and the disruption caused by Luis Suárez’s departure are all mitigating circumstances of sorts, but here they were eclipsed by West Ham’s energy.

At the moment, with Rodgers seemingly facing difficulty in finding his best XI, there are shades of Spurs under Andre Villas-Boas last season but—and this is a huge but—the Reds boss and his immense quality demand patience from a fraught fan-base.

Writing for the Sunday People, Dave Kidd focussed on the problems Rodgers is facing with a busy fixture list:

It may be too early to panic just yet – but Liverpool’s post-Suarez era is suffering a seriously stuttering start. As the Reds returned to domestic action after their first Champions League match in five years, Brendan Rodgers found the juggling routine too tricky to handle in the East End last night.

Arash Hekmet, also of the Mirror, chose to stress the promise shown by Raheem Sterling and Adam Lallana despite defeat:

In the absence of Sturridge’s deadly finishing, the weight of Liverpool’s attack has fallen on their best player so far this season, Raheem Sterling. Again, he looked a cut above and it was no surprise that the 19-year-old popped up with Liverpool’s goal after some fine control by Balotelli in the box. But the 19-year-old needs more help from his team-mates, who have now slumped to back-to-back defeats in the league and only just beat minnows Ludogorets on their Champions League return.

It was Adam Lallana who did just that following his introduction, and the £26million man gave West Ham‘s defence plenty to think about in the second half.

These fragments of optimism are what Reds fans must cling to in the wake of this dismal performance—Liverpool welcome Middlesborough to Anfield on Tuesday night for a Capital One Cup tie, and this is perhaps the perfect opportunity to bounce back.

What can be taken from this defeat, and how can Brendan Rodgers bounce back? Let us know your thoughts in the comments below.