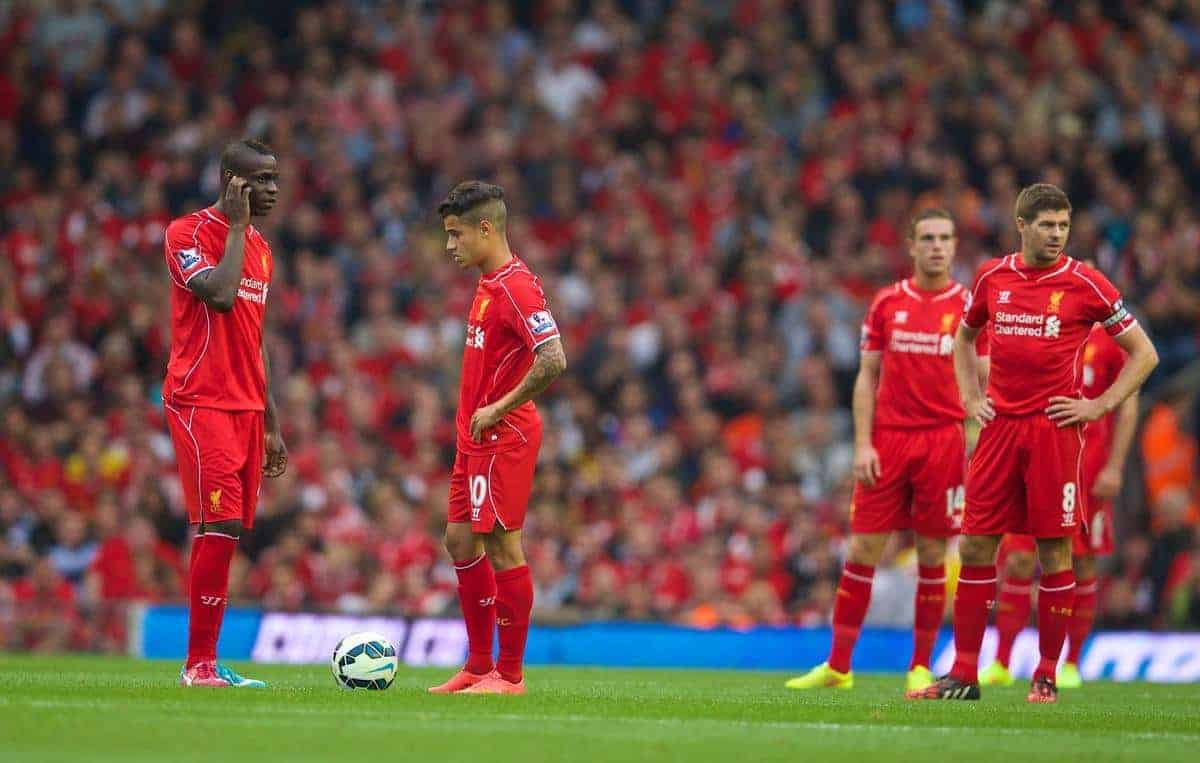 Maurice Stewart talks superstitions and the small margins that make a big difference in football having watched Liverpool’s 1-0 defeat to Aston Villa at Anfield on Sunday.

Football fans are stupid. Willingly at times. We know that none of our superstitions bear any influence whatsoever on the outcome of a game, and yet if we break them, that darkness of thought creeps in.

I invited my friend Ash along to the match with me today. One of only a handful of Liverpool-supporting friends that I haven’t been to Anfield with.

There is a reason for this – when we watch Liverpool together, they lose. Four previous games over eight years of varying magnitude – from a League Cup game to a Champions League Final, in four different locations — four defeats.

My girlfriend takes great pleasure in telling me how ridiculous I sound whenever I bring up one of my superstitions. She seems to think I don’t know it’s ridiculous.

In the grand scheme of things, where and with whom I watch the match has absolutely no connection to the outcome. But time and again, professional, multi-billion pound sports are reduced to the smallest of margins. Thousandths of a second. A millimetre turn of a steering wheel. The width of a post. That reality keeps those superstitions alive.

Ash and I are determined to banish the dark thoughts. We arrive on the Kop, still soaked in optimism. You’ll Never Walk Alone is glorious from here.

The Villa fans try to drown us out, but not for long. They want to hear it, experience it, just like every other fan who comes here. 40,000 people doing the Haka. Defiance washes over us like the banners of the Kop.

Fast start, early goal, 3-1. Nailed on. Why were we so scared? We are Liverpool.

It took roughly 10 minutes to remember why. Villa are trying to get Gabriel Agbonlahor running at Mamadou Sakho as much as possible. None of us are surprised. Ash notices Sakho’s problem is that he starts every match as a new born elephant. Once he’s learnt how to walk and run, he’s fine.

Today it takes the big Frenchman about 20 minutes to get the hang of it. Sadly by then it’s too late.

A very familiar failing at a set piece, and we’re a goal down. Without the benefit of TV replays it’s hard to apportion blame, but one thing I can be certain of is that if Simon Mignolet commanded his area in the manner expected of a keeper at a top club, that goal doesn’t happen.

I glance at the clock. A long way to go yet. The comfort blanket of never seeing my team lose in the flesh over 12 years is a warm one. This team will score.

The Villa fans sing “we’re gonna win the league”. The Kop laughs and applauds. 20 minutes later it doesn’t seem quite as funny.

My blanket doesn’t stretch as far as the pitch. As stupid as superstitions are, footballers have plenty of them. They are far from immune to dark thoughts either. It doesn’t take much to trigger them.

The sight of a team with good recent memories of this fixture, on the back of a great start. A debilitating international break that robbed us of our star striker. Our first game without both him and his old sparring partner since December 2012. Four players dropped into the cauldron of Anfield for the first time. These are all small margins, but any one of them can open a trapdoor.

The trouble with small margins is that they can increase quickly, especially when strung together. Suddenly our centre halves are the ones with time and space on the ball, not our creative midfielders.

Patient Arsenal-esque passing isn’t dragging the Villa defenders out of position. Movement comes to a standstill. Villa have come with a gameplan, and phase one is complete — grab an early goal.

Phase two is to fill their defensive third with white shirts and wait for us to do either something sublime to score, or something ridiculous to give them a chance to counter.

Our two most regular producers of the sublime are on the bench – one in his kit and one in a suit. It’s a pragmatic yet bold decision from Brendan to leave Raheem on the bench at the start of such a heavy run of games. A chance to show the rest of the league how far our team has evolved. We can hurt you from all sides now.

However, there’s no doubt seeing our team sheet gave Villa a lift — another small margin. Rodgers is within his right to expect this XI to get it done, but despite a long pre-season, those at the top of the pitch are taking longer to get used to each than those at the other end.

Philippe Coutinho‘s return to international football hasn’t given him the boost we’d hoped for. It certainly hasn’t improved his finishing. Lazar Markovic – our best attacker in the first half – is making good runs without being seen.

The two that didn’t play for their countries during the recentt international break, Adam Lallana and Mario Balotelli, look the most lethargic.

The sharp triangles of White Hart Lane have been replaced by straight lines, worn deep through repetition like a Johnathon Trott pitch mark.

An early second half increase in tempo brings renewed optimism. A blast from Rodgers blowing the dark thoughts away. But a flurry of half chances never develops into irresistible pressure.

The Kop can’t quite suck the ball in. A blatant free kick not given. Two deflections drop agonisingly out of reach, one off of Balotelli’s face. Small margins.

Mario isn’t quite on it today. The malaise has caught him (as did that clogger Philippe Senderos a fair few times), and the conviction isn’t quite there.

Lallana looks worryingly unfit. Those unflattering substitution stats from his time at Southampton become impossible to ignore while watching him.

Two fellas bark so long and hard for Raheem they get a round of applause when he finally comes on. They get a massive laugh when his first poor touch of the game leads one of them to shout “He’s shit, him”.

For a second the darkness dissipates again. We know he’s not shit. The Villa players know it too. Suddenly, they look unsure of themselves, doubling, tripling, even quadrupling up against him. Moreno begins to find space down his flank. We’re not that far away from a goal. A small margin.

The last 20 minutes manages to dig up bad memories of the past and expose fears for the future. This will be the blueprint followed by most of the other 17 teams that will visit Anfield this season.

20 players between the D and the penalty spot. Today the ball doesn’t reach the keeper’s hands let alone the goal. The late switch to 2 strikers merely allows Baker and Senderos to switch to autopilot and head balls clear.

Even the relief that Aly Cissokho doesn’t get booed turns to resentment when trying to count the number of times he played this well for Liverpool.

Villa didn’t play that well. This wasn’t the young swashbucklers who cut us apart two seasons ago; charming the nation’s press into proclaiming them the new Fergie’s Fledglings, only to ship eight at Stamford Bridge a week later.

This wasn’t the team who shot out of the blocks in January before running out of steam. Benteke was nowhere to be seen. Both teams had spells of dominance, ours longer than theirs. Small margins.

Of course, all of that makes it feel worse. We have had an up and down start, but this was the first time we had got a worse result than the corresponding game last season. 84 points is harder already. In these times it’s important to remember the positives of small margins.

Only one of our top four rivals has won this weekend (so far). Today’s defeat betrayed a lack of cohesion rather than a lack of talent. Hours on the training pitch can sort that out. This squad is well equipped to find the formula for success. Even in defeat, it looks more a case of when rather than if.

Ash was one of many voices muttering about the wrong team selection as we trudged down Sheil Road, but I don’t blame the manager for this defeat. It was a big show of confidence in the squad, just when outsiders are anointing Sterling as the new man in our “one-man-team”.

Unfortunately they weren’t ready to repay that faith. Not yet. Maybe a few weeks too soon. Small margins.

Big smashing defeats are awful, but it’s the small margins that send us to the madhouse. Small margins are a breeding ground for indecision, doubts, arguments amongst fans, players and even coaches.

The hope is that they are small enough to be recovered before the end of the season. The fear is that these are the small margins that will turn 24 years into 25.