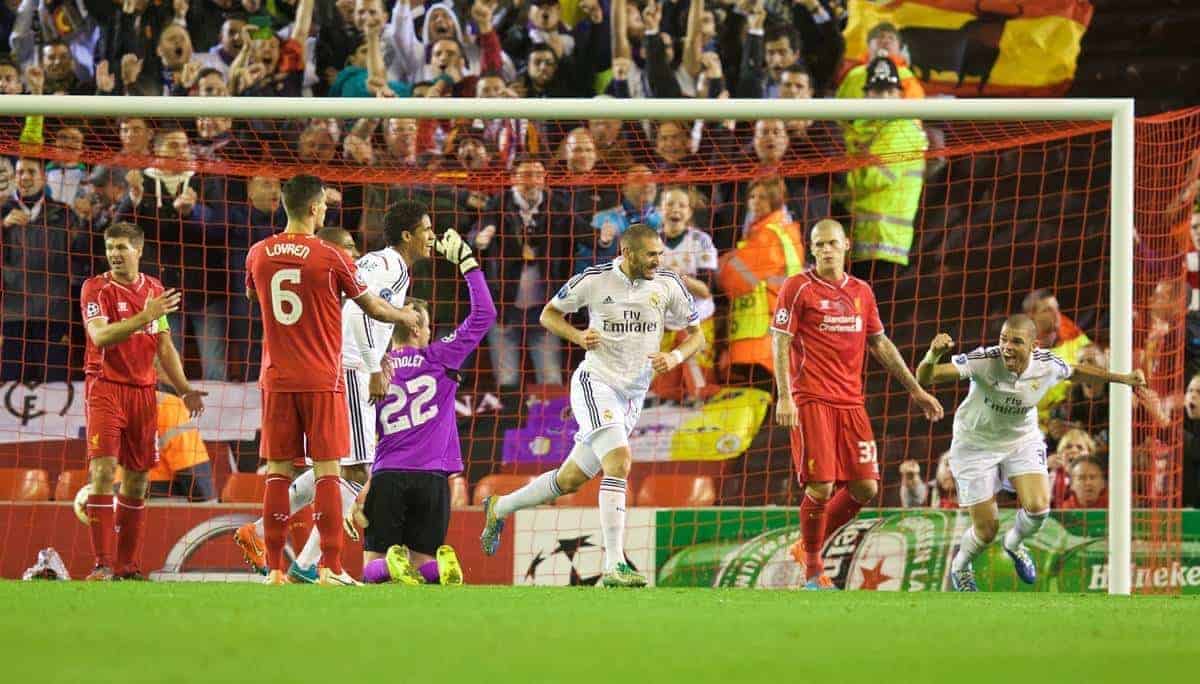 Liverpool succumbed to a demoralising defeat to Real Madrid at Anfield on Wednesday, as Karim Benzema’s double and a terrific Cristiano Ronaldo strike gave them a deserved win over Brendan Rodgers’ side. These were the nights we dreamed about during the summer, as Real Madrid visited Anfield for a mouth-watering Champions League clash. As it turned out, and as many had predicted prior to the game, it ended up being something of a nightmare.

Brendan Rodgers made three changes to the side that narrowly beat QPR on Sunday, with Alberto Moreno replacing the disappointing Jose Enrique at left-back and Joe Allen coming in for Emre Can in midfield. Philippe Coutinho‘s impressive cameo against the Rs saw him preferred to Adam Lallana.

There was a frantic feel to the opening exchanges, as both sides took a little time to settle in front of a typically atmospheric Anfield. The Reds looked threatening though, with Raheem Sterling clearly unsettling the European champions’ defence.

Ronaldo and Gerrard tested Simon Mignolet and Iker Casillas respectively, from long-range, but they were the only moments of genuine threat on goal in the first 20 minutes. The Reds’ relentless early pressing died, however, and the visitors began to take control.

After 22 minutes Carlo Ancelotti’s side took the lead, and it was a wonderful goal. Ronaldo played a brilliant one-two with James Rodriguez, and the 2014 Ballon d’Or winner poked a terrific effort past Mignolet. It was a dagger through the hearts of Rodgers’ side.

It was 2-0 minutes later, as Karim Benzema’s header looped into the far corner of the Anfield Road net. It was set to be an extremely long evening.

It was 3-0 shortly before half-time, and the game was well and truly put to bed. Benzema tapped home following a scrappy spell of play from a corner. It was yet more poor defending from a set-piece, with numerous players not doing their job.

Allen fired an effort wide at the other end, and Coutinho thundered a wonderful effort against the post, but at the Liverpool trailed 3-0. An Istanbul-esque comeback was needed. Balotelli was replaced by Adam Lallana at the break, and there were some who wondered whether the Italian’s decision to swap shirts with Pepe at the break may have angered Rodgers into substituting him.

It was a decent start to the second-half by Liverpool, and Lallana’s link-up play with Sterling and Coutinho was immediately impressive. There was an understandable flatness about the game, however.

Ronaldo forced Mignolet into a save on the hour mark, as the visitors continued to look horribly threatening on the counter-attack.

Midway through the second-half Sterling’s effort was tipped over by Casillas, and the Reds’ general play was much-improved. A terrific burst through the midfield by substitute Emre Can brought a rare cheer from the hushed home faithful.

As the final 10 minutes approached, it was simply a case of whether Liverpool could get a consolation goal to give the scoreline a slightly better look. It didn’t come though, and there were no further goals in the contest.

The final whistle blew, bringing an end to what had been an eye-opening evening for Rodgers and his side. Their hopes of qualifying for the Champions League knockout stages are now looking dicey to say the least.

Rodgers opted for the 4-4-2 diamond formation that has often been very effective over the past 12 months or so. Gerrard started in the deep-lying playmaker role, Coutinho played at the tip of the diamond and Sterling started up front alongside Balotelli.

Having pressed very effectively early on, in which the likes of Pepe and Raphael Varane looked a little rattled, Liverpool’s intensity fell away, and Madrid ran the show. The Reds’ formation became more of a 4-5-1, giving the visitors’ midfield three all the time and space to run the show.

It was hard to watch at times, but this young team will learn hugely from such a tough evening.