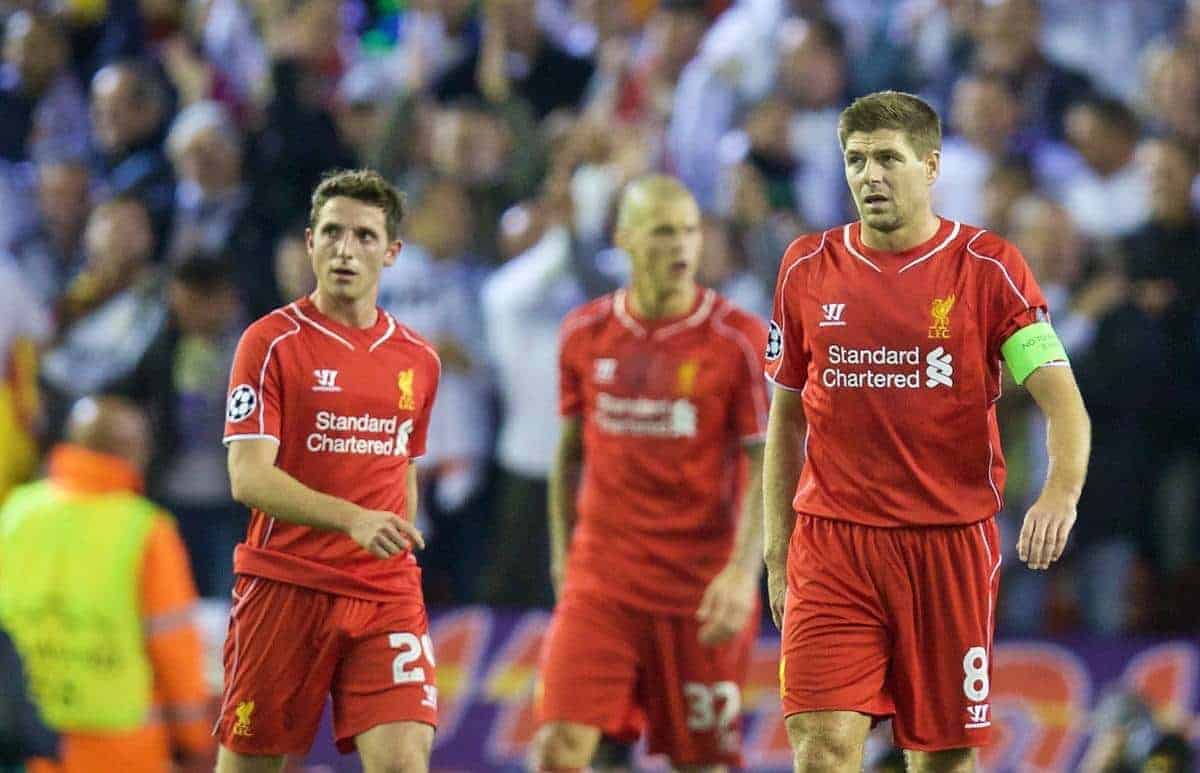 Liverpool lost 3-0 to an exceptional Real Madrid side in their Champions League clash at Anfield on Wednesday evening. We round up the reaction of journalists, fans an ex-players on twitter.

Liverpool were outclassed by a terrific Real Madrid side at Anfield, as Brendan Rodgers’ succumbed to a deserved 3-0 loss against the European Champions. Two goals from Karim Benzema, both avoidable, and a terrific strike by Cristiano Ronaldo were the difference on the night, but in truth it could have been more had Los Blancos not eased off in the second-half.

It was an evening that showed just how good the top teams in Europe are, and illustrated how far Rogders’ side still are from being the finished article. Once against soft goals were conceded, and it is becoming a serious cause for concern.

In the other Group B clash, Ludogorets secured a last-minute win against Basel, which is an excellent result for the Reds in their quest to qualify for the knockout stages. Madrid are top on nine points, while the other three all have three points. It is all to play for.

That's embarrassing. Another set-piece goal. #LFC have to climb Everest.

Jim Boardman of The Anfield Wrap, echoing Pearce’s sentiment about the defending:

We didn't look as vulnerable in 2005 – with Djimi Traore at the back.

Ben Smith of the BBC, on Mario Balotelli’s decision to swap shirts with Pepe at half-time, and the potential headlines that may come his way:

Mario Balotelli swapped his shirt with Pepe as the players went down the tunnel for half-time. Doesn't reappear. pic.twitter.com/o8J6GqwdN9

Right or wrong, that decision is bound to have a impact of Mario Balotelli's physiological state. Guarantees headlines, anyway.

The Daily Telegraph’s Henry Winter was also fairly scathing of the Italian:

Balotelli anonymous in first half, then swaps shirts with Pepe at the break, now subbed. Good player at times but too often an embarrassment

Others were more bothered about Balotelli’s performance than his shirt swapping antics:

Personally I'm not arsed about a player swapping shirts at HT, no issue for me. More concerned about what happens on the pitch.

Dominic King of the Daily Mail on the brilliance of Real Madrid’s opener:

Absolutely no disputing that was a magical goal. You'll go a long way to see better link up play than between James Rodriguez & @Cristiano

Liverpool's back four of Johnson, Lovren, Skrtel and Moreno have won 0% of their tackles in the second half. Oh dear.

Absolutely tortured in that first half…

Unless problems at the back get sorted quickly, it will be a very tough season. Too many avoidable goals conceeded.

So anyway, Ludogorets beat Basel…group still alive. 2nd place up for grabs. The less said about #LFC tonight though the better.

Ouch. I'm working the game and I can't help saying its a master class from madrid. Bring on @DietmarHamann please

I thought Brendan Rodgers picked the right team here tonight but not much you can do against a team this good.

Ronaldo finally proves he can score on a chilly Wednesday night in Liverpool….and how.