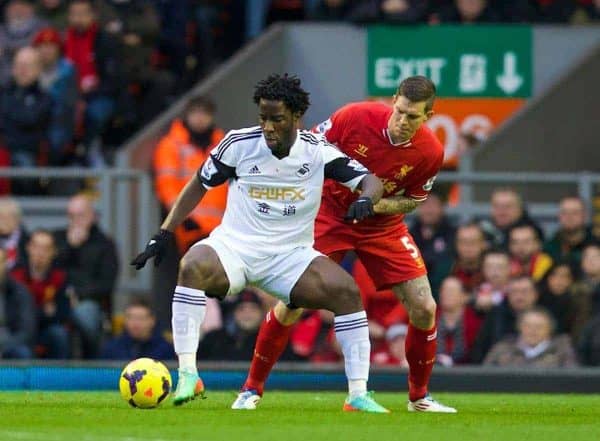 How Liverpool Should Line Up Against Swansea in Cup Clash

Brendan Rodgers’ Liverpool return to League Cup action at Anfield on Tuesday night when they host Swansea City in a fourth round tie. With games coming thick and fast for the Reds currently, Ben Twelves discusses the possible team selection options for the Liverpool boss ahead of the clash.

Liverpool play their fourth round Capital One Cup tie on Tuesday night against Swansea at Anfield, in a game that the Reds will be hoping turns out to be a lot less dramatic than the previous round match against Middlesbrough.

Brendan Rodgers’ side will have to improve on the goalless draw recorded on Saturday afternoon against Hull if they want to happen and ultimately progress in a slightly more comfortable manner than in September against the Championship side however.

The defensive set-up has been the focus of much attention surrounding the Reds performances so far this campaign, but a lack of creativity, unpredictability and goals in the final third is becoming increasingly alarming too, with Liverpool having scored the joint fourth lowest amount of home league goals so far – just five, level with bottom side QPR.

With goals in short supply, Tuesday’s game could see changes to the misfiring attacking options, but it’s also an opportunity for Brendan Rodgers to allow his team to search for some continuity and attempt to stumble across the right formula to make his side tick once again.

Liverpool’s lethargic displays could tempt Rodgers into making fewer changes than he did last round against Middlesbrough, allowing for some consistency and continuity between the starting players currently.

Alternatively, the Reds boss could make wholesale changes like last time round, affording rest to those that need it, and ensuring first choice players are fit and fresh for next Saturday’s tricky encounter with a rejuvenated Newcastle United.

Whichever Rodgers decides to go with, he must take the decision to rest Steven Gerrard after the captain played all three games this week.

Alberto Moreno, Martin Skrtel and Dejan Lovren too could all do with a rest having completed three full games like Gerrard, but it could be wise to stick with Mario Balotelli in attack in the hope that the  Italian finds his second goal for the club and some confidence to spark him into a bit of form.

The match also represents a good chance to give a full game to Lazar Markovic, who is yet to find form since arriving, as well as both Rickie Lambert and Fabio Borini who have barely featured this season despite the teams’ struggle for goals.

Brad Jones, Kolo Toure, Glen Johnson, Jose Enrique and Lucas Leiva are also all available should Rodgers choose to use them and young prospects, Jordan Rossiter and Williams will both be hoping for a recall to the squad for the fixture after playing their part in helping the Reds reach round four last round.

Pascoe: Always an opportunity to give youngsters a chance in the Capital One Cup.

Ahead of the match, and as outlined above, Rodgers has two options for the clash. His first is to name a fairly strong team selection for the game in an attempt to build confidence within his players, and Liverpool’s struggle on the pitch means the Northern Irishman should do exactly that, while affording rests to those who could benefit from it.

Therefore, Skrtel, Moreno, Gerrard, Joe Allen, Adam Lallana and Raheem Sterling should make way from the team that started against Hull, and Glen Johnson, Toure, Jordan Henderson, Philippe Coutinho, Lazar Markovic and Lambert should come into the side in their places.

After an improved second half display at the weekend, Liverpool should adopt the diamond formation to allow Lambert to partner Balotelli in attack; something that didn’t work out too badly and will allow the pair to hopefully find some confidence and understanding.

The midfield would see Can sitting deepest in front of the back four, with Henderson and Coutinho ahead of the German and Markovic at the tip of the diamond behind the two strikers.

Making those changes to the starting team would see the Liverpool line-up look like this:

However, if the Liverpool manager chooses to adopt the approach used in the last round and make wholesale changes to his team, the starting XI should look like this on Tuesday night:

Tuesday night will be a tough test for Liverpool against a Swansea team who will arrive at Anfield full of confidence, but it could be just the type of fixture that Brendan Rodgers and his team need to move forward.

It’s a game that has an added significance to it with the Reds struggling currently, and a positive result and performance with a strong team fielded could provide the confidence boost that the team so desperately requires to move out of the rut and upwards again.