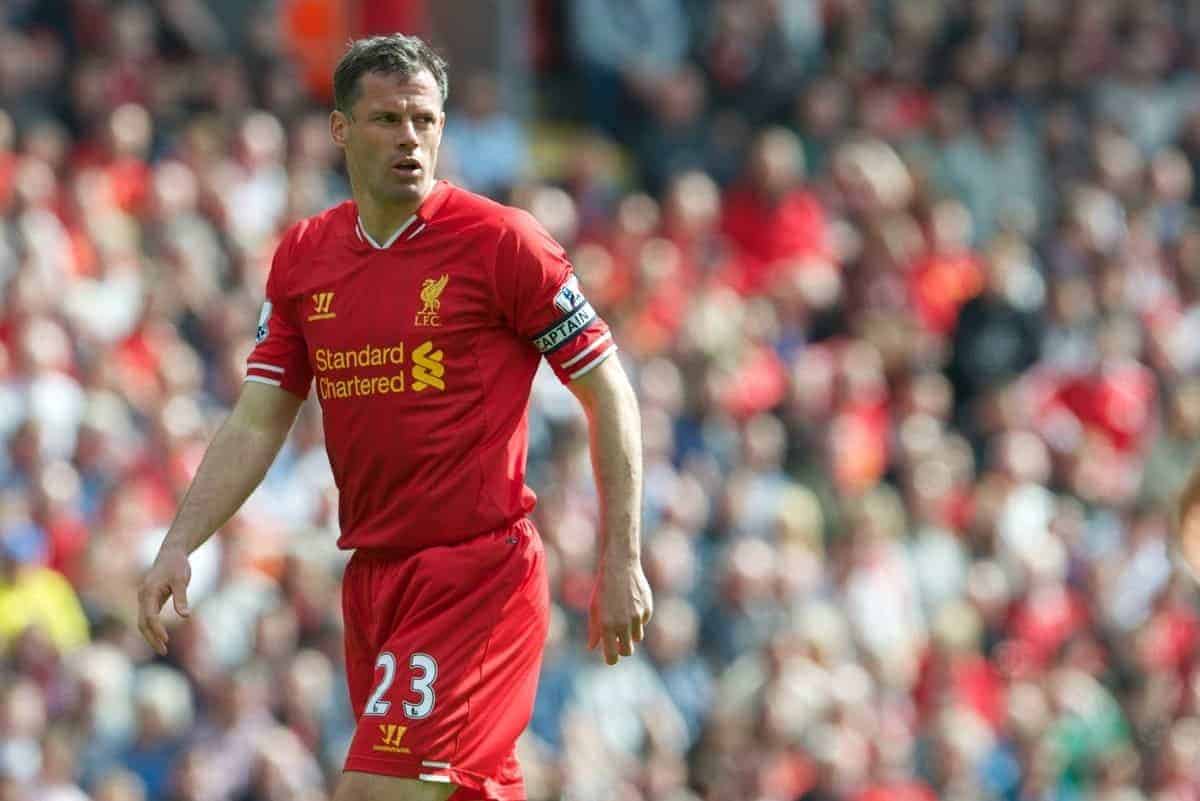 In an interview with the Mirror on Wednesday, former Liverpool hero Jimmy Case said he firmly believed that the Reds would have lifted the 2013/14 Premier League title had legendary centre-back Jamie Carragher not retired in the summer of 2012:

“Time will tell if they missed the boat, but Liverpool had an ­exceptional chance of winning the title last year. Obviously, Luis Suarez was instrumental in those 101 goals they scored but, when it came to the crunch, they just needed that little bit of extra ­know-how to get them over the line.

“I was part of a side who won it four times, and we knew what we had to do. Six months ago they just lacked that bit of experience, one streetwise old head, who might have made all the difference. If Carragher had stayed on for one more season, Liverpool would have won it.

“And those three goals in the last 10 minutes at Palace – I know, for a fact, that wouldn’t have happened if Jamie had been there to nip it in the bud when the first goal went in. He would have organised it and pulled down the shutters. Liverpool would not have let in as many goals as they did last season if Carragher had still been around, so it’s his fault!”

Case, who made 269 Liverpool appearances between 1975 and 1981, certainly offers an intriguing opinion on the matter, and one that not many have mentioned since Brendan Rodgers’ side fell agonisingly at the final hurdle last season.

So would Rodgers’ men have won their first league title since 1990 with ‘Carra’ in their ranks still? Or are his comments invalid?

Although, as Case stresses, the 36-year-old would not have featured too often – it would be wrong to assume he would have been consistently better than Martin Skrtel, Daniel Agger or Mamadou Sakho, given his advancing years – his sheer presence within the squad, and winning mentality, would have proved invaluable.

Much of his illustrious Reds career was spent playing in teams who could grind out wins, and who were difficult to beat; something lacking hugely in last season’s squad at times. He would surely have been an upgrade on the equally ageing but erratic Kolo Toure too.

In fairness, Rodgers’ side showed tremendous character and resilience in winning 11 games in a row between February and April, which got them firmly into the title race in the first place. Gritty wins away to the likes of Fulham, West Ham and Norwich were all achieved without Carragher.

As Case mentions, it was the two games against Chelsea and Crystal Palace where Carragher was missed immensely, however, and there is a definite argument to say they would never have surrendered against either side had he been playing.

Much is made of Gerrard’s ill-timed slip, but it’s easy to forget that the Reds still had an entire 45 minutes to get themselves level and, subsequently, made in the title hot-seat. It wasn’t a last-gasp error.

In that limp second-half performance back in April, there was lack of belief within the side, and panic set in. With Carragher on the pitch, his experience and passion would have shone through, and with Gerrard clearly rattled by his mistake, his influence would have proved vital.

The defending in the 3-3 draw with Palace, in which Liverpool had led 3-0 until late on in the game, was abysmal, and, as Case eludes to, there is absolutely no way it would have happened with Carragher on the pitch.

The entire back four crumbled under huge pressure, and although the loss to Chelsea gifted City the initiative and made them extremely strong favourites, the dropped points at Selhurst Park spelled the end of their title challenge.

Of course, we’ll never know whether Carragher delaying his retirement by 12 months would have altered Liverpool’s fate- Skrtel, who scored numerous crucial goals throughout the campaign, may not have played as much, for example- but it seems impossible to deny what having him around would have done great things to Rodgers’ young squad’s belief heading into two enormous games.

Liverpool are still looking for one of their centre-backs to fill the void left by Carragher, and his character, fight and consistency were missing more than ever on those two nightmare days back in May. It could all have been very different with the tenacious Scouser around.

What do you think? Would we have won the league with Carragher in the squad?