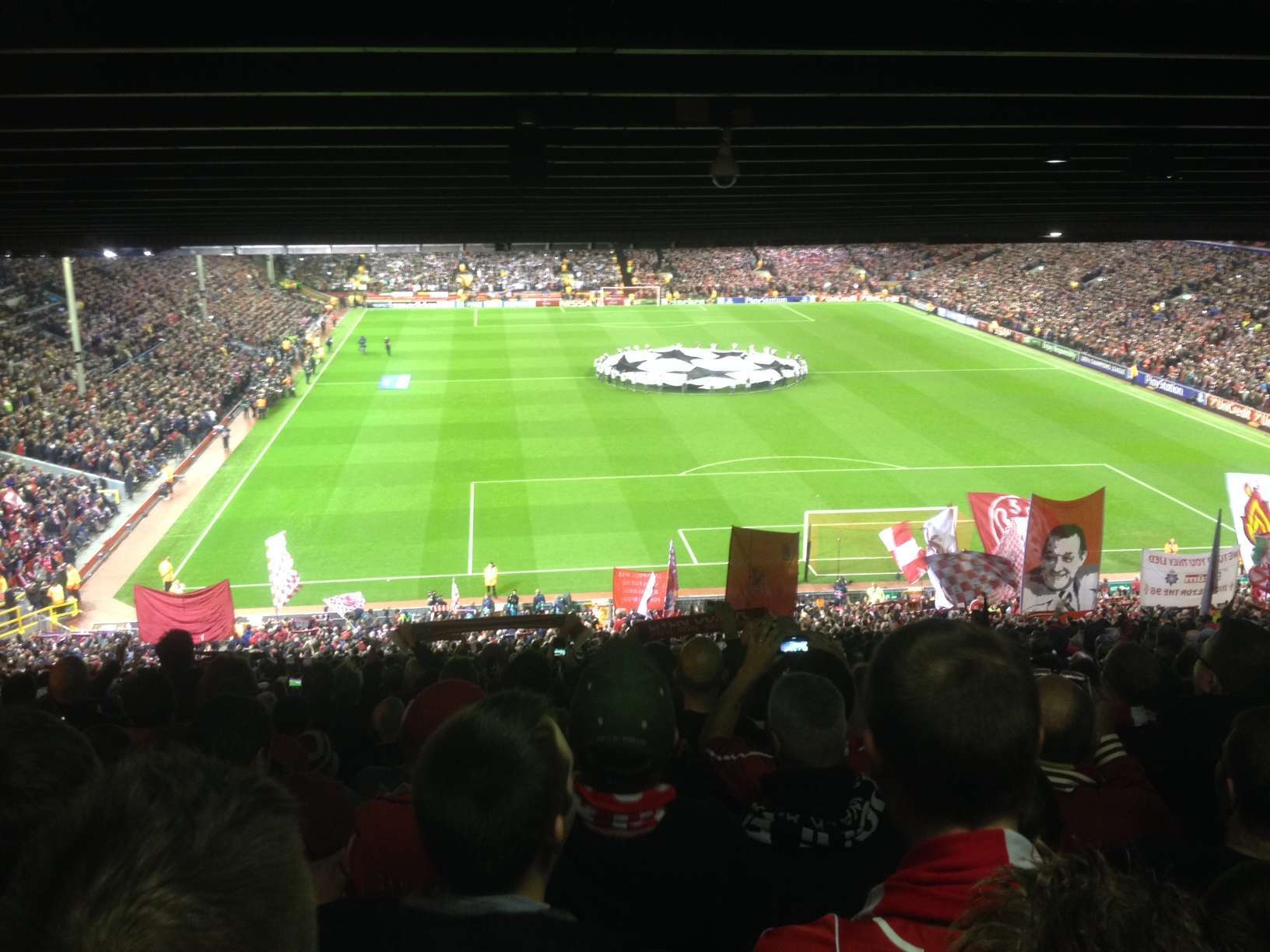 Ben Twelves provides a view from The Kop on Wednesday night’s defeat at the hands of the European champions. It promised to be such a special European night at a wet and windy Anfield on Wednesday. The floodlights were on, the Kop was standing in anticipation with not a single spare seat to be had and the big name opposition had arrived. All that needed to happen now was for Brendan Rodgers and his men to produce another memorable occasion.

Travelling to Anfield I have to admit I expected little from the match – with our form and their team almost handpicked from the world’s best talent, it just seemed like the impossible job. Nonetheless, I clung onto the performances and results of yesteryear in hope that we could nick something against what now is the strongest team in Europe.

Walking up to the ground there seemed to a be a glow around Anfield, which too was evidently felt by the Real Madrid under 19s side – who lost 3-2 against the young Reds earlier in the day – as they walked slowly in their eye-catching white coats, soaking up the atmosphere, taking and posing for snaps of and with the Anfield crowd and stadium designs.

As the rain started to come to down, and with shelter outside Anfield in short supply, I dashed to the turnstile to head into the Kop 50 minutes before kick off with my fingers crossed, behind a fellow Red who blessed himself as he walked in. It was that kind of night.

Mignolet was already out warming up – as was Iker Casillas down the other end – as I stood in row 19 and watched the rest of the Liverpool team follow to a deafening cheer and applause, with a huge feeling of pride that we’re competing with the best. These are nights the club lives for.

The clock ticked down, the Kop filled and 15 minutes before the first whistle, I headed up an eternity of stairs to row 72 – just four rows from the back – of a packed block 304 where my seat for the night was.

“Fields of Anfield Road” played, but it didn’t take long until I couldn’t hear it due to the screaming Reds singing it over it. A few chants for “Brendan Rodgers’ Liverpool” followed as the noise ratcheted up before You’ll Never Walk Alone kicked in.

As I stood and sung, I couldn’t help but notice the respect from the away fans who also looked to be stood, scarves aloft, singing along and videoing the memorable experience.

The music stopped but the Kop didn’t as the Champions League theme tune was drowned out, before the players dispersed to rapturous applause and a wall of noise from all four sides of Anfield. Madrid switched us around, and Casillas received a fantastic ovation as he took his position in the Kop goal – respectfully clapping back.

The whistle blew and the game began at an even quicker pace than the Kop moved through its song-list for the night, and an open start to the game lead to Anfield urging the team forward with Raheem Sterling almost racing in behind only to be hit by Alvaro Arbeloa who somehow went unpunished.

Liverpool were in the game, with Rodgers encouraging from the touchline, but he watched his side become increasingly open as Madrid displayed some mesmerising one and two touch play – much to the admiration of the knowledgeable Kopites – before Cristiano Ronaldo fired Real ahead with an excellent finish.

In a second, the noise and passion of the crowd was quashed and the silence was deafening.

Immediately the songs re-started as the crowd attempted to lift the players, but there was a realisation from that moment that the dream wasn’t going to be lived, and when Karim Benzema added a second seven minutes later with a free header looped over Mignolet, it was game over. The French striker added his second four minutes before half time after Liverpool inexplicably defended yet another set-piece abysmally allowing Benzema to knock the ball home. Frustration followed at conceding from yet another set-piece before Philippe Coutinho almost reduced the deficit straight after but his excellent strike smashed the post in the Reds’ best effort all night.

Coutinho hits the post from 25 yards. Needed that to go in.

Word began to spread that Mario Balotelli – who produced a few bright moments first half – had swapped his shirt leaving the pitch at half time and when he failed to reappear for the second half, discussions over his Liverpool future started, but only after conversations over the ‘defence’ had finished.

Adam Lallana took the Italians’ place as Liverpool tried to force their way back into the game but Carlo Ancelotti’s side took their foot off the pedal, and in truth only fantastic saves from Mignolet prevented Ronaldo making the score line look brutal, before the Portugal captain was then taken off and respectfully applauded upon his exit. In between renditions from a cathartic Kop of “Poor Scouser Tommy” and “A Liverbird Upon My Chest”, similar treatment followed for fellow substitutes Toni Kroos and Marcelo – who clearly had one eye on this weekends’ EL Clasico – as the Kop accepted they’d been beaten by the better team.

Nicola Rizzoli blew his whistle for one last time as the match ended in a deserved 3-0 defeat. Madrid’s travelling faithful and the Reds’ support exchanged applause with the Spaniards finishing the evening singing the name of our beloved club.