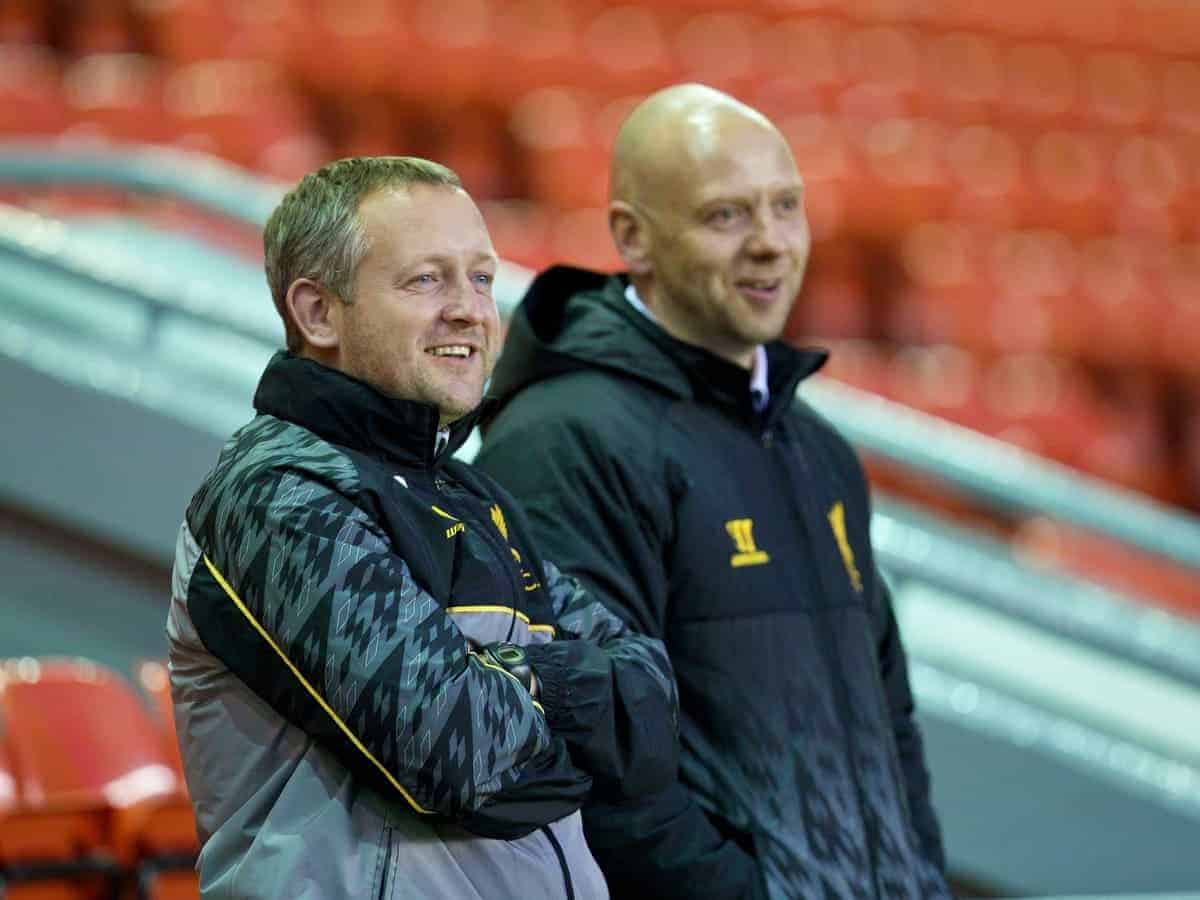 We speak to former Liverpool defender Rob Jones about his role at the Academy, his career and current affairs at the club.

Hi Rob, last season Brendan Rodgers brought you in to work with the Academy players alongside Robbie Fowler and Steve McManaman—how are you finding this role?

It’s been good. The three of us have our separate jobs, and when Brendan called me in it worked well for me.

He knew I was busy with my children’s nursery schools (Note: Rob now runs Kids Academy, a business of nurseries across the UK and the United Arab Emirates) and he just asked to give as much time as I can really.

That was good for me, I was doing my day-to-day job and just helping the Academy when I could but, this year I seem to be making more time because I’m enjoying it that much.

When Robbie Fowler goes and joins in with the centre-forwards and scoring goals, what better advice can you get than from a legend like Robbie?

It’s been good [for the players] and for the coaches learning off the likes of Robbie and Macca.

If I can pass as much experience as I can onto the younger lads, hopefully we can push them up from the Academy into the first team and that’s part of everyone’s job at the Academy.

Which current Academy players have impressed you most since your role began?

There’s been all different sorts, I don’t like mentioning too many names but obviously Jordan Rossiter and Jordan Williams, they’ve been at Melwood quite a lot and Brendan has seen what talent they’ve got.

He’s had them in the first-team squad there and obviously given them their chance in the Capital One Cup, which is good for all of the lads at the Academy.

Brendan, not like so many other clubs, he’s looking at if you’re good enough and you work hard you can push up to Melwood and he’ll give you the chance.

It’s given all the lads at the Academy, seeing Jordan Rossiter, that Brendan’s there to give you your chance.

One Academy graduate to stand out from the last few years in Jon Flanagan, whose rise into the Liverpool first team was similar to yours—do you think he can become a first team regular over the coming years?

The unfortunate thing for Jon, and similar to me: He was playing so well last season and he was becoming a regular right/left-back and he’s thrived in confidence, but picked up a pretty bad injury.

I know injuries are a part of football but that’s what sets you back, and the big test for Jon now is getting himself fit and getting himself back to the level that he was last season, which isn’t easy.

He’s got a big hill to climb but I’m sure he can do it.

There’s a lot of games to play, so there’s room for him and someone like Javier Manquillo to rotate as well.

He’s had an injury but I think a rest has done him well because he was away at the World Cup, so I think there’s possibly three right backs there.

You definitely need that rest every now and then and I could definitely see that difference in him.

And how about another graduate in Raheem Sterling, who hasn’t left the news lately—what are your thoughts on him telling Roy Hodgson he’s “tired?” Do you think it’s important for younger players to rest more often?

I think it is, and I’ve heard both sides of the story, and I’ve been there myself.

I came to Liverpool when I was 19 and there were a lot of injuries around the club, so I’d gone from fourth division football to Premier League football and I was playing twice a week, so it was a massive step for me.

I remember playing well, and the buzz of playing for Liverpool was getting me through but I did feel, in that first season, after I’d played 20 games on the trot I picked up a shin splints injury and I started to feel a bit jaded towards the end of that season because I’d literally played every game and I didn’t get a chance to rest.

So I think with Raheem the last couple of games he has looked a little bit tired in certain aspects of the game, and I think he made the right decision, a brave decision.

There’s been someone comments like ‘if I was on such-and-such a week how could I get tired?’ but it’s nothing like that.

What advice would you give Raheem in this situation?

Just what he knows himself. He knows how tired he was or is, and he’s made the first step, and the mature step, by coming out and telling Roy Hodgson he was tired.

He’s back at Liverpool now, let [Sterling and Rodgers] have a chat and if he feels fresh, let him play.

Your own Liverpool career started incredibly but ended with disappointment after a series of injuries—how do you feel about your time with the club?

It was a dream come true for me, being a Liverpool fan all my life, to get the dream call from Dario (Gradi, then Crewe Alexandra manager) that Liverpool and Graeme Souness wanted to buy me and wanted me to go to Melwood the next day.

Going to Anfield and Melwood on that Friday and then Souness saying ‘I’m going to be playing you on Sunday,’ live on TV against Manchester United, it was a dream come true for me.

To get the impact of going there and playing well and three months later Graham Taylor picking me for England, it was a whirlwind.

You rarely see that now, with a player being signed from the lower leagues and thrown in straight away, and play so well and so quickly as you did.

I was with Dario the other day, funnily enough, as he was at the Academy when we were playing Crewe and I said to him then that I think with the football that Crewe played then, even in the fourth division, we weren’t a team that’d just kick it up in the air.

Dario wanted to play football, always trying to keep it on the ground, sort of like the Liverpool way.

I feel that when I did move up that step that the adjustment was pretty easy because I was used to playing football and that’s why I fitted in so well to the way Liverpool were playing.

Liverpool have been linked with a player, Dele Alli from MK Dons, recently, and he’s in League One, so do you think a player can still be signed from that level and break into the team?

Some players come to big clubs and are a bit overawed possibly and not doing as well. It’s a bit of a blur now but one day I was on the Kop watching John Barnes, Steve Nicol, Ronnie Whelan and Bruce Grobbelaar, and the next day I was on that pitch playing with them.

But I think if you’re good enough there’s no reason why you can’t come straight up and into the first team.

You played under Graeme Souness, Roy Evans and briefly Gerard Houllier: Which Liverpool manager did you most enjoy working under?

It was definitely good working under Graeme, Graeme bought me so I respect him for that.

But he had a bit of a hard time not doing too well passing on some of the more experienced players, and the results didn’t go his way, and when Roy took over he was just as good [to me].

Roy’s a gentleman, a few people were saying he was too soft but Roy, with the experience he had, balanced his job perfectly. If you did something wrong you’d definitely be getting a telling off and he’d had Ronnie Moran behind him backing him up.

Just because he was a nice man, doesn’t mean he was a soft manager.

I’d put them both together. Different managers, different personalities but Graeme and Roy, I like the pair of them.

Liverpool under Rodgers seems a lot different to some of the club’s other recent managers, and more like the days of Evans again—what do you feel has changed at the club from when you were a player there and from your experiences now?

I think with instances now where we’re working hard to bring young lads through, and every club’s now a lot more involved with the everyday running of a player.

Brendan Rodgers himself, the first time I met him was when he offered me the part-time role and you could just see the way he welcomed me and talked to me and the way he talks to first-team players right down to the Academy lads, he brings himself across really well and makes you feel really welcome.

Tactically as a coach as well, you see him working at Melwood, he’s very very good.

Brendan is in regular contact with Alex Inglethorpe, as head of the Academy, and Brendan will say ‘who’s impressed you in training?’ or ‘who’s been playing well at the moment?’

Alex will give him names and they’ll go up to Melwood for a few days and train with the likes of Gerrard and Mario Balotelli and gain that bit of experience. So gradually, if you make the move up eventually, you’ve been to Melwood and it’s not such a big move.

And finally, what are your predictions for the season ahead?

With the buys we’ve made in the summer we’ve definitely strengthened the squad, and I can remember last season when Luis Suarez wasn’t in the team for the first eight games we were playing some really good stuff, but just getting that little bit of luck as well.

This year we’re playing well in some games but just not getting those 1-0’s and getting the three points which is a big difference.

We’ve had quite a few new players come in and it’s taken them a little while to adapt, with Adam Lallana I think in the last two or three games he’s really come on and looking really promising.

With Balotelli, we’ll just have to see what happens there, and with Daniel Sturridge I think he’s coming back in for the next game—I think we just need some goalscorers.

I definitely think, though people write us off the top four but I think if we put a good run together now there’s no reason why we can’t finish in the top four.

Thanks to Rob for answering our questions, you can purchase Rob’s autobiography ‘Robbed: My Liverpool Life’, here.