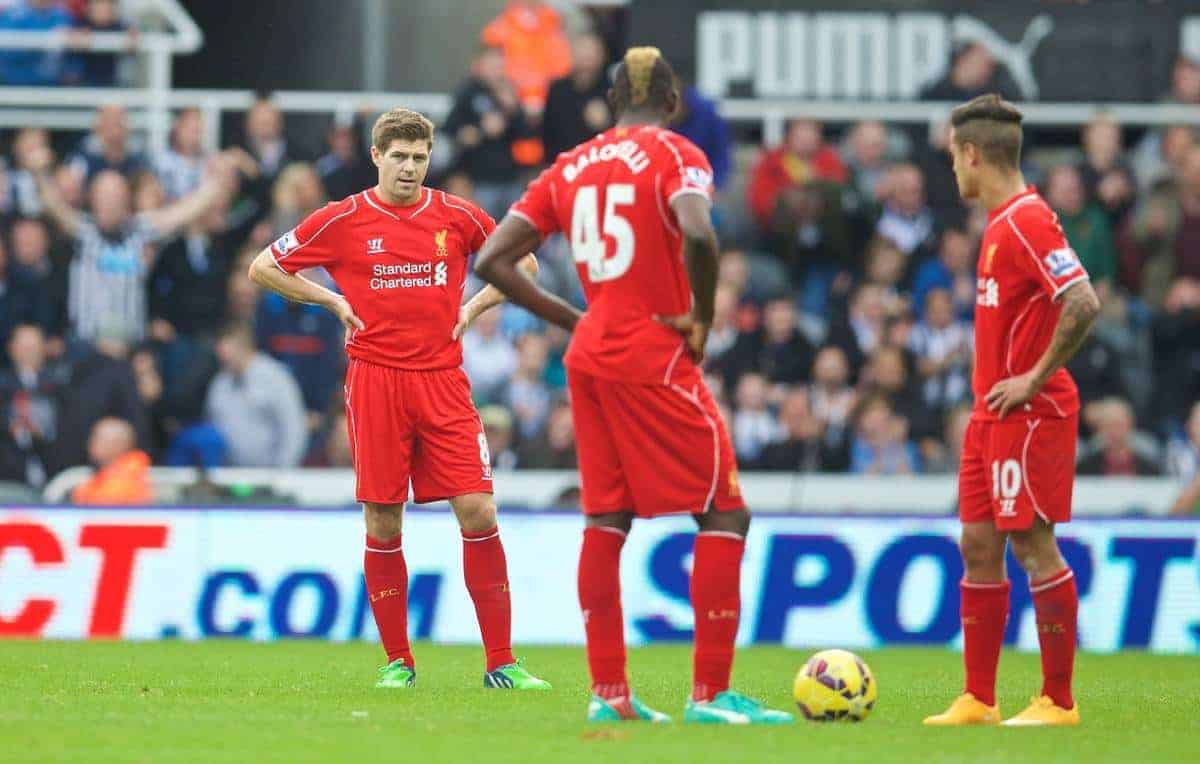 10 games in – it’s time to take a look at the table; unfortunately, it doesn’t make for pleasant reading for the Reds. Oliver Smith on Liverpool’s start to the season.

It is a widely accepted footballing adage that the Premier League table only begins to provide a true reflection of how teams will fare over the course of the season once ten matches have been played. Although the rigid application of that principle would lead us to back Southampton to be title contenders and Big Sam’s West Ham to push for Champions League qualification, it seems sensible to suggest that a sound judgement on a team’s prospects can be made after just over a quarter of the campaign has been completed.

On that basis, things aren’t looking good for Liverpool. With only four wins and the same number of defeats, the Reds lie in 7th place. After finishing the 2013/2014 season as runners up, their fall from grace has been steep and deeply unpleasant. It feels like Liverpool have gone back a season and, after coming so close to finally clinching the Premier League title that Kopites long for, they are back at square one.

Perhaps what makes it all too difficult for Liverpool fans to take is the stark fall in the quality of performances produced by the Merseysiders. Last season, we knew we were in for a treat every week, as the SAS inspired Reds steamrolled all before them in a captivating manner reminiscent of the great Liverpool sides of the 70s and 80s.

Sure, they were conceding a silly amount of goals, but they were scoring an even more ludicrous number down the other end, so it didn’t matter and we were happy watching football that reminded us why we fell in love with the beautiful game, and Liverpool, in the first place.

Nowadays, dare I say, it’s almost become a chore to watch Liverpool games due to the abysmal quality of their performances. We no longer look forward to matches expecting another attacking master class from Rodgers’ Reds, but rather anticipate complaining about defensive mistakes and lamenting how much worse Balotelli is than Luis Suarez once again.

It’s all very depressing, if not entirely surprising. We always knew this was going to be a season of transition following the departure of Suarez and the arrival of a raft of new signings over the summer. It’s almost impossible for a squad containing eight new faces to gel instantly and any team would be weaker after losing a player of Suarez’s quality.

What’s important now is learning from the mistakes made in the opening ten games and working to rectify them going forward. Specifically, there are three things that manager Brendan Rodgers has to do:

According to the statistics, the Reds’ backline is as bad- or as good! – as it was last season. That might surprise some, but Liverpool have conceded an average of 1.3 goals per game this season, which is identical to the average amount that they conceded over the course of 90 minutes in the 2013/2014 campaign.

The main reason Liverpool’s defence has looked leakier this season is because the Reds have also only averaged scoring 1.3 goals per game, whereas last season they fired in 2.7 goals per game on average. Put simply, the back four has no place to hide now that Suarez has left and Sturridge is injured.

Rodgers has received a measly return on his approximately £35 million investment in his defence over the summer. Sloppy goals are routinely conceded, particularly from set pieces, and the defence looks disjointed and nervous whenever pressurised by opponents.

This has got to change if the Reds’ fortunes are to be reversed, and it must be a priority on the training field. In fact, Rodgers might want to consider bringing Liverpool legend Jamie Carragher back to the club as a defensive coach. His experience and expertise could come in handy and he’s the no-nonsense type who wouldn’t tolerate the persistently poor performances put in by the Liverpool defence.

2. Find an answer to the Balotelli question

How do you solve a problem like Balotelli? That’s the question on every Kopites lips right now, and one that Rodgers must find the answer to urgently. The £16 million summer signing from AC Milan has had to shoulder the responsibility of leading the Liverpool line in place of Suarez and Sturridge, but has failed to live up to expectations, scoring just twice.

Perhaps worst of all, he clearly has an attitude problem that Rodgers needs to resolve as a matter of first importance. If there is any chance of Balotelli being a long term success at Anfield, he must adopt the mentality of the Liverpool Way, which is currently entirely alien to the self-absorbed 24-year old.

Additionally, Balotelli has also suffered from isolation up front by himself and should be partnered with Fabio Borini, at least for a trial period while Rodgers tries to work out how to get Liverpool scoring goals again. The Italian pair linked up encouragingly against Swansea in the League Cup and it cannot do any harm to at least give them a go working together up top.

3. Work out what his best starting line-up and preferred formation are

It’s good that Liverpool have a deeper squad and that Rodgers has more options to choose from this season. While competing on four fronts, reinforcements are needed, and the benefits of having a big squad were demonstrated against Swansea in the League Cup, when Rodgers made nine changes but still had a starting eleven containing multi-million pound purchases such as Lazar Markovic and Dejan Lovren.

However, it’s equally important that Rodgers works out what his best team is and what formation suits them best. Currently, the Northern Irishman seems most confused about his preferred midfield. Perhaps because of the array of options available to him, he seems unsure how to make the most out of them. Gerrard, Allen, Henderson, Can and Lucas are all competing for a more defensive midfield role, while Coutinho, Lallana, Sterling and Markovic fight for more attacking roles behind Balotelli and possibly Borini as well.

Rodgers has to work out which four or five out of those nine are his preferred starters and craft a system that restores the attacking verve and creativity of the Reds’ midfield last season.

Action needs to be taken to address the issues raised during the first ten games of the season and reverse the Reds’ decline. However, the situation isn’t as hopeless as many, particularly in the media, are portraying. Yes, Liverpool have started the season poorly, but they remain only three points outside the Champions League places, their European fate remains in their own hands and they have reached the quarter-finals of the League Cup.

The aim now should be to remain within touching distance of the top four and reach the knockout stages of the Champions League and the semi-finals of the League Cup by the New Year. Those are achievable targets and, if met, should see Liverpool in good stead heading into 2015. By that point, Sturridge should be back and Rodgers will be able to enter the January transfer window as well.

As depressing as the opening ten matches have been, there is still hope for the remaining 28.