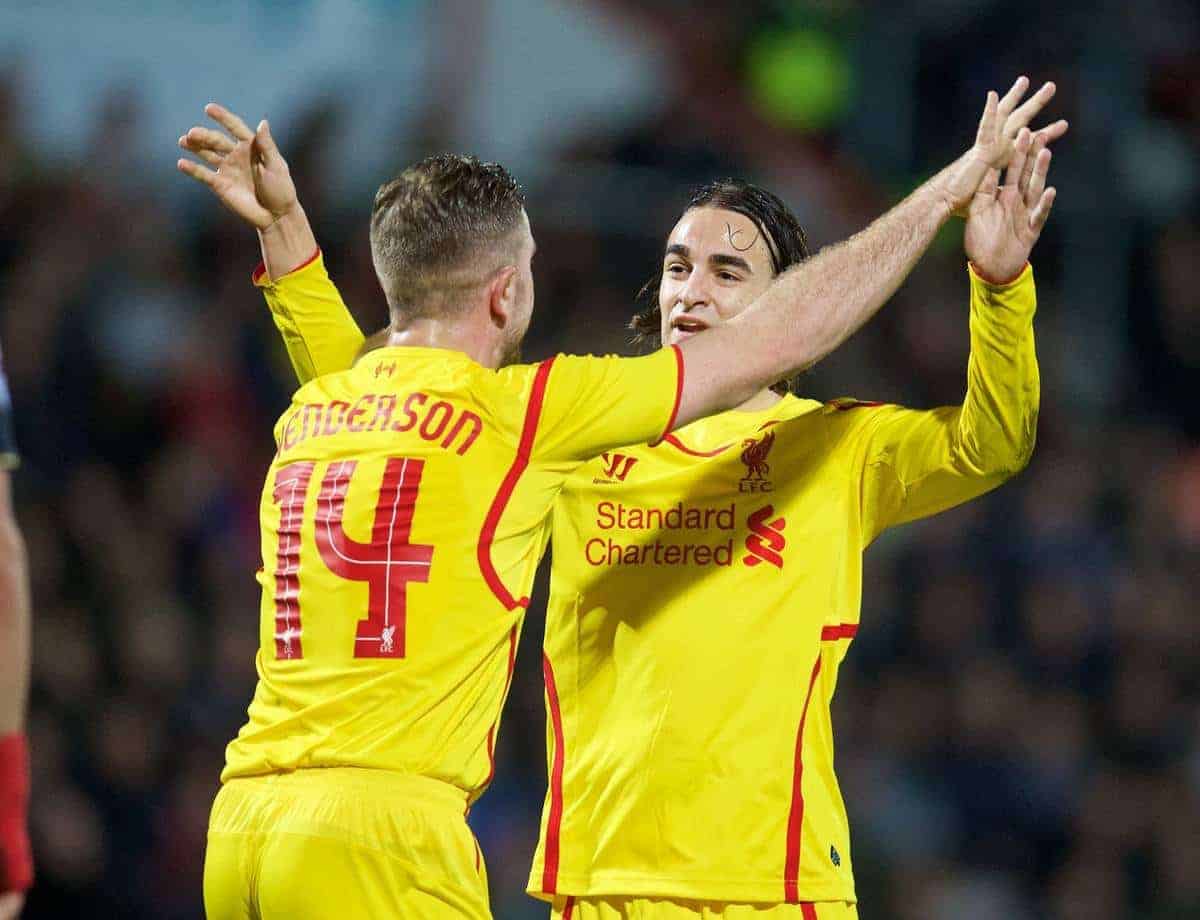 Liverpool progressed to the semi-finals of the League Cup for the 15th time after overcoming Championship league leaders Bournemouth. Ben Twelves picks five talking points from the victory. Goals from Raheem Sterling either side of Lazar Markovic’s composed strike guided Liverpool into the next round of the competition, where they’ll face a tough two legged affair against Premier League table toppers Chelsea.

Buzzing we're in the semi finals!!! Well done to the lads and Raz for notching a couple. Also Lazar for scoring his first goal for LFC.

It was once again a much better attacking display from the Reds for the second game running in the new 3-4-2-1 system, though defensively there were still a few nervy moments as Bournemouth pushed for a way back into the match which did see them notch what proved to be only a consolation effort.

It was another small step in the right direction for Rodgers and his team ahead of Arsenal’s arrival at Anfield on Sunday afternoon, and there were a number of positives for the first time in a long while, despite the few negatives on the night.

Attack on the way back

The three man attack of Sterling joined by Adam Lallana and Philippe Coutinho proved a dangerous combination again and this time Liverpool had the goals to show for the intricate work in the final third of the pitch.

There was again much more fluidity to the Reds’ attacking play, with the influential Lallana and Coutinho linking well on a number of occasions – especially in the first half – and movement off the back was infinitely improved with all three players picking up intelligent positions between the Bournemouth lines.

Great to see we're getting our attacking mojo back. A continuation from Sunday

The improvement was epitomised with the first goal – a fantastic team effort – that boasted the flair, creativity and ruthlessness in front of goal that has been missing so far this campaign and it was far more enjoyable watching Liverpool edging closer towards full flow.

Jones kept his place in the team despite an uninspiring performance at Old Trafford on Sunday as Simon Mignolet drops to the bench ‘indefinitely’ but once again the Australian ‘keeper failed to impress on the night.

A number of sliced and unconvincing clearances – reminiscent of the benched Belgian – put Liverpool on the back foot on a couple of occasions and while the goal conceded wasn’t entirely his fault, Jones should have done a lot better with Dan Gosling’s weak strike that crept underneath him.

Still, thats 3 out of 4 goals I think Mignolet would have kept out.

It could be argued that Bournemouth’s consolation is the third goal that the second-choice ‘keeper should at least have dealt better with, of four conceded in the last two games, and even though Mignolet rightly had his fair share of criticism, Jones shows little sign that he can offer anything above the Belgium international who has proven to be a better shot stopper at least.

Overuse of Sterling and Gerrard? On a largely positive night for Rodgers and his team, the Liverpool manager did produce a negative at the Goldsands Stadium where his use of substitutes available proved a frustrating feat.

After playing back-to-back 90 minutes against Basel and Manchester United on Sunday, Steven Gerrard needed to be preserved as best as possible ahead of another tough clash against Arsenal, as did Raheem Sterling – who has played the most minutes of an outfield player in the Premier League – but instead the duo played all but stoppage time together.

Emre Can was the logical man to come on and he did, but disappointingly it was for Coutinho when the Captain’s needs were far greater and with Rickie Lambert and Fabio Borini options from the bench, the Italian was introduced for additional time replacing Gerrard rather than after Sterling grabbed his second of the night early in the second half.

Ahead of a big game on Sunday, Rodgers should have worked better to afford key players as much resting time as possible.

Lazar and Lallana come to life

A much improved Liverpool attack for the second successive match came in no small part to the excellent work of Lazar Markovic and Adam Lallana – who was arguably the Reds’ man of the match on the night.

Only thing I don't like about Lallana tonight is his haircut. Got a great first touch and always takes the ball on the move.

Lallana was hugely influential for Rodgers’ improved side going forwards with his tidy footwork and clever play between the lines causing issues for the home side, and he displayed some excellent link-up play with Coutinho and Sterling throughout – almost opening the scoring himself with a scorching left foot strike after a quick exchange with the Brazilian.

Recent impressive cameo displays saw Markovic handed a rare start, and the pacey Serbian didn’t disappoint as he played a fundamental part in Sterling’s opening goal before registering on the score-sheet himself seven minutes later with a composed finish.

The 20-year-old – deployed on wide on the left of a four man midfield – offered an outlet for Liverpool with his direct style proving dangerous throughout and he took on board the defensive duties that come with the role – tracking back and helping both Dejan Lovren and Mamadou Sakho a number of times – particularly second half.

Impressive performances from both of the summer arrivals should see them start again on Sunday.

Sterling shines as the striker

Bagging a well taken brace on the night, Sterling proved his ability to play as a striker – hitting back at premature claims that the role isn’t for him after his goalless showing at Old Trafford. The 20-year-old’s pace caused huge problems for the Bournemouth backline throughout – and his direct threat in behind the opposition defence allowed for the attacking play-makers to work in the space opened up by his lightning speed.

Strikers will be judged on goals and Sterling notched twice with a well taken glancing header from Jordan Henderson’s header back and a composed finish after turning Tommy Elphick inside-out having been released by the impressive Lallana.

Great finish from Sterling. #LFC 3-0 up and cruising.

He almost grabbed his first hat-trick for the club too, but Sterling sliced his effort wide of the near post after a clever flick from the former Southampton man once again created the opportunity.

Sterling’s lack of a finishing touch overshadowed a good performance in the new position on Sunday, but he illustrated perfectly his capability as a genuine striking option going forwards.

Good win that when you're on a bad run. Sterling did the damage but Lallana mom he must become one of the first names on the team sheet!