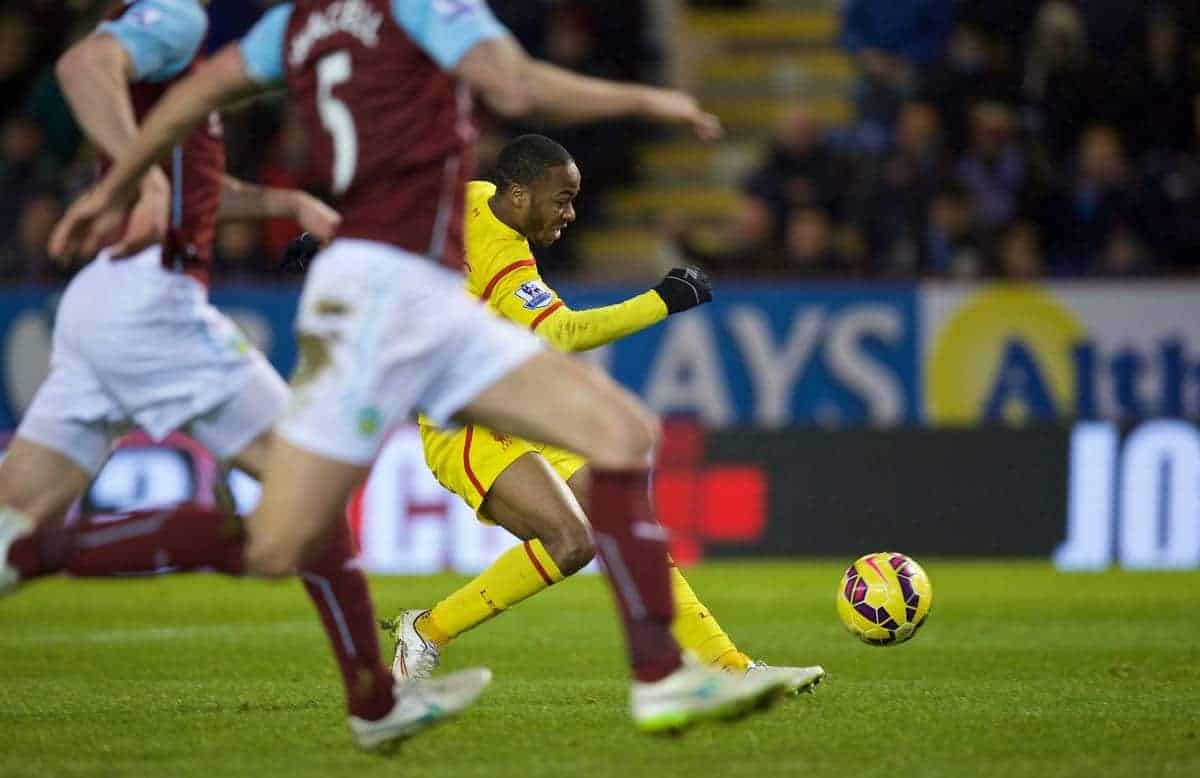 Liverpool earned a hard-fought three points against Burnley on Boxing Day, with Raheem Sterling’s second-half effort the difference between the two sides at Turf Moor. A busy run of festive fixtures for Liverpool got underway at Turf Moor, with three points paramount in their quest for a top-four finish.

Brendan Rodgers named an unchanged team for the first time this season, with Mamadou Sakho keeping his place at the back, Jordan Henderson and Lazar Markovic starting as wing-backs again and Raheem Sterling continuing up front.

17-year-old Sheyi Ojo was included in the matchday squad, having impressed hugely in the Reds’ youth team of late.

Danny Ings almost stole in after poor defensive work from Henderson in the first few minutes, while Sterling dragged an effort wide for Liverpool. It was an otherwise low-key start to the game.

Rodgers’ side looked a threat going forward early on, but their final ball was lacking. Philippe Coutinho‘s deflected shot was stopped comfortably by Tom Heaton.

In the 14th minute, Ings hit the post for Burnley, acting as a warning sign to the visitors. Simon Mignolet came on for the injured Brad Jones a minute later; it was a chance for the Belgian to re-establish himself as Liverpool’s first-choice goalkeeper.

The hosts enjoyed a sustained spell of dominance, and the Reds were suddenly looking a little sluggish. Ings charged down Mignolet’s kick, which almost ended in catastrophe for the 26-year-old.

After 25 minutes, Liverpool had been a shadow of the team who drew with Arsenal on Sunday. The service to Sterling had been poor, while the 20-year-old’s touch was off too.

Adam Lallana tested Heaton after a terrific pass by Steven Gerrard, but it was Burnley who continued to be much the better side. Scott Arfield’s shot was going in, but Lucas’ excellent block diverted the ball wide.

The impressive George Boyd also fired over, and Mignolet did well to deny Arfield. At half-time it was goalless, and a lethargic Liverpool had to improve drastically. Emre Can came on for Kolo Toure at the interval, with the young German deployed at centre-back and with the 3-4-2-1 formation kept the same.

The early signs in the second-half were that Liverpool had not learned from their first-half errors, and there was a real lack of a spark about them. A wasteful 56th-minute cross by Can epitomised the performance.

Out of nowhere, however, the Reds were in front. Coutinho’s clever through-ball found Sterling, who rounded Heaton and finished clinically with his left foot. It was not remotely deserved, but sometimes scoring against the run of play can be priceless.

Mignolet denied Arfield secdonds later, and a series of corners for the hosts showed that the game was far from over.

A bizarre moment from the Reds’ goalkeeper saw him inexcusably let a back-pass roll out for a corner, and Kieran Trippier almost scored from the resulting set-piece. It summed up his lack of confidence and focus right now.

Coutinho’s terrific effort from range deflected wide, and with 15 minutes remaining, Liverpool still had plenty of work to do to earn all three points.

Substitute Rickie Lambert had a goal ruled out for offside, while at the other end the Clarets were giving it their all to find a late equaliser. The remaining 10 minutes were sure to be a big test of the Reds’ defensive qualities.

Despite a few minor scares Rodgers’ men saw the game out, earning a gritty three points in the process. A win is a win at the end of the day.