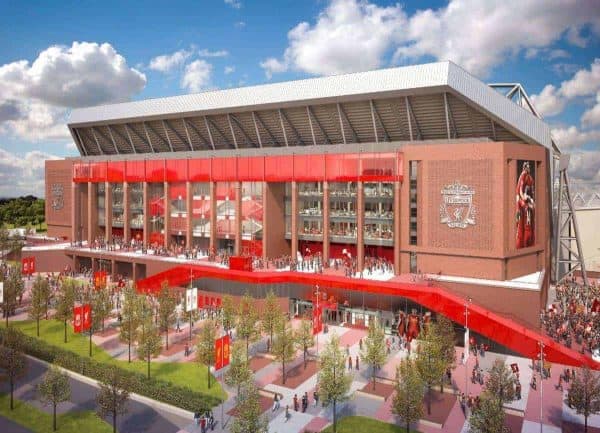 The construction project, initially on the Main Stand and then on the Anfield Road End, will eventually see Anfield’s capacity raised from 45,000 to 59,000.

The work is part of a wider £260 million regeneration of the Anfield area and will also see a new fan park erected and the Hillsborough memorial and Shankly gates relocated.

Phase one of the project will see an additional 8,300 seats added to the Main Stand, before phase two adds 4,800 seats to the Anfield Road End.

Matches will go ahead as planned during the construction, and it enables the stadium to host big international fixtures and European finals.

In terms of cost, Andy Hunter of The Guardian writes:

Liverpool are spending £75m on the construction of the stand but the overall cost, including the acquisition of land, will be around £114m, an additional £39m. The interest-free loan provided from FSG’s cash reserves is scheduled to be repaid over the relatively short timeframe of five to five-and-a-half years.

The number of hospitality seats in the Main Stand will rise from 3,500 to 7,000 and new executive boxes will line the stand after phase one is completed — something which Ayre staunchly defended in a press conference to confirm the plans on Thursday.

“I don’t think there’s a football club in the country who could afford to spend money on a new stand without the assistance of corporate hospitality. It pays,” he told the media. “It will probably pay two thirds or more of the payback of this facility and that is a fact of life. You can’t find economic solutions that work in big new stadiums that don’t have corporate.

“We will still be some way behind the corporate hospitality numbers they have at Old Trafford and probably around the same sort of level they do at Arsenal. That feels right for the model we have created.

“The overall percentage of corporates when we finish will not be that dissimilar from today. We are increasing capacity and keeping the corporate seats in line as a percentage. We know the demand is there for both.

“Driving prices in those corporate areas helps. People often point at the corporate fans and say they are not real fans or whatever, but the reality is they make a huge contribution to the football club and keep ticket prices at the level they are. Without them, the revenues would be much smaller and if other costs were at the same level, everybody else would get hit in some form: sponsors, general admission prices, everyone.”

The stadium expansion confirmation and Ayre’s comments come in the same week that supporters groups Spirit of Shankly and Spion Kop 1906 upped their protest at rising ticket prices.

After a letter to club owner John Henry, they are set to meet the club to discuss ticket prices next week.

What do you think of Liverpool’s expansion of Anfield and the increase in corporate hospitality? Let us know your thoughts in the comments below, or for general Liverpool FC debate, head to our forums.