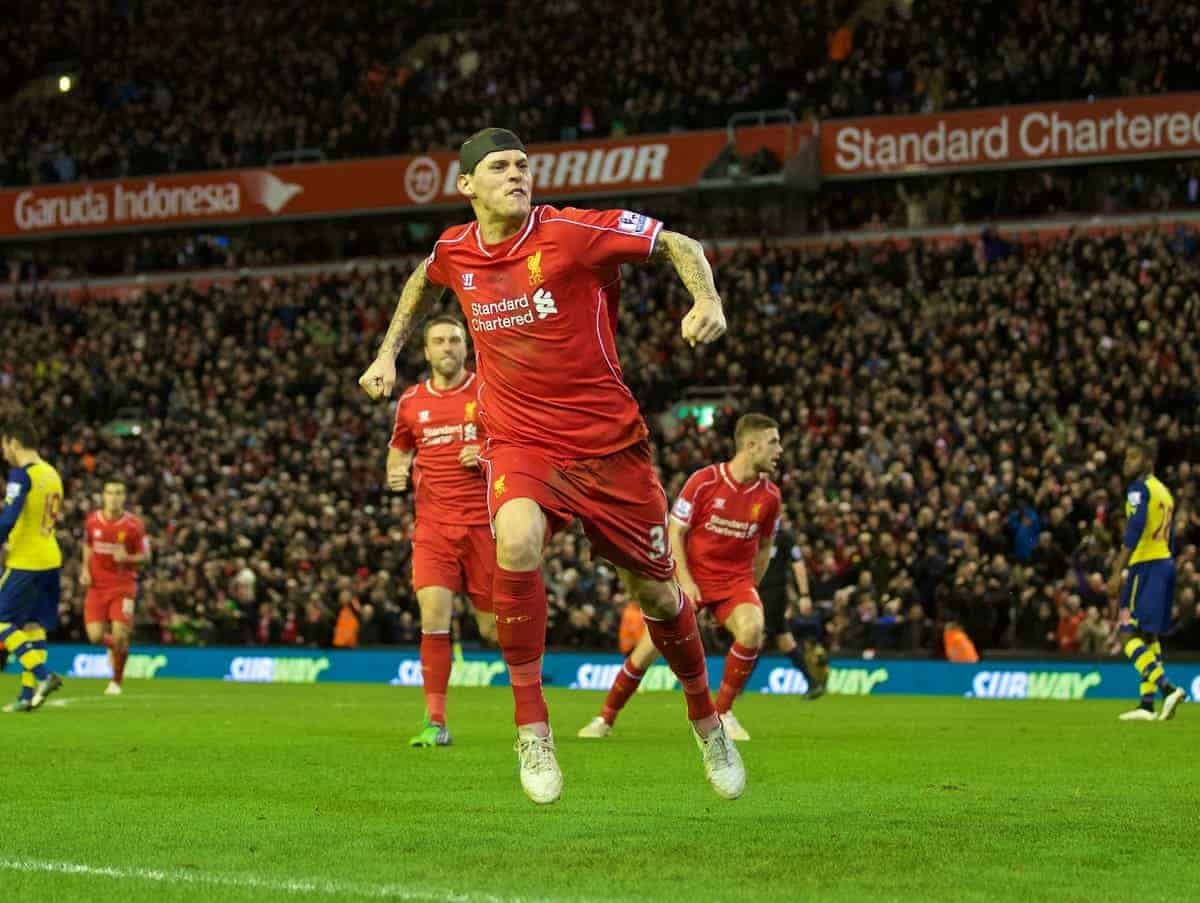 Liverpool drew 2-2 with Arsenal at Anfield on Sunday, and they were the better team from start to finish. Martin Skrtel’s stoppage-time header earned the Reds a point.

Liverpool faced Arsenal in a crucial Premier League clash at Anfied, with both sides vying for a top-four finish. Defeat for the Reds would be disastrous.

Brendan Rodgers made just one change to the side that defeated Bournemouth 3-1 on Wednesday, with Mamadou Sakho coming in for the injured Dejan Lovren.

Jordan Henderson and Lazar Markovic continued in their recent wing-back roles, with Raheem Sterling playing up front once more.

Steven Gerrard hit an early free-kick wide and Adam Lallana fired over, but it was a relatively quiet opening to proceedings as both sides tried to feel each other out a little.

Liverpool were dominant though, with the Gunners barely mustering an attack in the first 20 minutes. The Reds needed to score while they were on top.

Philippe Coutinho tested Wojciech Szczesny from range after 29 minutes, and Markovic saw his poked effort kept out well by the Pole. The Serb then shot over from the edge of the box.

Just as it looked as though it would be goalless at the break, Liverpool struck after 44 minutes. Henderson’s pass found Coutinho, and the Brazilian shifted the ball onto his right foot and fired it into the net off the post.

Unbelievably, it was 1-1 seconds later. Mathieu Debuchy headed home from close-range, but Martin Skrtel had to do better against the Frenchman in the air. It was a travesty of a scoreline at the break.

There were no changes at the interval, as the Reds attempted to kick on and earn a valuable three points.

Coutinho flashed an effort wide two minutes after the restart, while Santi Cazorla blazed over from 25 yards out at the other end. Skrtel picked up a nasty head injury which required a lengthy stoppage, but the Slovakian remained on the pitch.

Lucas fired into the Kop crowd, while Gerrard skewed an effort wide and then headed over. Giroud then curled wide. There were plenty of chances being created.

The Reds were behind after 64 minutes, and it was Giroud who got it. The Frenchman exchanged passes with Cazorla, before finishing clinically underneath Brad Jones. It was a joke of a scoreline, but once again highlighted Liverpool’s inability to be ruthless.

The Reds continued to dominate, with Gerrard twice trying his lucky and Sterling almost getting in a couple of times. Lucas then sliced a shot just wide after a rare charge into the box.

It was another one of those deeply frustrating afternoons, and with 10 minutes remaining Liverpool were desperately in need of an equaliser.

Borini was sent-off for a second yellow card after a challenge on Cazorla in the dying embers, but there was still time for amazing drama.

Skrtel bulleted home a header in the 96th minute, salvaging a vital point for his side. It had been an enthralling afternoon on Merseyside.