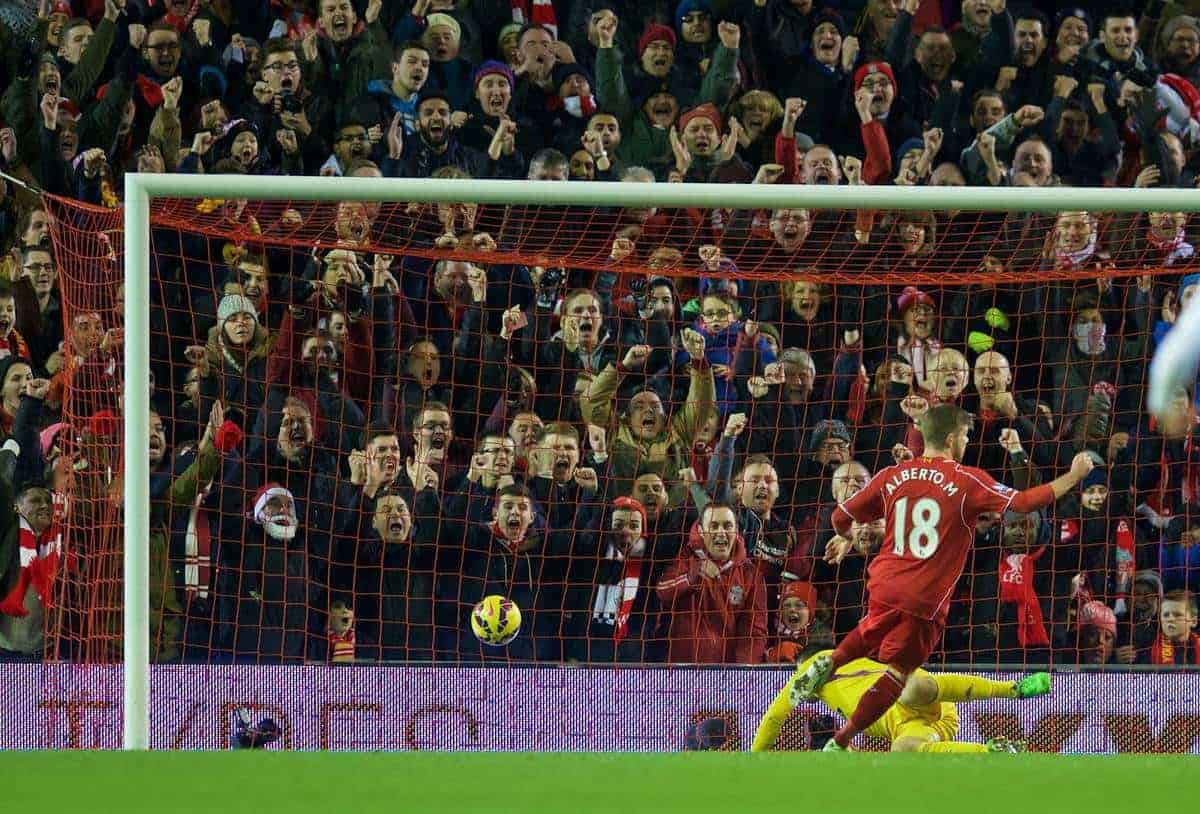 Alberto Moreno and Javier Manquillo both produced excellent performances on their return to the Liverpool team in the 4-1 win over Swansea, and they provide the perfect combination in the wide positions, writes Ben Twelves. Brendan Rodgers’ tactical switch to the 3-4-2-1 system has started to bear fruits in recent fixtures – with Liverpool picking up 7 points from the last 9 available – and the new formation that has played to many members of the squads’ strengths has sparked a welcome revival.

Adam Lallana and Philippe Coutinho have come to life in preferred central roles where their link play with Raheem Sterling has seen Liverpool become much more dangerous in attack, and the switch to three at the back has allowed Mamadou Sakho and the impressive Emre Can to provide some needed stability defensively.

Those five players have flourished as a result of the change of shape, which has seen the Reds deploy wing-backs –of which were Javier Manquillo and Alberto Moreno on Monday night – and the two Spaniards certainly add another positive to the system.

(All stats via whoscored.com, Opta & Squawka)

Coming into the side for Lazar Markovic at left wing-back for his first start since Liverpool’s loss at Old Trafford, the attack-minded defender notched his second goal for the club – his first at Anfield – in an excellent display, and the 22-year-old showed why he is tailor-made for the role.

Marauding from deep both with and without the ball using his electric pace, Moreno played a vital part in the move that lead to him then smashing the ball home from Jordan Henderson’s teasing cross to give Liverpool the lead.

Naturally an adventurous player, Moreno loves to bomb forward at the earliest opportunity to contribute to the attacking phases of play as he did through the game on Monday night, and with the stability of Sakho behind him, the Spain under-21 international could afford to be that more gung-ho in racing forward to join the fluid attack – signalled by the fact he created two chances alongside his goal.

5 things we learned from last night's win – including how Moreno shines in 3421 system: http://t.co/hW6CYPTOw3 pic.twitter.com/0XB5fMjlIa

Moreno dashed forward safe in the knowledge that the French left sided defender was behind him but he also provided Sakho with defensive protection – making three tackles, one interception and one clearance – before haring off once more to link with the dangerous duo of Lallana and Coutinho.

The more defensively focussed Manquillo also made a return to the starting team for the 4-1 victory, and he complimented his fellow countryman perfectly on the opposite side, providing a steady balance defensively for the Reds.

The Atletico Madrid loaned man is certainly not as natural or productive in the final third as his Spanish counterpart – Manquillo didn’t create a single chance, register a shout, nor play a key pass – but while the left wing-back is high up the pitch and contributing to the Liverpool attack, the right back provided an extra bit of defensive security ahead of the composed Emre Can.

Retweet if Emre Can was your #LFC man of the match against Swansea… pic.twitter.com/W1zSz3oIBg

With the German’s ability to carry the ball out of defence and Moreno racing forward at any given opportunity, Manquillo was slightly more conservative in his positioning; playing closer to Can – guarding against open space for the visitors to exploit – and the 20-year-old made the joint most tackles of any Liverpool player on the night, made two interceptions and was on hand to make a clearance on three occasions.

Manquillo’s defensive instinct perfectly complimented his teammates as he produced a solid if unspectacular display in contrast to the care-free Moreno.

Serbian attacker Markovic has occupied both wing-back roles in recent weeks as he produced some impressive displays, but naturally being a forward player, the summer signing was doing a job in the position as his performances warranted a starting place.

The former Benfica man did impress while playing in an unnatural position, but it’s clearly not his favoured role, likewise with Henderson – who produced a far more influential performance back in the middle of the park against Gary Monk’s men.

Think this system suits Manquillo and Moreno to a tee. May give Markovic the chance to play further up the pitch even though he looked good.

With the Spanish youngsters proving their capabilities as the wing-back pairing, Markovic can now concentrate on his natural game and providing a threatening option in the front three of Liverpool’s revitalised attack with opportunities set to arise during a continuing hectic period for Rodgers and his team.

A perfect combination has been struck with the Spanish duo either side of the Reds defence and midfield with their contrasting styles, and the pair illustrated nicely how they can aid the team both in attack and defensively.

Moreno was the more dangerous attacking prospect throughout, recognised by Coutinho who played closely with the former Sevilla man down the left side as illustrated with the image below, whereas Manquillo positioned himself closer to Can.

As shown in the heat maps below, the majority of Moreno’s play on the night came in the Swansea half with less work done in the Liverpool end of the pitch:

But Alberto’s attacking intent was aided but Manquillo operating more conservatively, covering to the right of Can and thus allowing Sakho to shuffle across to close space when defending after Moreno had burst forward, illustrated as Javier had a more even split of work across both halves:

Was also interesting to see wide positions taken by full backs rather than midfielders. Thought Moreno and Manquillo looked comfortable

The performances of Alberto Moreno and Javier Manquillo in the wide left and right positions have shown Rodgers their ability to play the roles, and the pair should keep their shirts in the starting XI for the time being, while continuing to prove that they should be the first choice options for each respective position.