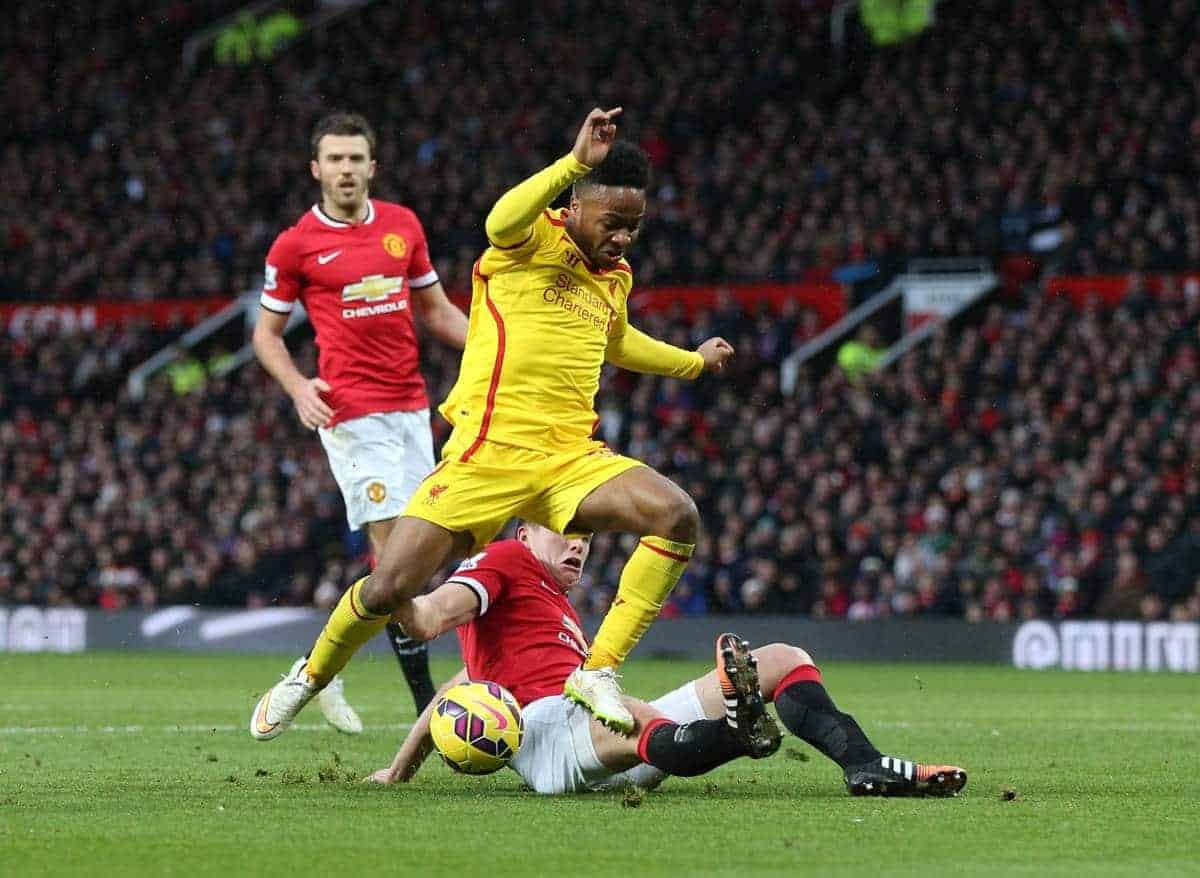 With Raheem Sterling struggling as a lone striker against Manchester United, Jack Lusby believes Brendan Rodgers made a mistake, despite his best intentions.

It was more of the same from Liverpool on Sunday, as a shocking defensive display and an on-goal profligacy saw Brendan Rodgers’ side pulverised in a 3-0 loss away to Manchester United.

What was more surprising was Rodgers’ team selection for the game.

A few of these selection surprises have been called for by factors of the Liverpool support throughout this season, and it was Rodgers’ utilising Sterling in a striking role that stood out as this encounter panned out.

Unfortunately, however, it proved to be the right idea with the wrong execution by Rodgers at Old Trafford.

Calls for Sterling to be used as a striker were initially sated in Liverpool’s 3-0 Champions League defeat to Real Madrid in October, and the 20-year-old looked lively in that encounter.

After that loss, Rodgers claimed this could be a plan for the future:

BR: I will consider using Raheem Sterling as a striker in the future. And Adam Lallana did well when he came on.

With United’s defence struggling for form and consistency amid a significant injury crisis, utilising Sterling as a forward, and tasking him with running at a shaky back line, was an inspired move by Rodgers.

Sterling did look effective in this sense, but was unfortunately let down by a worrying profligacy in front of goal.

With United goalkeeper David De Gea in fine form, Sterling was unable to find the back of the net, despite making the joint-most efforts on goal—with his five attempts matched only by United’s impressive Robin van Persie.

But was this all down to the 20-year-old?

Granted, Sterling’s finishing was poor, and his composure needs to be worked on, but his failure in front of goal was a composite creation to be placed within Rodgers’ tactical deficiency and Liverpool’s overall team disappointment.

Key to the creation of chances for Sterling in this fixture, and in Rodgers’ formation, was clearly the inclusion of Philippe Coutinho in an advanced playmaking role.

The No. 10, when at his creative best, is the prime candidate for an attacking line set up to feed off quick, incisive through-balls, and unsurprisingly the midfielder played the most of any player in this encounter with two.

BR: Coutinho is the brain in our team, the continuity player. He might not score many goals, but he's a wonderful reference for the team.

However, and it is telling in terms of Coutinho’s overall performance, neither of these were accurate.

Coutinho’s game was marred by consistently sloppy passing and an uncharacteristic lethargy—ignore whatever Gary Neville had to say about his failure to track Rooney for United’s opener, Coutinho is typically a diligent defender.

Coutinho a very convenient scape-goat here (via @GNev2). Weren't there two holding midfielders supposed to, ahem, hold behind him?

An overall passing accuracy of just 76.7 per cent represents a miserable performance from the Brazilian, who saw the most possession (6.8 per cent) of any player.

To put this into context, Sterling’s passing was accurate 88.5 per cent of the time on Sunday.

With a bullish Marouane Fellaini so effective as United’s holding midfielder, it was an unwise move for Rodgers to replace Liverpool’s other creative outlet in Lallana at half-time, and Coutinho continued to underperform in the second half.

When Coutinho is targeted, more often than not his creativity wilts.

Sterling struggled to convert chances mainly due to a lack of composure, as noted, but an inconsistent quality of service did not aid Liverpool’s cause.

Sterling running down attacking cul-de-sacs and chasing lost causes forced Rodgers’ hand at half-time, and the introduction of Mario Balotelli for the second half highlighted where his offensive game-plan was initially flawed.

While the £16 million summer buy was once again frustrating at times, with his arrogant long-range attempts and persistence when it comes to set-pieces, his introduction livened up the side.

#LFC substitution – Mario Balotelli replaces Adam Lallana for the second half, which has just kicked off at Old Trafford.

In turn, this diverted attention from Sterling, and the pair combined well in the second half—but this came too late for Rodgers.

Poor defending, and a miserable defensive selection, surely lost the game for Liverpool.

However, while utilising Sterling as a striker in lieu of the tired Rickie Lambert was the right move, suffocating him of service—with Coutinho off-form due to United’s midfield pressure—and of a strike partner saw him fail in front of goal.

Little consolation but Balotelli looked better today than he has in the last 10 or so after playing up top with someone. Surprise.

Balotelli showed glimpses of the striker that so impressed on his debut against Spurs, and using the No. 45 alongside Sterling’s movement from the start would have given United’s defence much more to think about.

Rodgers is clearly trying to shake things up at Liverpool, and in turn improve his side’s form, but doing things piecemeal—dropping Dejan Lovren one week, Mignolet the next—only hints at the solution.

Without Daniel Sturridge, Sterling is Liverpool’s most devastating attacking option, but he must be partnered up front.

Should Raheem Sterling be used as a lone striker again? Let us know in the comments below.