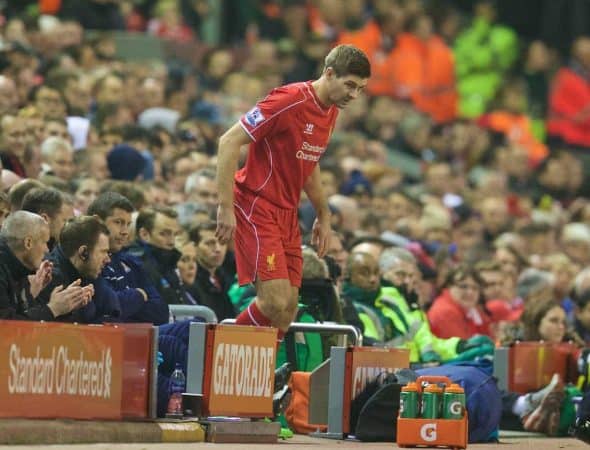 Steven Gerrard at 34: Comparing how Scholes, Giggs and Lampard were used at same age

With age a big factor in the new Steven Gerrard contract talks, Jack Lusby looks at how other midfielders prolonged their careers in the Premier League.

Brendan Rodgers confirmed on Monday that Gerrard had been offered a new deal, but reports suggest that a key aspect of the new deal will be about the captain’s playing time and role in the side.

This season so far the midfielder has played in all 13 of Liverpool’s Premier League games, and only once as a substitute, after being rested at the weekend against Stoke City.

Key to Steven Gerrard's decision on this #LFC contract will be how much he thinks he will play this/next season. Not straightforward

But as precedent shows, Gerrard should not be utilised this often.

Using the examples of Paul Scholes, Ryan Giggs and Frank Lampard, as three of the Premier League’s most distinguished and long-lasting midfielders, it is possible to reflect on how often Gerrard should be played at his age.

“I’ll take the Scholes of 2004-2010/11 as the very best. He’s similar to Xavi and Pirlo in his ability to control the tempo of a whole match. Winning games is not just about scoring the goals. People used to ask why Manchester United scored so many late goals, it was because they used to knacker teams out for 85 minutes.”

Much like Gerrard, Scholes relied on his passing prowess in his later years.

As a 34-year-old, in 2008/09, Scholes made 21 appearances in the Premier League, scoring two goals and making another two assists. Seven of these appearances came from the bench, and Scholes was subbed off six times.

Compared to Gerrard this season at the same age, has 12 league starts, whereas Scholes made only 14 in total in the respective campaign.

The following season, Scholes scored three goals and made four assists in 28 league games, four of these appearances were as a sub, with Scholes replaced on 11 occasions.

Gerrard has never been subbed by Rodgers this season.

Scholes played until he was 39 years old, and this is arguably a testament to Alex Ferguson’s management of his abilities and the endurance of his quality as a result.

Giggs is a prime example of a player wholly adapting his game to suit his physical capabilities.

Despite playing a fair amount of his latter games in his natural wide position, a switch into a reserved, central role alongside Michael Carrick undoubtedly prolonged his career.

In this role, Giggs described how “I was a quick player when I was younger, now I am not so quick. [You have to] use your experience, use your intelligence on the pitch, to adapt your game and change your game, as I have done.”

With a tailored training regime and a thorough, understanding manager in Ferguson, Giggs played until he was 40 years old.

At 34, in the 2007/08 season, Giggs managed to play 31 games in the Premier League, scoring three goals and making six assists, with five of these games as a substitute and a in further nine Giggs was withdrawn.

Perhaps the most obvious comparison comes between Gerrard and Lampard, with the two rising through the ranks of England as part of the same ‘Golden Generation’.

Lampard’s midfield talents were managed masterfully by Rafa Benitez and then Jose Mourinho as he saw out the end of his Chelsea tenure, and the now-36-year-old is still going strong on loan at Manchester City.

As a 34-year-old in the 2012/13 season, Lampard made 29 Premier League appearances, scoring 15 goals and making one assist. The midfielder was subbed on eight times, and off five times.

Now, at City, Lampard is benefitting from this approach and has scored three goals and made two assists in eight league appearances so far, having started just two of those games.

Scholes, Giggs, Lampard and Gerrard at 34:

Scholes, Giggs and Lampard at 35:

Clearly, Gerrard is being utilised more extensively so far this season than either Scholes, Giggs or Lampard were at his age, despite each of those players of great importance to their respective clubs also.

Based on average and barring injury or transfer movements, Gerrard is on course to feature in every Premier League game for the Reds this season, only three times as a substitute, to a total of 3204 minutes.

Rodgers may have recognised now, with his comments on Gerrard’s contract and resting the captain against Stoke City, that the midfielder needs careful management.

Gerrard should be playing between 20 and 30 games per season in the league to achieve his best form on a consistent basis.

These contract talks will likely be focussed mainly on playing time, but Rodgers must stress that, using examples such as Scholes, Giggs and Lampard, the focus must be on quality rather than quantity.

If he plays to his strengths, Steven Gerrard could prolong his career by at least another two or three years and write more memorable chapters in his Liverpool career.

How many games should Steven Gerrard play this season in the Premier League? Let us know in the comments below.