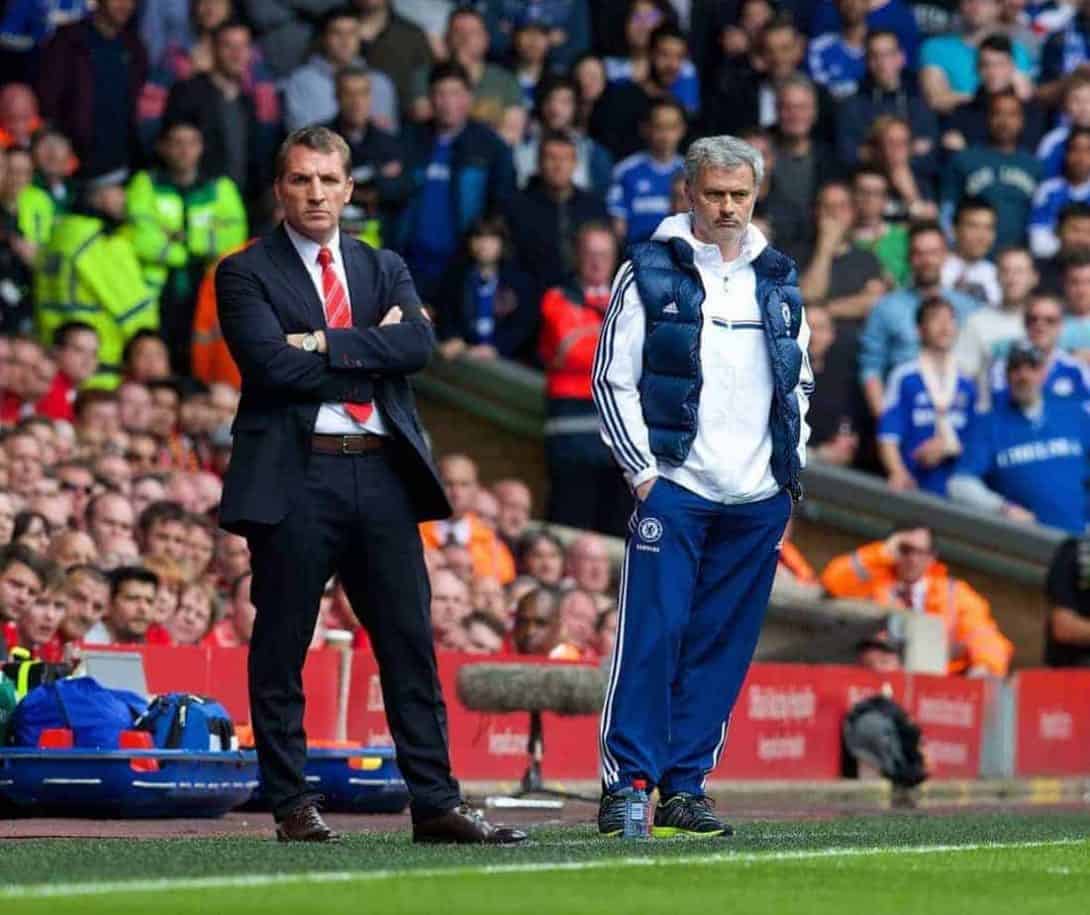 Liverpool manager Brendan Rodgers has faith his players can compete against Chelsea on the pitch irrespective of what gameplan Jose Mourinho employs.

In their last two visits to Anfield the Stamford Bridge boss has comfortably won the tactical battle and Rodgers has lost all three encounters against his former mentor since taking over on Merseyside.

However, he insists that will not have an effect ahead of Tuesday’s Capital One Cup semi-final first leg at home against the current Premier League leaders.

“I think a big part is down to the players. Once they cross the line it is about them and the confidence and the qualities they have,” said the Reds boss.

“He is a top-class manager, Jose Mourinho has proven that over the last decade or so. He has great experience but once the players cross the line for me I have a big trust in the group and they are working well at the moment.

“For us it is certainly not a threat, it is an opportunity to reach a final.”

Despite almost winning the league last season Rodgers, in his third season in charge, knows he will have to start delivering silverware soon as the club’s last trophy came in this competitions under Kenny Dalglish in 2012.

It would represent a significant hurdle overcome for the manager but he sees as even more important for his young squad. He was a youth team manager at Chelsea during Mourinho’s first spell in charge and Rodgers believes winning the League Cup, the Portuguese’s first trophy in England, provided a platform for a decade of success.

“Our objective is to win a trophy and qualify for the Champions League,” said the Reds boss. “I think winning a trophy would help our future here in what we are trying to build and trying to deliver. It will give the younger players a lot of experience.

“I joined Chelsea in 2004 and at that point in their history they were a club who wanted to win titles and trophies.

“They have maybe done it in a different way but over the last 10 years they have shown once you have won that first one you can hopefully go on and sustain it.

“The players back then, some of whom are still there now, will tell you the first one is the most important.

“We know it is going to be a challenge but we know if you want to win the competition you have to beat the best teams and at this moment in time Chelsea are the best in the country.”

Usually it has been Chelsea who have played things tight and capitalised on the counter-attack but ironically, Rodgers may find he has to rein in his side’s attacking intent in order to ensure they are not taken apart as easily as they were for Mourinho’s last two visits.

In a two-legged semi-final the last things he wants is for his side to have to go to Stamford Bridge next week and chase the game from the off.

“It is a different type of game, you don’t want to open up too much, but the tie is not won or lost in that first game so it is important we retain our confidence,” he said.

“You will have to deal with pressure at moments in the game but the most important thing coming out of this game is to make sure you are in a good position going into the second leg.

“The last six games they’ve won two, drawn two and lost two so we will look at it as an opportunity at home.

“But if we don’t win the game it is not all lost, we can still go to Stamford Bridge and win that’s for sure.”