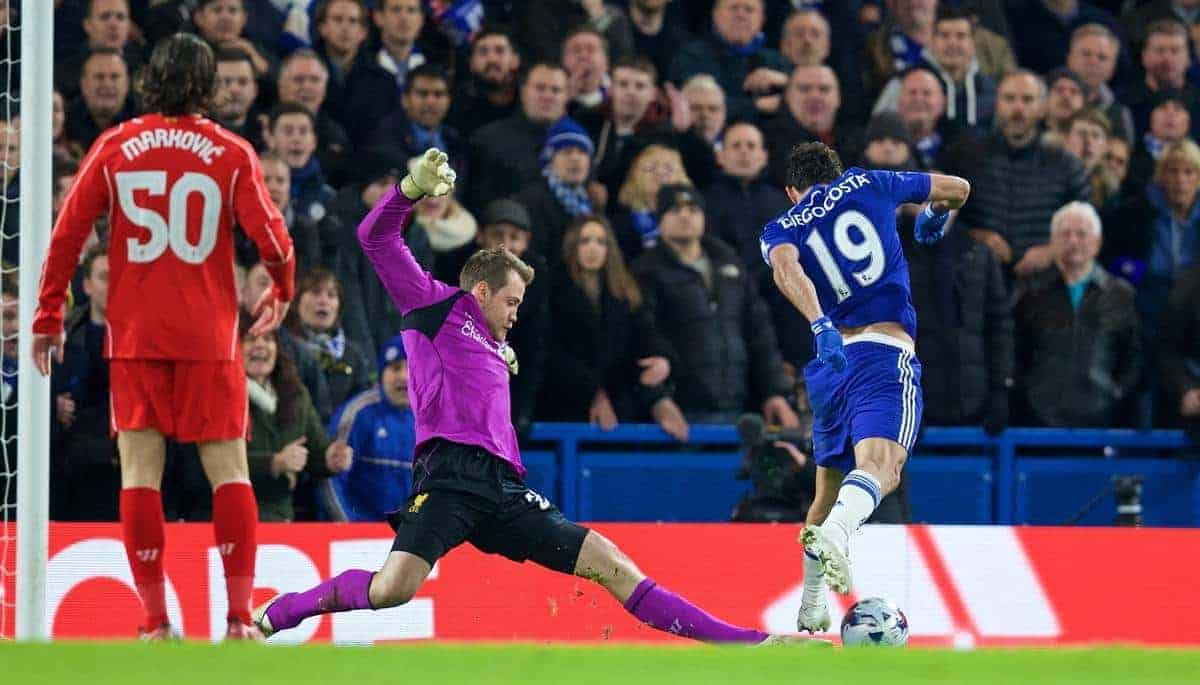 Liverpool succumbed to 1-0 defeat to Chelsea after extra-time in their League Cup semi-final showdown, and we assess each Reds player on the night.

The Belgian has taken plenty of flack this season, and rightly so, but he was fantastic all evening at Stamford Bridge.

His handling was first-class from start to finish, and he made two fabulous saves in the second-half, one of which was a Sami Hyypia-esque tackle. The 26-year-old may not be the long-term solution in goal, but his form is much improved.

Can looks like an enormous prospect for the future, and he continued to show his class against the Blues.

His defensive work was solid throughout, he used the ball intelligently and he generally dealt well with the imperious Eden Hazard cutting in from the left.

The Slovakian is another who has been much-maligned at times, but he was very impressive on the whole. He was locked in a battle with the relentless Diego Costa all evening, and more than held his own.

The 30-year-old is still the least assured of Liverpool’s central defenders, but anyone criticising his current form is simply judging him on past performances.

The Frenchman has been a colossus at the back for the Reds in recent weeks, but he wasn’t at his all-conquering best at Stamford Bridge.

The 24-year-old gave the ball away cheaply a few times, but aerially he was as strong as ever. The injury he picked up early in the second-half will be of huge concern to Brendan Rodgers and arguably proved a game changing moment.

The young Serb really struggled to get into the game during his 70 minutes on the pitch, and was his side’s least effective player.

He dealt with Hazard and Filipe Luis well in a defensive capacity, but he barely got the better of the latter in attacking areas at any point.

The 28-year-old produced yet another immense display in the middle of the park, as he continues his surprise second coming this season.

The Brazilian was brilliant in the tackle, used the ball thoughtfully and kept going until the final seconds when his body had virtually packed in. He has become a real fans favourite of late, and rightly so.

The vice-captain’s energy levels were unbelievable, even by his standards, and you could not fault his effort all evening.

The vice-captain wasn’t at his influential best though, and missed a wonderful chance to equalise with a header in extra-time. He defended admirably when switched to the right during the latter part of proceedings, especially as he was on a booking.

The Spaniard had a good game, particularly in the first-half. He made some excellent runs forward, one of which saw him almost give Liverpool a first-half lead, and he showed impressive physical strength against the brutish Ivanovic. He needs to be given more starts by Rodgers.

The skipper had an odd game in many ways. His usual strong points, such as set-pieces and shooting, were not at their best, but his defensive work was superb on the whole.

The 34-year-old was excellent in keeping Nemanja Matic relatively quiet in the opening 45 minutes, and produced a superb pass to Moreno, and he produced some vital blocks and interceptions as the game wore on. Looked shattered in extra-time.

The little magician has been in sublime form of late, and he continued to show just what an amazing talent he is against Jose Mourinho’s side.

His touch, vision and dribbling were a joy to watch, and although his decision-making was a little frustrating at times, he was the Reds’ greatest attacking threat. Again though, finishing let him down.

The 20-year-old suffered a frustrating night in many ways, but it was nothing to do with his own efforts. He was often isolated up front, and although he was always a threat, there was only so much he could do.

He produced one brilliant cross, and Henderson somehow failed to convert with a close-range header. His future belongs centrally behind the striker.

The 30-year-old did his job solidly, but the odd moment of stupidity remained. How bad must Dejan Lovren be if Johnson is coming on at centre-back before him?

The Italian produced a pretty shameful cameo in truth, and was a huge weak-link when he came on. His touch was generally poor, his effort levels were unacceptable and he was at least partially at fault for Chelsea‘s goal. Woeful.

The former Southampton man wasn’t involved for long enough, but his inexcusable decision to shoot from range in the final minute summed up his time at Anfield to date.