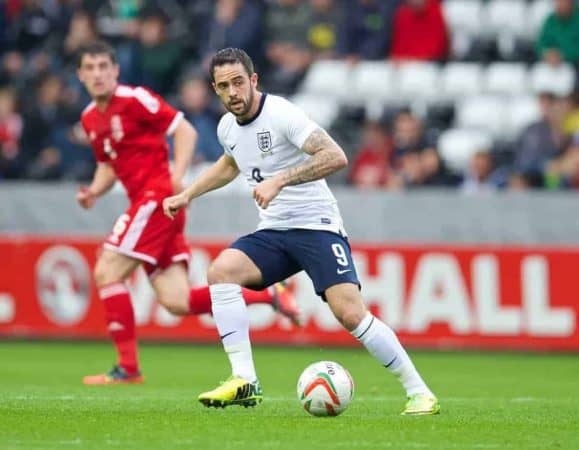 Liverpool are reportedly looking to sign Burnley striker Danny Ings this January, loaning him back to Burnley for the rest of the season.

Reports claim that Ings, whose contract expires at the end of the season, would be available for a compensation fee of around £3 million.

“Ings is out of contract this summer but Burnley don’t want to sell as they need him to spearhead their push for survival,” writes the Echo’s James Pearce. “As a result Liverpool are prepared to buy now but let him stay at Turf Moor until May.”

“There is plenty of competition for his signature with Tottenham and Real Sociedad among the list of clubs who have also registered an interest.”

But why should Brendan Rodgers look to pip the likes of Spurs and David Moyes’ Sociedad to the signing of Ings?

Here, we look at what Ings could bring Liverpool, what the striker would need to improve on, and why this deal would, overall, make sense.

Liverpool were linked with a move for Ings last summer too, with his partnership alongside Sam Vokes helping Burnley to one of the Championships coveted automatic promotion spots.

Signing successful Championship players should always be considered somewhat of a risk due to the gulf in class and demands in terms of playing styles between the Premier League and its lower tier.

Now 19 games into his maiden top-flight season however, Ings can be more seriously considered.

The main strength that Rodgers will be looking for Ings to bring to Liverpool is quite simply goals – with the 22-year-old primarily a poacher, able to finish with both feet and relatively strong in the air, too.

In 19 games so far this season, Ings has scored seven goals, a fair rate considering Burnley are fighting for relegation and the striker has struggled with injuries this term.

However, further to this, Ings is operating as primary centre-forward in a hard-working Burnley side, he is tasked with holding up play, creating for his teammates as well as defending from the front — all qualities that Rodgers has asked of of his strikers this season.

Ings has made a tackle per game on average so far this season, more than Daniel Sturridge, Rickie Lambert and Fabio Borini combined, and level with Mario Balotelli.

His rate of 1.1 key passes per game is again more than Sturridge, Lambert and Borini, as well as Balotelli.

This overall tenacity and guile has hallmarked Ings’ season so far, such as in a 2-1 November win over Stoke City, in which he scored both of the Clarets’ goals.

Furthermore, in manager Sean Dyche, Ings has a manager attuned to his merits and developments as a young English forward, as the 43-year-old recently attested:

“It seems to me that if a British player does something, the reaction is, ‘Oh yeah, decent,’ whereas when it is someone brought from other shores for a big fee it’s, ‘Look at that, isn’t it amazing?’”

At Burnley for the rest of the season Ings can be afforded the time and space to develop his talents under Dyche’s guidance.

Dyche and Rodgers are known to be friends and the Burnley boss can therefore provide the Liverpool boss with insight into the player’s temperament and character.

The main cons in terms of signing Ings come with the striker still representing somewhat of an unknown entity — with just half a season in the top flight to his name, just what can Ings produce in the long-term?

There are many questions along this line:

– Is the step up from Burnley to Liverpool too high?
– Can he replicate this season’s goalscoring with consistency?
– Will he be able to function in the lesser rotational role that he will likely take up at Liverpool?
– Does he have the tactical intelligence to suit Rodgers’ system at Liverpool?
– Can he truly become a player of Champions League quality?

Unfortunately, these are questions that cannot be answered at this juncture, but Liverpool have been stung by not taking a risk on these factors previously — take Adam Lallana’s inflated £25 million summer fee for example, after consistent performances in the Premier League.

To judge whether these cons are worth the risk, the context of this deal must be considered.

Context of the Deal

Signing another young striker, with a burgeoning yet not-yet-established reputation at a lower-level club, will likely cause considerable ire among sections of the Liverpool support that are still smarting from the relatively failed signings of Borini, Lambert and Balotelli.

This season so far Liverpool have been eagerly awaiting the return of Daniel Sturridge from injury, then everything will be alright, right?

That Rodgers has struggled to truly realise his sides potential without Sturridge suggests Liverpool need another top-class striker to compensate for the England man’s regular fitness issues.

But there is nothing to suggest that Ings is being signed as direct backup to Sturridge.

Ings, at a year younger than Borini, is a more regular goalscorer, a more creative lone striker and a more frequent contributor in the defensive sector, as seen with this season’s Premier League statistics below:

However, Ings’ higher rate of key passes and dribbles per game, as well as his higher number of total assists (three to Borini’s one) suggests he is a more adept lone striker, able to bring players into the game and hold up play with dribbles as well as finishing moves himself.

As a £3 million replacement for Borini, or Lambert for that matter, Ings is a no-brainer.

Allowing him to stay at Burnley for the rest of the season should not be considered a negative.

Ings can continue his development, unlike Divock Origi at Lille, in a thriving system and under a thorough, intelligent manager in Dyche.

A low-cost, low-risk, high-potential signing such as Danny Ings, while not the big name Liverpool fans may be expecting, should be appreciated at this point—Brendan Rodgers will surely aim higher in his attempts to replace Mario Balotelli in the summer.

Should Liverpool look to sign Danny Ings this January? Let us know in the comments below.