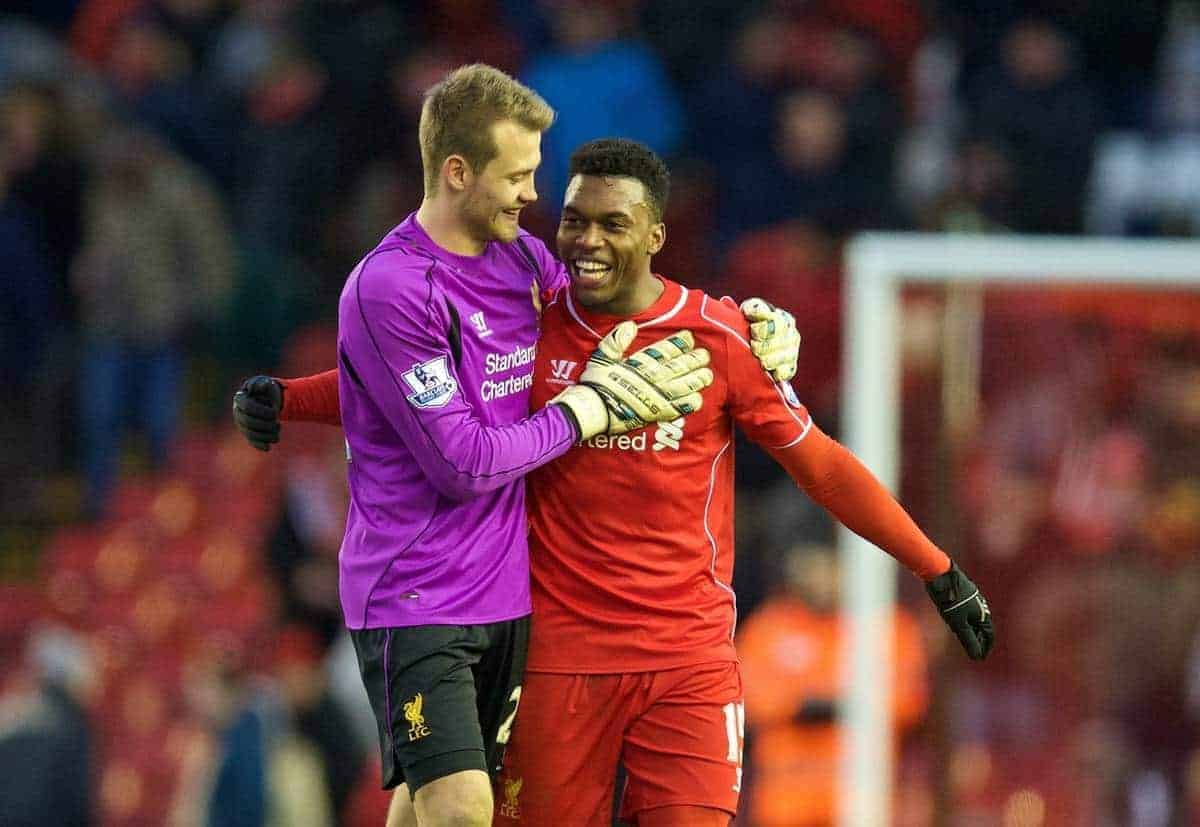 Liverpool brushed aside West Ham 2-0 at Anfield on Saturday, and we assess each Reds player on a victorious afternoon for Brendan Rodgers’ men.

The Belgian had a largely untroubled afternoon, but whenever he was called upon he was solid. There are signs that his form is improving, which he deserves great credit for after a tough time of things.

Collected crosses and corners comfortably on more than one occasion. Another cleansheet, huge for his confidence.

The imposing youngster continues to look a class act at the back for Liverpool, and his use of the ball and reading of the game was impressive all afternoon. He also dealt well with the physicality of former Red Andy Carroll.

Moved to centre of the three in the second half and looked assured.

The 30-year-old continued his good run of form. He handled the pace of Enner Valencia well on the whole, and generally looks far more steady in a back three.

Sakho was colossal from start to finish, and continues to show what a brilliant centre-back he is. He was excellent in all aspects of his defending, and is a hugely important player for Liverpool now.

Credit to for him playing through the pain barrier with his back injury. Played out of the back and was praised by Brendan Rodgers post-match.

The 20-year-old has enjoyed a terrific time of things in his wing-back role, but he was far from his best against the Hammers. His influence was minimal, and he missed a glorious chance to make it 1-0 just before half-time.

The Brazilian was not as noticeable and influential as he has been in recent weeks, but he was still quietly effective. He used the ball intelligently, and provided good defensive cover in front of the defence.

Like Lucas, Henderson wasn’t at his best, but he didn’t need to be. His passing was effective and his energy levels were as impressive as ever. Needs to improve his set pieces though.

The young Spaniard was a constant outlet on the left, making endless runs down the flank to support the attack. Defensively he was largely troubled, but was solid in that area nonetheless.

After a disappointing showing on his last Anfield outing against Bolton, Lallana was once again on the periphery of things. He is still far from his best though, and will come good.

The 22-year-old produced yet another virtuoso display, outlining why he is such a vital player for Liverpool now. He created both goals, and his assist for Raheem Sterling’s effort was a joy to watch. Man of the Match.

Sterling was a pest to West Ham all afternoon, and his link-up play with Coutinho was mesmerising at times. He took his goal expertly, and looked a class act from start to finish. Eight goals for the season for the 20-year-old now.

DANIEL STURRIDGE (on for Markovic 68)- 7

The 25-year-old has missed five months of action, but scored within 12 minutes of coming on. His return is enormous for the Reds; we finally have a finisher in the team again. Gave Liverpool a completely new edge in the final third, which is long overdue and hugely welcomed.

Produced one good shot to test Adrian, but wasn’t on the pitch long enough to assess properly. Good to see him back and adding another option in attack.