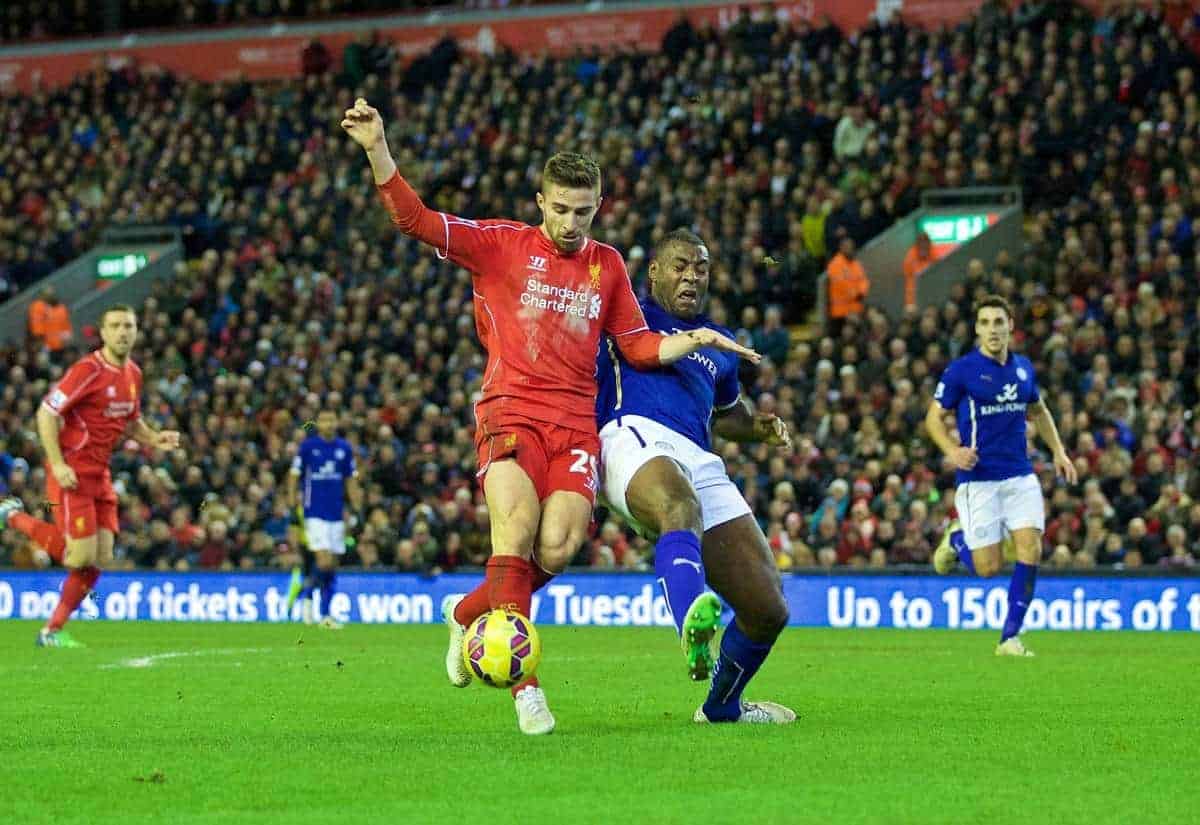 Liverpool started 2015 with a hugely frustrating 2-2 draw as they squandered a two goal lead against a battling Leicester City team. We assess each Reds player’s performance on the disappointing afternoon at Anfield.

Solid in most aspects of his game, Mignolet showed some good handling throughout from corners and crosses, and also better distribution than usual. The Belgium stopper couldn’t do anything about either of goals unfortunately.

The German didn’t defend with the same assured nature and composure displayed in his last two performances, and had a tough afternoon against Jeffrey Schlupp who proved a real handful. Look increasingly tired as the game went on.

Come into the side in place of Martin Skrtel, the experienced Ivorian didn’t enjoy the most comfortable afternoon reflected in a basic performance where he defended with little composure.

The imposing Frenchman put in another solid display on the left of the back three. Sakho was reliable in possession as ever for the vast majority of the match and made a couple of excellent challenges, including a goal saving one on Jamie Vardy.

Henderson struggled to impose himself on the match after being shoved out wide and didn’t enjoy anywhere near the amount of influence he does in the middle of park. Almost scored what would have been goal of the season with a well hit volley and worked tirelessly, but needs to be central as he’s wasted on the flank.

The captain has the two goals to his name as he was as reliable as ever from the spot, but Gerrard was anonymous in open play throughout. Restrictive in the middle with his inability to press, it was a far more disjointed play from the Reds with the 34-year-old back in the side.

Lucas struggled to get to grips with midfield with the lack of legs in the middle alongside him, and other than winning the ball well on a couple of occasions, he was largely bypassed throughout and picked up a booking for a trademark late clumsy challenge.

Lively up and down the left side Moreno didn’t enjoy the same success as last time out, but the Spaniard continues to form a good partnership down the left with Sakho, and he was a threat once again in the 85 minutes he played this afternoon.

Sakho to Moreno looking a good partnership down the left there. Sakho finds him well.

The Brazilian magician continued his recent great form as everything good that the Reds did going forward had Coutinho at the heart of it. He played two big parts in winning both penalties and it was almost like he was playing on his own at times. Comfortably Man of the match for Liverpool.

Coutinho is head and shoulders above anybody on the pitch for ability. Looks the one is who clearly a superior footballer to Leicester's XI.

Lallana was a huge disappointment after producing an excellent performance against Swansea on Monday night as the England man produced next to nothing during the 55 minutes he was on before being withdrawn through injury.

Produced some good movement ahead of Coutinho with the first penalty an obvious example but Sterling struggled again to have a genuine impact on the match as the amount of game time the 20-year-old has played looks to be catching up with him rapidly.

Coming on in place of Lallana, Borini did very little for the second half with his only contribution of note blazing a shot into the Kop. Wants opportunities to impress but failed to take it yet again today.

Like Borini, the Serbian struggled to have an impact after coming on with twenty minutes remaining but he did have a glorious chance to nick a later winner after being picked out by Sterling that he headed woefully wide.

Was entered to proceedings with time running out and the clock on 82 minutes, but Lambert had no impact on the game.