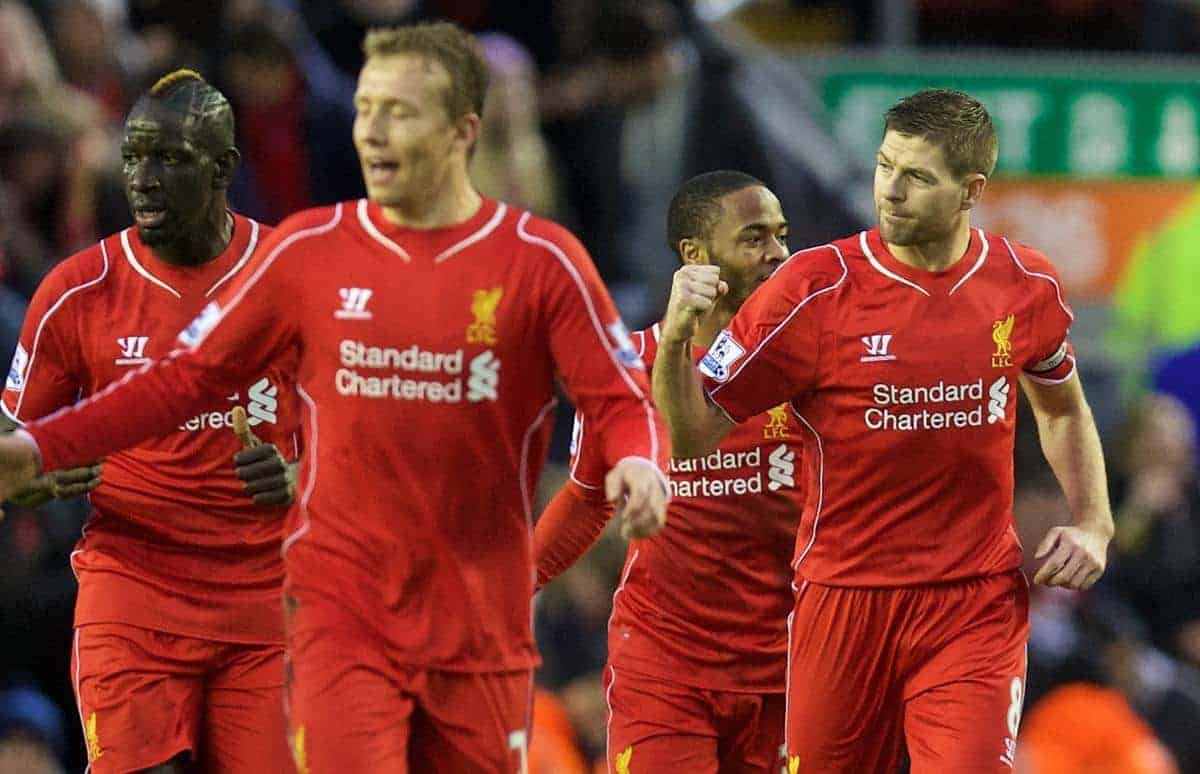 Brendan Rodgers made two alterations to the team that trounced Swansea City 4-1 on Monday night, as Liverpool looked to build on a good recent run of results.

Captain Steven Gerrard returned, with Jordan Henderson switching to right wing-back in place of Javier Manquillo, while Kolo Toure came in for the suspended Martin Skrtel.

The brilliant front three of Philippe Coutinho, Adam Lallana and Raheem Sterling all started again, while Emre Can was restored at centre-back. Three points were expected, but they were far from a given.

Leicester were almost ahead after just a minute, with Riyad Mahrez’s free-kick coming back off Simon Mignolet‘s post. It wasn’t far off being a similar goal to Fabio Aurelio’s terrific Champions League effort at Chelsea in 2009.

It was a really positive start by Nigel Pearson’s side, and an extremely sluggish one by the Reds. Mahrez had a glorious chance after 11 minutes, but curled the ball wide of the Kop goal. Jeffrey Schlupp also dragged an effort wide.

In the 16th minute, Liverpool were awarded a penalty after Wes Morgan was adjudged to have handled the ball. It was unbelievably harsh, and clearly hit the centre-back’s face. Gerrard stroked home the spot-kick, and Rodgers’ men were lucky to be ahead.

Schlupp shot wildly into the Kop soon after and Mahrez’s free-kick deflected over, and the Reds’ defence was being opened up an alarming amount.

Alberto Moreno almost got in after brilliant work from Coutinho, and Lallana fired a terrific effort just wide, but after half an hour it had been far from vintage Liverpool.

The hosts did start to boss proceedings, however, enjoying plenty of the ball, and a tired-looking Sterling dragged a shot wide of Ben Hamer’s goal eight minutes before half-time.

Shortly after, Liverpool were given another penalty after a clear handball by Danny Simpson. Gerrard scored with ease again, becoming his side’s top scorer this season in the process. His rather muted celebration was evident though.

Henderson almost scored a stunning volley from 25 yards, but it just missed the target. It was the final act of note in the first-half, and the Reds were in total command despite being far from their fluent best.

There were no changes at the interval.

Moreno almost made it 3-0 seconds after the restart, but missed the target, while Sterling was played in by Coutinho but was in an offside position. Matty James fired into the Anfield Road end for the visitors, who continued to look fairly threatening.

Fabio Borini replaced the injured Lallana after 55 minutes, with Sterling dropping into a deeper role to accommodate the Italian forward.

Three minutes later it was 2-1, and you couldn’t deny that Leicester didn’t deserve it. Substitute David Nugent’s superb effort reduced the arrears.

Unbelievably, Schlupp then made it 2-2 with a well-taken effort. The scores were level, and the visitors had been all over Liverpool since half-time. They needed to improve drastically in the final 30 minutes.

Lucas Leiva tested Hamer from range, as the Reds enjoyed a slightly better spell, while at the other end Mahrez curled wide from a dangerous free-kick.

It was arguably Leicester who looked the more likely to go on and win the game, and Mamadou Sakho made a fine block to deny the lively Nugent.

Borini shot over from close-range when he should really have done better, and another effort from him was then inadvertently blocked by substitute Lazar Markovic.

Coutinho’s shot into Hamer’s arms, and with 10 minutes remaining two costly points were slipping away from Rodgers’ side. Sterling shot tamely at the Foxes goalkeeper.

Marcin Wasilewski’s shot was blocked and Mahrez shot well wide, while Rickie Lambert on for Moreno with six minutes left. Henderson was then denied expertly by Hamer.

Borini appealed for a penalty in the dying minutes, but to no avail, and Markovic headed a glorious opportunity wide.

That was that in terms of chances, and Liverpool had to accept that they had dropped two potentially huge points in their quest for a top-four finish. Leicester had been the better side throughout, and were fully deserving of a point.