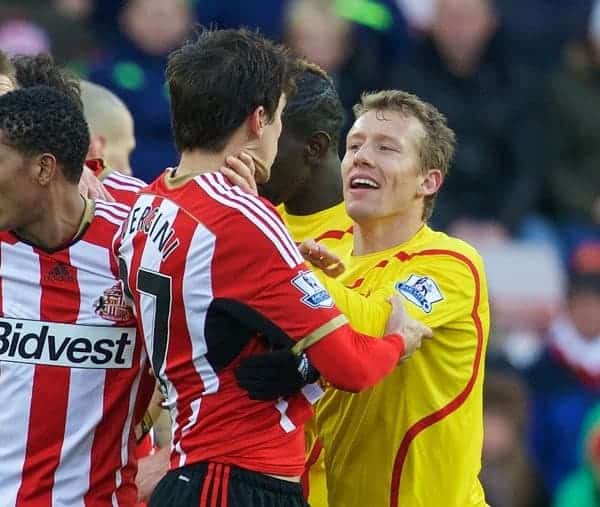 There was much praise for Lucas Leiva and less so for Dejan Lovren from Liverpool fans after the Reds overcame Sunderland 1-0 at the Stadium of Light on Saturday lunchtime.

Lazar Markovic bundled the ball past Costel Pantilimon in the ninth minute, which proved to be the winner despite a number of spurned chances by the visitors.

It was certainly an improved performance from Liverpool — who were forced to reshuffle at half-time as Steven Gerrard left the pitch with a hamstring problem.

Lucas bossed Liverpool’s midfield, controlling the pace of the game with organised passing in midfield. Amid speculation that he will move to Inter Milan this month, the Brazilian would be sorely missed at Anfield right now.

The Reds had to overcome difficult windy conditions to hold on for the win, but Simon Mignolet will be glad for the clean sheet.

Couple of photos at full-time with Mignolet, Balotelli and Henderson thanking traveling fans for support pic.twitter.com/hpKxEUJmZS

Fabio Borini struggled to provide the quality Liverpool need up front with Raheem Sterling rested. The Italian made lots of runs, but ineffectively.

Liverpool fans have taken to Twitter and the This Is Anfield Liverpool FC Forums to celebrate and discuss the match, which leave Brendan Rodgers’ side eighth in the Premier League table after 21 games.

The Reds now go to Aston Villa next Saturday looking for three points to further close the gap on the top four.

Here we round up some of the best reactions from fans. Let us know your post-match thoughts in the comments section below.

Credit to Sunderland fans joining Liverpool fans in standing up for the 96. #SAFC #LFC pic.twitter.com/pYLcTRsK8R

Lucas also had one of his best performances in a while. Would still happily bin him to Inter for someone better though.

Lucas Leiva is f*cking boss. Shame he’s going to be boss for Inter, but that’s BR for you! Lazar MOTM, trying to see why we bought Lovren… nope, no idea!

Three points and a clean sheet on the road for @LFC! Great to see such appreciation by the players for the traveling Kop

If some backbone was shown against Leiciester at home. Liverpool would have 4 PL wins in 4.

Herb in the forums:

Man for man I think that was probably one of our top 3 performances of the season, shame we didn’t get the goals to show that but apart from one 25 yard strike from them it was absolutely dominant. They were god awful mind, afforded Coutinho far too much space and let him run the game.

ok so…made it trickier for ourselves with performance dropping off, but thought we defended well and never really in trouble.

If Markovic continues to 'bulk up' he'll be some player! Front 3 of Lazar, Sturridge, Sterling with Coutinho behind is potentially great.

A back three turns into a back five for most teams. You need players like Can, Markovic, Moreno and Henderson to pull it off. Players that are top quality on the attack, and can move in and out of different roles and positions and still have the defensive ability when you have to dig it out.