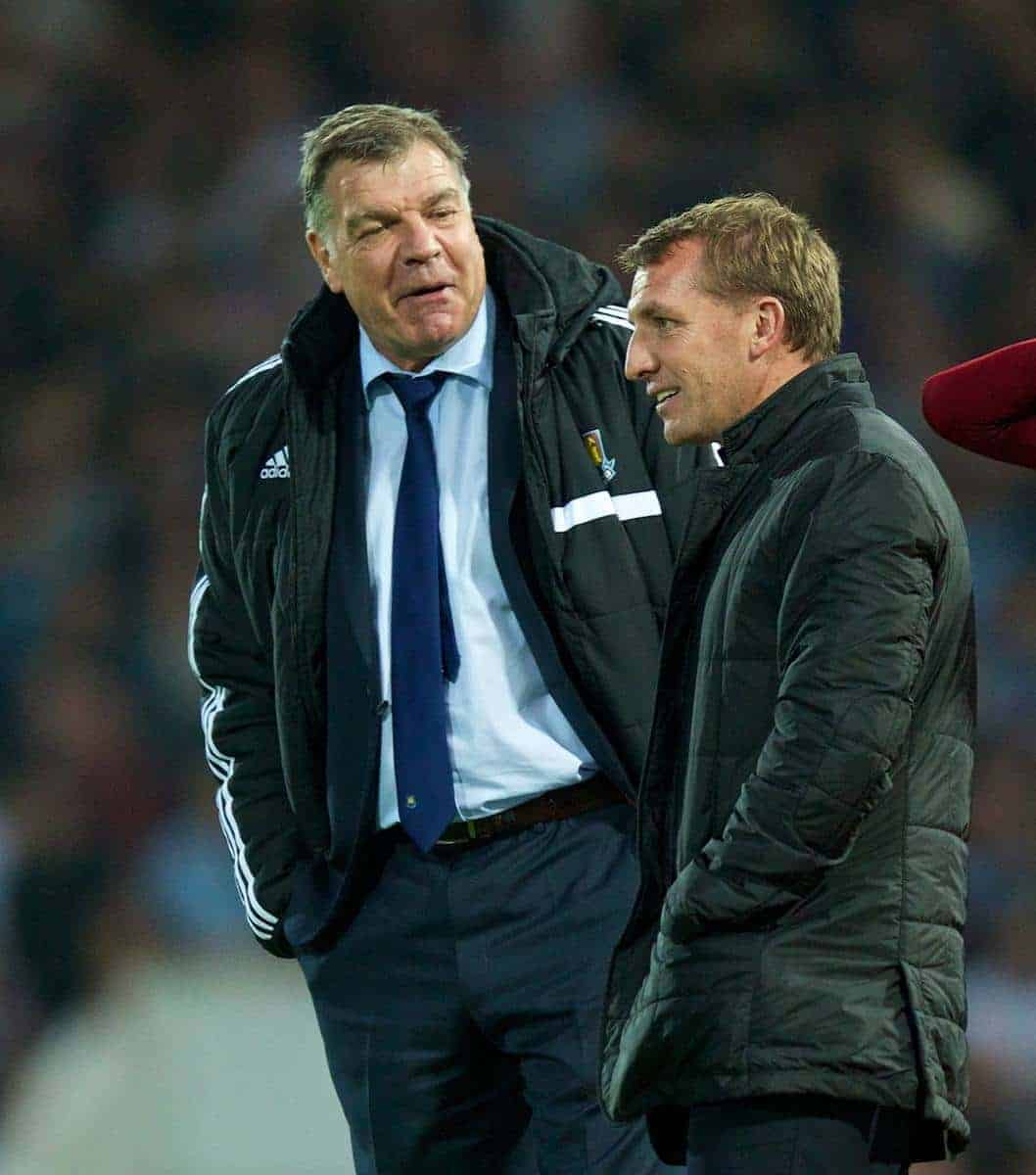 After three games in a busy week of cup action, Liverpool return to the Premier League on Saturday as they face 7th placed West Ham looking to avenge a 3-1 defeat earlier in the season. Ben Twelves takes a look at the team selection options ahead of the clash. Brendan Rodgers’ Liverpool turn their attentions back to their quest of mounting a challenge for the Champions League places, when they take on West Ham in another vital league fixture at Anfield on Saturday afternoon.

The Reds will have to move quickly to put Tuesday night’s League Cup disappointment behind them – where they tasted defeat for the first time in 16 games – and though the result’s from the two-legged affair far from tell the whole story, Rodgers’ men now face a test of character in how they respond to the cup exit.

A strong and spirited reaction will certainly be the requirement of the day from the Liverpool manager who will be keen to show his squad have genuinely turned a corner after the set-back, but Rodgers’ side will have to improve on their recent record at Anfield of four draws in the last five games in all competitions if they want to leapfrog their opponents and close the gap on fourth place once more.

There’s little time for rest and reflection as the games come thick and fast for Rodgers and his squad, and with a relentless month of weekend and midweek fixtures coming up, the Liverpool boss faces a tough juggling act to keep his team as fresh as possible.

Rodgers: "Daniel not playing has had a huge impact on our season. He has looked outstanding in training. He looks in top class condition."

Tuesday’s second leg came too early for Daniel Sturridge though the England striker will be hoping extra training time has enabled him to be included for the first time since August this weekend, and after injury to Mamadou Sakho saw him withdrawn early in midweek and miss training on Thursday, the dominant Frenchman is hopeful of recovering in time to feature.

Mamadou Sakho missed training today but the Frenchman expects to return tomorrow and be fit for Saturday's clash with West Ham. #LFC

Sakho is set to be assessed ahead of the match, and should he fail to recover fully, his absence opens a place for either Glen Johnson or Dejan Lovren to come into the side meaning Rodgers could have to decide between the lesser of two evils, and more changes could be forthcoming after a physically draining 120 minutes for those that played at Stamford Bridge.

Steven Gerrard, Jordan Henderson and the excellent Lucas Leiva were three who completed the whole game, as did key defensive and attacking players Martin Skrtel, Emre Can, Philippe Coutinho and Raheem Sterling and with that in mind, Rodgers could opt to make more changes to his team with options aplenty.

Adam Lallana – who was an unused substitute on the night – is surely set to come into the starting line-up and Javier Manquillo, Jose Enrique, Joe Allen, and Jordon Ibe – who has featured once since being recalled, against Aston Villa – are all options to provide energy to a tired midfield should Rodgers decide to make numerous changes with three games in a week looming.

Fabio Borini was harshly left out of match-day involvement in midweek as Rickie Lambert and Mario Balotelli took up the striking places on the bench and the Italian – who made and scored one in two successive starts when played – will be hopeful of being recalled to the squad.

If Sakho is fit, Rodgers should maintain consistency with the solid back three of Can, Skrtel and the Frenchman, though a change should happen higher up the pitch where Lallana should enter in the side for Gerrard for obvious reasons. If Liverpool’s best central defender isn’t fit enough to take part, a return to the team for Lovren should materialise with the Croatian naturally a left sided centre back and a more physical option against Sam Allardyce’s side, but Rodgers could also add more fresh legs to his team elsewhere.

The demanding schedule ahead and Tuesday’s tough encounter could see Alberto Moreno or Markovic make way with Enrique, Johnson or Jordon Ibe – who is cup tied for the replay with Bolton next week – all options to come into midfield, and with Lallana replacing the captain in the attack, the Reds boss could name a team with alteration which would see Liverpool look like this come 3pm Saturday afternoon: Rodgers: "If we get a positive result on Saturday that'll put us in a great position (to challenge for the top four).

If Liverpool are to continue battling their way into top four contention, the Reds will need to record three straight league wins for the first time this season, and with the chance to reduce the deficit to just two points should result fall in favour, what better time to make that happen.