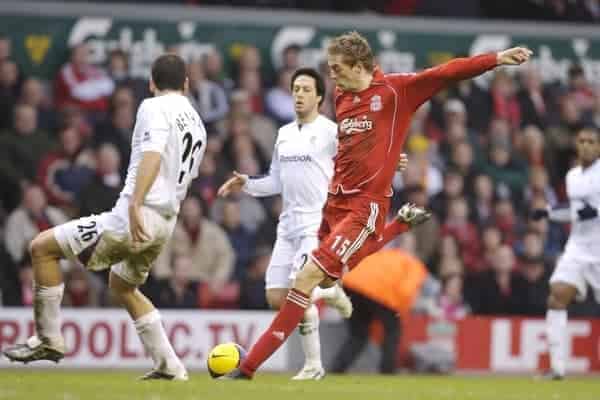 The Welsh international has pulled his hamstring again and faces three weeks out, so Heskey should be at the fulcrum of Wanderers’ attack on his old stomping ground.

Midfielder Lee Chung-yong has a hairline fracture of his leg which boss Neil Lennon described as “minuscule” and will only miss one-to-two weeks.

Zach Clough (hamstring) may feature for the first time since his impressive debut in the last round but Joe Mason has returned to Cardiff and Marc Tierney (ankle), Mark Davies and Max Clayton (both knee) remain absent.

Boss Lennon is happy to place Bolton’s FA Cup prospects in the hands of a couple of golden oldies this weekend as Heskey and Eidur Gudjohnsen head to Anfield aiming to turn back the clock.

Injury-hit Wanderers will meet Rodgers’ Liverpool on Merseyside and bid to reach the fifth round of the FA Cup, a competition Heskey won with the red half of Merseyside in 2001.

Both he and former Chelsea striker Gudjohnsen, who at 36 is one year Heskey’s junior, were in the prime of their careers as two of English football’s most potent forwards during the first half of the previous decade.

And while recapturing that form may be beyond the two elder statesmen now, Lennon had no reservations about signing a duo with 140 international caps between them back in December as he stated the case for his two senior strikers.

“There is this myth once you hit 30; it’s absolute rubbish,” he stressed. “I’ve played against (Paolo) Maldini, (Alessandro) Costacurta, (Paul) Scholes, Xavi – all in their mid-30s.

“Xavi, when he was 32, 33, was still one of the best players in the world by a considerable distance.

“Some managers go that way, some don’t. I don’t. I just see the ability and what they can offer and I know the motivation of the players which I think is very important.

“I’m at a different level from these top managers obviously at the minute but there’s no doubt that Emile and Eidur have certainly made us better.”