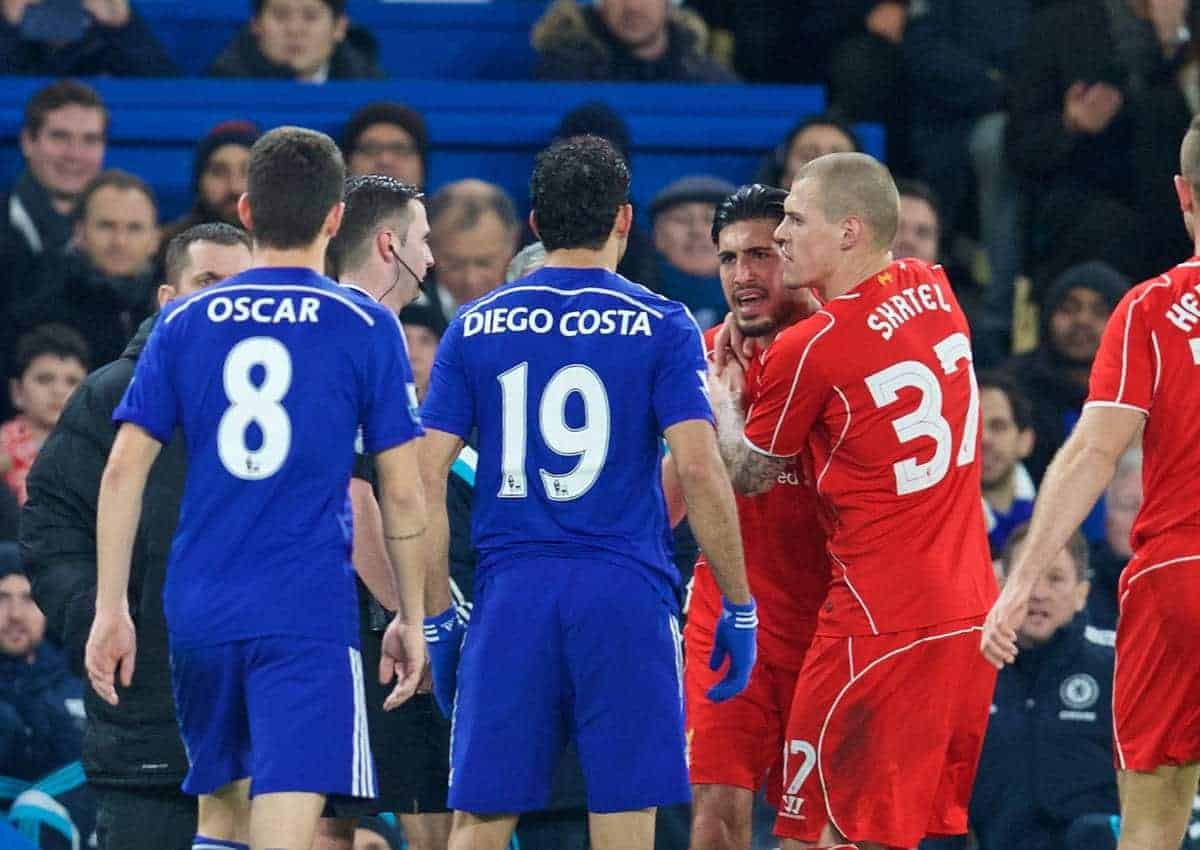 Mourinho delusion continues as he claims Costa stamp was “accidental”

Read the post match thoughts of Brendan Rodgers and Jose Mourinho after the League Cup semi-final.

A Branislav Ivanovic header in the fourth minute of extra-time edged a frenetic, ill-tempered clash with Liverpool 1-0 as the Blues advanced to the March 1 final 2-1 on aggregate. Diego Costa was involved in three of the game’s main talking points – stamps on Emre Can and Martin Skrtel – and a Chelsea penalty appeal when tripped by Skrtel.

Jose Mourinho railed against Costa’s critics, one unnamed television pundit in particular, who is understood to be former Liverpool midfielder Jamie Redknapp.

“I don’t know what you understand by stamp,” Mourinho said. “I think maybe you are already influenced by… I’m going to use a word which put me in trouble but I think this time I cannot be punished to say that there is a campaign on the television with a certain pundit that is saying Diego Costa ‘crimes’. This guy must be nuts.

“I saw the incidents. About the penalty, I don’t speak. I prefer not to speak. If I comment I will be in trouble and I don’t want to be.

“What you call stamps and Sky calls crimes, I have to say absolutely accidental. He goes to the ball, he chases the ball, as the opponent is on the floor, they have a contact, he puts his foot there when he’s looking to the ball.

“Great campaign. We know how much that pundit loves Chelsea and particularly loves me.

“When you are there and you are paid and you are very well paid – much more than some managers that have to put their ass, every 90 minutes, every weekend on the bench.

Mourinho declined to name names, adding: “Forget it. Let’s go to Wembley. Come on. I don’t know his name, because when I see him I switch off the television.”

Costa could face retrospective punishment from the Football Association for the stamps, particularly the one on Can which came in front of the dugouts.

Liverpool boss Brendan Rodgers said: “He’s an outstanding player, an outstanding footballer. He has this edge to him. With Emre Can, that was poor, I felt. He could easily hurdle over the young player and he directs his studs right on to his ankle, which could’ve been nasty.

“And again the one with Martin Skrtel. There’s no need to do it. That’s the sad thing of it. “He’s a top-class player and he’s clever enough that the officials don’t see it.

“It was poor from him. He doesn’t need to do it. It wasn’t good for the game.

“The referee didn’t see it. When you see it afterwards, it’s disappointing.”

Tempers frayed in the technical areas as Mourinho and Rodgers confronted each other.

Rodgers, who thought Chelsea goalkeeper Thibaut Courtois was the difference in the tie, played down the incident but Mourinho hinted at animosity towards his former protege.

Rodgers said: “There’s no problem. It’s a competitive game, it’s a big game. Two top sides, so the ‘chimp’ comes out every now and then,” he added, alluding to the club’s link with sports psychiatrist Professor Steve Peters and his ‘inner chimp’ method.

Mourinho, who saw Courtois save well from Alberto Moreno and Philippe Coutinho in the first half, added: “We are very different people.

“He worked in Chelsea in my time for a few years. I don’t know if he learned something with me or not. Maybe he did, maybe he didn’t.

“Different profiles. He is what he is. He is a fantastic manager, but we are different people.”

Mourinho added: “Yes. I missed the goal. I was saying that Lucas and (Jordan) Henderson should be off with two yellow cards.”