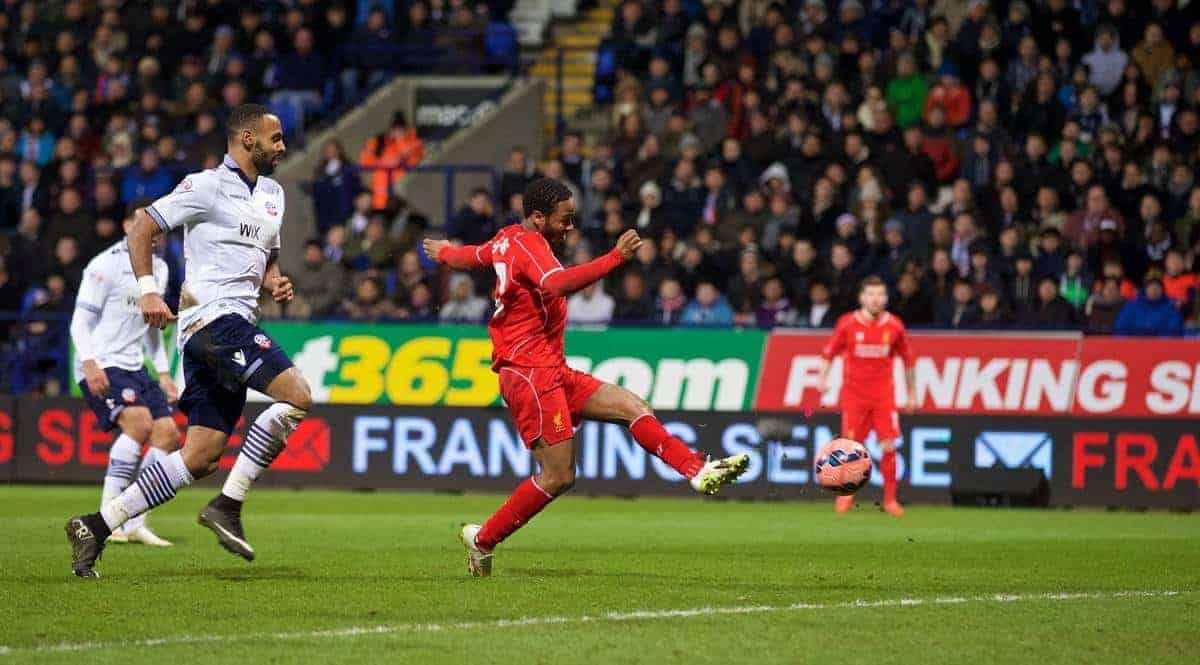 Brendan Rodgers’ Reds left it late to come from behind to progress to the fifth round of the FA Cup at the Macron Stadium – Ben Twelves picks a number of discussion topics from the last gasp win.

Liverpool breathed a huge sigh of relief at the final whistle against Neil Lennon’s side after two excellent finishes in the last five minutes of the match snatched a dramatic victory.

The Reds were largely dominant throughout the game in Lancashire, but after falling behind to a soft penalty converted by Eidur Gudjohnson, Liverpool were left with a mountain to climb while staring an embarrassing cup exit in the face. Neil Danns’ red card for the resilient home side who held firm until five minutes from the end swung the match even more in Liverpool’s favour, and with the dreaded extra-time looming and almost every attacking option at the club on the pitch, Sterling’s superb volley and Coutinho’s arrowed strike completed an unlikely but delightful turnaround.

It was far from the straightforward exercise hoped would transpire ahead of Saturday’s trip to Goodison Park, but it was job done for Rodgers’ persistent Reds, and here are the discussion points from the cup clash.

A strong team was named by Rodgers and despite the result it was a dangerous decision ahead of important upcoming fixtures.

Starting all first choice options bar Henderson and Lucas, Rodgers’ choice to not utilise the squad depth available to him ahead of a hectic schedule and more pressing matters was frustrating, and prioritising competitions and XI’s is something the Liverpool boss must begin to do with Champions League football the main concern.

Certain changes can be forthcoming immediately – such as the reintroduction of Henderson and Lucas to the XI – but the selection of all first choice picks in the back three, front three, and especially at wing-back – was unnecessary and should have been avoided.

It’s commendable of Rodgers to name almost a full strength team, but the decision could still yet come back to haunt the Liverpool boss over the next games.

Emre Can shines on the night

The German powerhouse continued his impressive from with an outstanding performance at the where he showed his class, versatility and what a player Rodgers has on his hands.

Can – who made the most tackles of any Liverpool player on the night – started on the right of the back three but for the second game running, Rodgers switched the 21-year-old and Skrtel at half time, allowing Emre to play as the central and ball playing defender in the back line.

Coutinho was brilliant at times but thought Emre Can, in all three roles tonight, was magnificent. Best player by a mile.

It proved a clever move from the boss as Can brought a production that doesn’t occur with the Slovakian – including embarking on the second highest amount of dribbles (3) behind Coutinho as he brought the ball out to start attacks from deep – before he then moved into midfield as Liverpool chased the game.

It was the move to his natural position where he utilised his qualities best, and providing the leading force for the Reds, Can dictated play expertly  – epitomised by a delightfully weighted scoop to set Sterling up for the equaliser – only after a fantastic piece of foot work and strike saw the German smash the cross bar.

If it wasn’t already evident, Can showed what a future he has in front of him alongside proving that the £10million paid in the summer was an absolute bargain sum.

Recommencing their partnership for the first time since the 3-0 defeat at Old Trafford back in December, Gerrard and Allen struggled in their roles in the Liverpool midfield again.

Proving that their combination in the team simply can’t work, Liverpool suffered from the pairing’s lack of control – with only four tackles and two interceptions made between them – and Lucas Leiva’s ball recovery as well as Jordan Henderson’s energy were badly missed on the night.

The Welshman was largely anonymous and failed to knit play together in a disjointed performance before being substituted after 69 minutes, and Gerrard on his landmark 700th appearence, failed to have any impact on the match as well as abandoning defensive duties on occasions – leaving the usually protected back three more exposed than in recent fixtures.

Against stronger opposition, the lack of midfield presence could have proved costly and it is essential Rodgers avoids playing the two together again.

The Brazilian’s well-documented revitalisation since Rodgers’ formation switch was displayed for all to see as the match-winner put in another quality performance.

Liverpool’s brightest and most creative figure, Coutinho’s fine form continued, but if there’s one criticism of the technically gifted midfielder, it’s with his frustratingly wayward shooting and lack of contribution in goals for a player of his extreme class.

The £8million bargain had a couple of efforts from distance though struggled to find his range, but he saved the best until last where after skipping inside substitute Liam Trotter, he rifled a shot towards goal which crashed in off the underside of the bar with the aid of a slight deflection from the Bolton midfielder.

He's still only 22, but Coutinho is already becoming the player we all knew he would and it's breathtaking to watch.

It was perfect timing from the Brazilian who continues to grow at Anfield, and celebrated his new contract with a cracker.

Adam Lallana’s form a cause for concern

Lallana endured another miserable match in the Reds attack and the £22million signing’s form has now become a real issue for Rodgers.

Been a very poor month-and-a-half for Adam Lallana.

Since producing his best performance in a red shirt against Swansea in December, the 26-year-old has failed to build on that and his poor displays since then persisted on Wednesday night, with the former Southampton man again adding nothing to the Liverpool attack alongside the game changers, Coutinho and Sterling.

The England man was a passenger – slow, lethargic, surrendered possession a number of times – and he looked completely out of sync with his attacking teammates who carried him before he was replaced after just 54 minutes by Henderson – who went on to record more passes, only one less key pass and grab an assist in less time.

Rodgers has some work ahead of him to properly integrate the summer signing into the team.

The games continue to come thick and fast for Rodgers and his squad, and the Reds have little time to rest ahead of Saturday afternoon’s derby at Goodison Park, before welcoming Tottenham to Anfield for vital back-to-back Premier League fixtures.