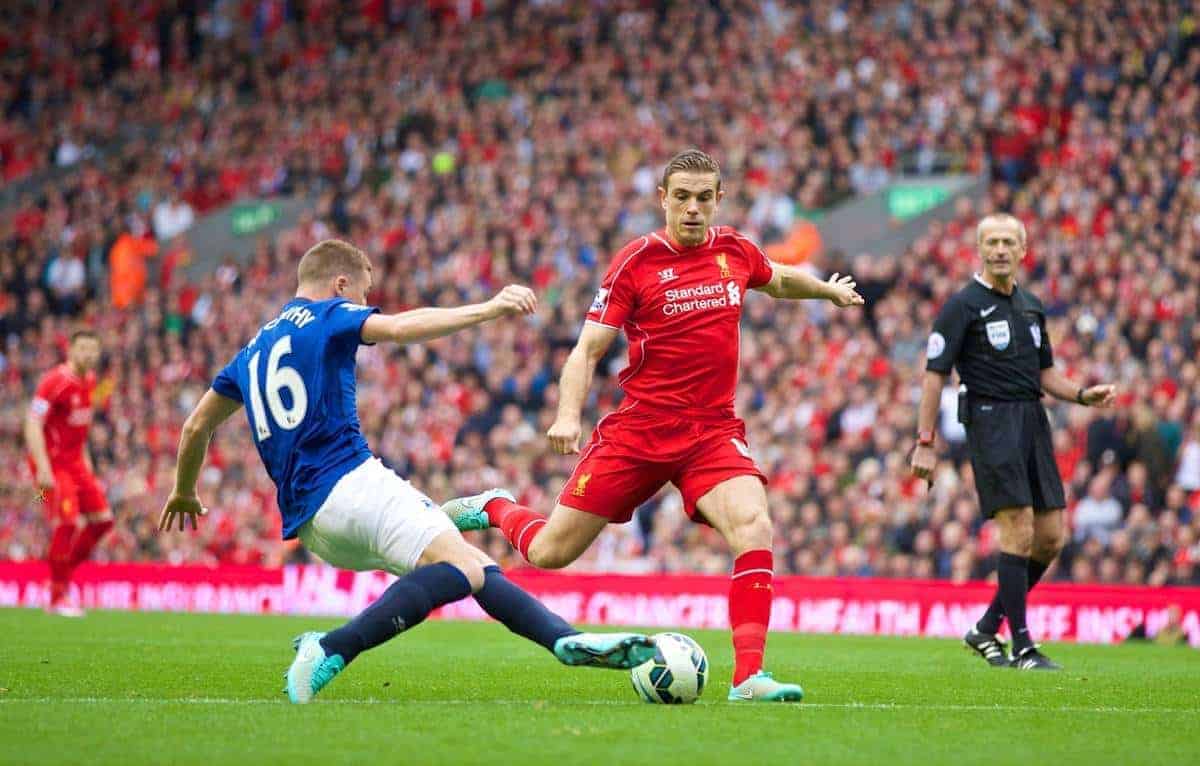 Brendan Rodgers’ Liverpool take on their nearest and dearest on Saturday as they travel to Goodison Park for the second derby of the season. Ben Twelves takes a look at the possible team selection ahead of the rival clash.

Liverpool make the short trip across Stanley Park to neighbours Everton on Saturday as the Reds return to the Premier League looking to continue their pursuit of an increasingly realistic top four challenge.

Rodgers’ side are now just four points behind 4th placed Southampton and five behind 3rd placed Man United and Liverpool arrive at Goodison Park full of confidence following three straight league wins, and having only tasted defeat once in their last 18 matches – a stark contrast to the Blues who have won just twice in their last 14 games in all competitions.

The Reds’ revival has been excellent to watch – with the team now boasting grit and determination alongside the re-established free-flowing football – and Rodgers deserves credit for the way he has altered his side, transforming performances and results which have been far more in tune with the Rodgers teams seen since his arrival in the Anfield hot-seat.

Rodgers: "I've been involved in a few of these games over past two and a half years. They go so fast, they're full of emotion."

As witnessed time and again with the frenetic derby clashes though, form often goes out with window as the old saying goes, and the Reds can’t afford to rest on their laurels for the grudge match with a big task still ahead, and with the fixture being the second of three in a week, the Liverpool manager has decisions to make.

Rodgers: "Sometimes form can go out of the window in derbies. But we're going into it in a real good moment." #LFC

It was surprising that the Liverpool boss chose against making more changes to his team in midweek with the derby looming, and while it remains to be seen whether the lack of rotation becomes a contributing factor over the next games, the Reds face the possibility of heading to Goodison without first choice right wing-back Lazar Markovic, who picked up a needless injury on Wednesday night and will be assessed.

Dejan Lovren, Mario Balotelli and worryingly, Lucas Leiva missed the cup win due to injury – as confirmed by Rodgers in his pre-match press conference – and the three will be monitored along with Adam Lallana who also limped off at the Macron Stadium, but good news is that Daniel Sturridge could be in line for his first start after two comeback substitute appearances.

Rodgers says #LFC will "analyse" over next couple of days before deciding whether Daniel Sturridge starts v Everton.

A number of the consistently picked first XI, who could have done with a break, now face the demanding prospect of back-to-back 90 minutes in the frantic derby, and having named an almost full strength team in midweek, alterations are likely to be few and far between.

Jordan Henderson and Lucas Leiva both received rests of sorts as Joe Allen and Steven Gerrard made up an uninspiring partnership in midfield, and the pair – should the Brazilian recover in time – are likely to come straight back in to the team, though a big question comes in the Liverpool’s attack.

Lallana endured another poor night in the FA Cup win alongside match-winners Coutinho and Sterling, and his ineffectiveness could result in Gerrard replacing the 26-year-old – if injury doesn’t already dictate – in the Reds attacking midfield two.

Rodgers is facing an anxious wait over the availability of certain individuals, but projecting that the Reds boss receives some welcome news, he should make just two changes to the side that started in midweek – adding some much needed fresh legs.

The disappointing duo of Allen and Lallana should make way for Henderson and Lucas, allowing Steven Gerrard to play his last Merseyside derby in the front three with Coutinho and Sterling, keeping Sturridge fresh in reserve for if or when needed. Those injury dependent changes should see Liverpool line up like so come kick-off time: Of course, those being waited on could fail to recover in time with doubts over the fitness of Markovic, Lucas, and Lallana, and if the worst comes to the worst and they are unavailable, Rodgers would be forced into one more change.

The Captain and vice-captain should make up the midfield duo with Allen not warranting a starting place currently, but an interesting decision could come at right wing-back where only Glen Johnson’s experience could see him picked ahead of the exciting Jordon Ibe and with Gerrard deeper, a place opens up in the front three for Sturridge to make his first start since August. Rodgers on reaching 100th PL game in charge of LFC: "There hasn't been a dull week but I've enjoyed every minute of it. I love my life here.

Having recorded three straight league wins for the first time this season last weekend, there’s no better time for the Reds to extend that run to four than on Saturday evening, and should Liverpool return to Anfield with maximum points from the rival clash, it could be the perfect big-game confidence boost ahead of tough upcoming games in the top four chase and opening of an important Europa League campaign.