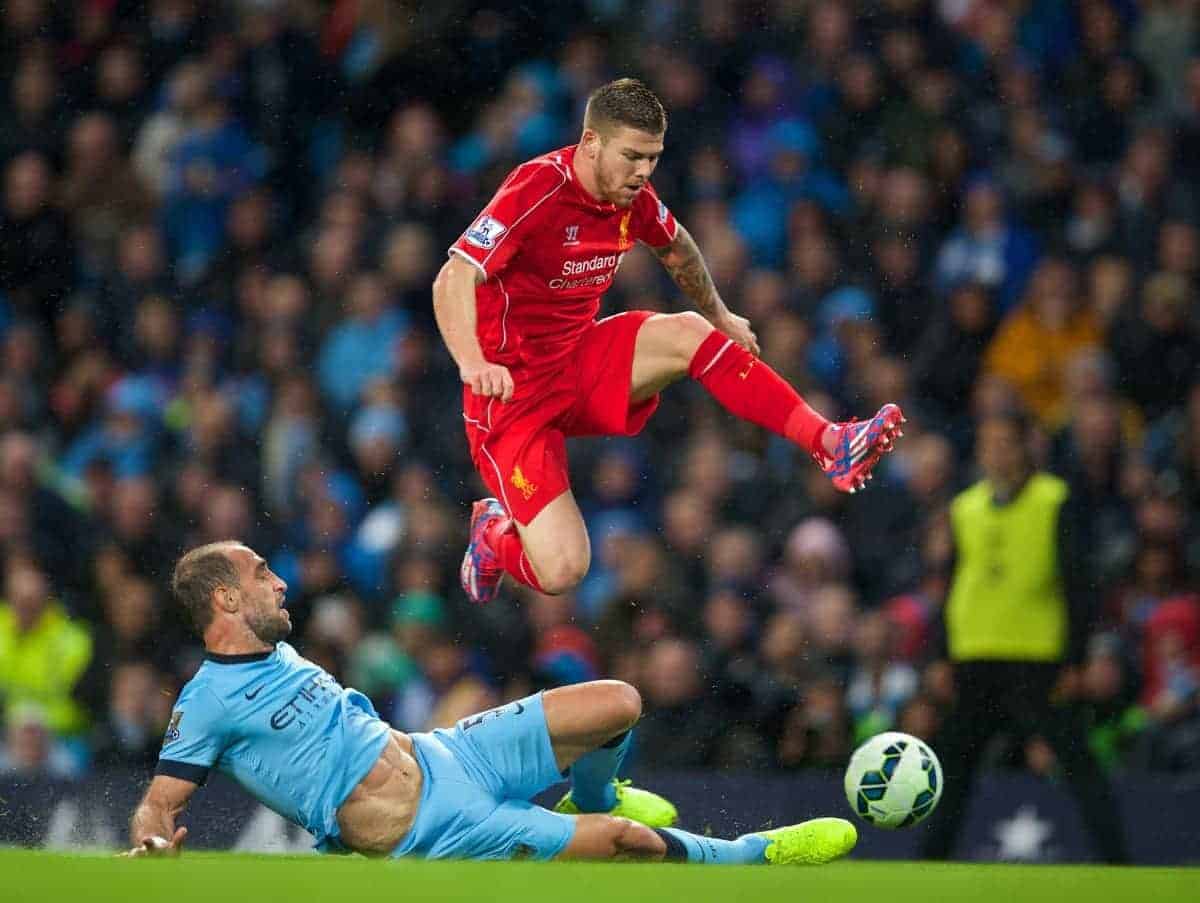 Before Liverpool welcome Manchester City to Anfield on Sunday, Jack Lusby puts together a combined XI of the two sides based on current form.

Liverpool welcome Manchester City to Anfield on Sunday off the back of a disappointing Europa League exit at the hands of Besiktas and they will need to put that loss behind them in an all-important Premier League clash.

City are clear favourites for the tie, given Liverpool’s Thursday night exploits and the title-chasers could put a dent in Brendan Rodgers’ top-four hopes with a win.

But which side edges the other in terms of individual output?

Here’s our Liverpool-Manchester City Combined XI based on current form, in a 4-2-3-1 formation. It’s been a remarkable turnaround for Simon Mignolet, but the No. 22 is now one of the best goalkeepers in the Premier League on current form, and is hot on the heels of Southampton’s Fraser Forster for the Golden Glove clean-sheets award.

Rodgers may have taken cues from Manuel Pellegrini’s management of Joe Hart last season, with the City boss dropping Hart for an extended period to address his form.

Hart has endured in goal for the Citizens since that episode, but has never truly impressed despite his reputation.

Neither matches the all-round prowess and consistency of City right-back Pablo Zabaleta however, and the 30-year-old is rightly and regularly considered the league’s best.

No Liverpool or City defender averages more tackles per game than Zabaleta’s 3.8.

For the right-sided centre-back slot, both Emre Can and Martin Skrtel could provide credible arguments for inclusion on their current form, with both excelling in Rodgers’ back three.

The starting spot in this XI, however, goes to City’s veteran centre-back Martin Demichelis, who has become the Citizens’ best defender this season.

His vast experience makes him an intelligent reader of the game, and his average of 2.2 interceptions per game is more than any other Liverpool or City centre-back.

Whenever end-of-year or best defender lists are collated, City’s Vincent Kompany is usually considered in the top five in world football, but there is no hiding from the fact he is a shell of the defender his reputation suggests he is.

With a penchant for the high-profile error, and a diabolical defensive perception, Kompany is becoming a liability for Pellegrini.

A more stable, consistent and in-form left centre-back is Mamadou Sakho, who has gone from strength to strength since coming back into Rodgers side.

The meandering performances and form of Gael Clichy and Aleksandr Kolarov make left-back City’s weak spot, and one which they could well look to strengthen in the summer.

Conversely, on Merseyside, since the introduction of the 3-4-2-1 Liverpool’s £18 million left-back signing Alberto Moreno has excelled, particularly with the system’s emphasis on his attacking talent.

In recent games however, such as the disappointing loss to Besiktas, Moreno has proved an adept defensive full-back, too.

Central midfield is a difficult one to recruit for in this combined on-form XI, as none of Liverpool or City’s regular starters in this role have truly impressed recently.

Starting off the partnership in this XI, however, is Liverpool captain-in-waiting Jordan Henderson, who has risen to the demands of the armband in Steven Gerrard’s absence, and his creativity from deep has proven invaluable of late.

Partnering Henderson in this line-up is City’s utility man, and Liverpool target, James Milner, who has been in excellent form for the Citizens recently, with two goals and an assist in his last five games, but in different positions.

Milner’s versatility and consistency would make him an ideal solution to this dearth of in-form central midfielders between the two sides, and would complement Henderson perfectly.

Kicking off this XI’s three-pronged attacking midfield is chief Reds playmaker Philippe Coutinho who, despite a tiring run recently, has contributed significantly to Liverpool’s upturn in form of late.

After star turns against the likes of Chelsea and West Ham United, Coutinho did visibly fatigue, but still managed to produce a world-class finish to kick off the recent 2-0 win away to Southampton.

No Liverpool player makes more through balls on average per game than Coutinho (0.4), and only one City player tops his output.

That man is, unsurprisingly, David Silva: the No. 10 that Coutinho should look to emulate in the Premier League.

Silva is arguably the best creative midfielder in Europe on form, and is at peak-performance at present, with three goals and two assists in his last five games.

The 29-year-old is City’s second-highest goalscorer in the league this season, with nine goals.

Completing the attacking midfield trident is City’s Samir Nasri, who is quite unfairly underrated by many when considering the Premier League’s best players.

Nasri is a versatile attacking option with an uncanny ability to glide through defences when he wants to switch it on and, on current form, is likely to be one of City’s main threats on Sunday.

No player, from either Liverpool or City, has made more key passes on average per game this season than Nasri (2.6).

With Daniel Sturridge, Mario Balotelli, Raheem Sterling, Edin Dzeko, Stevan Jovetic, Wilfried Bony and Sergio Aguero all vying for one spot in this combined XI, any manager would be spoiled for choice.

On form, and arguably overall ability, City’s Aguero is a no-brainer in this selection.

Aguero has scored four goals and two assists in his last five games for City—when compared to Sturridge’s one goal-one assist output in his last five, Aguero’s supreme form is abundant.

Who would make your Liverpool-Manchester City combined XI based on current form? Let us know in the comments below.