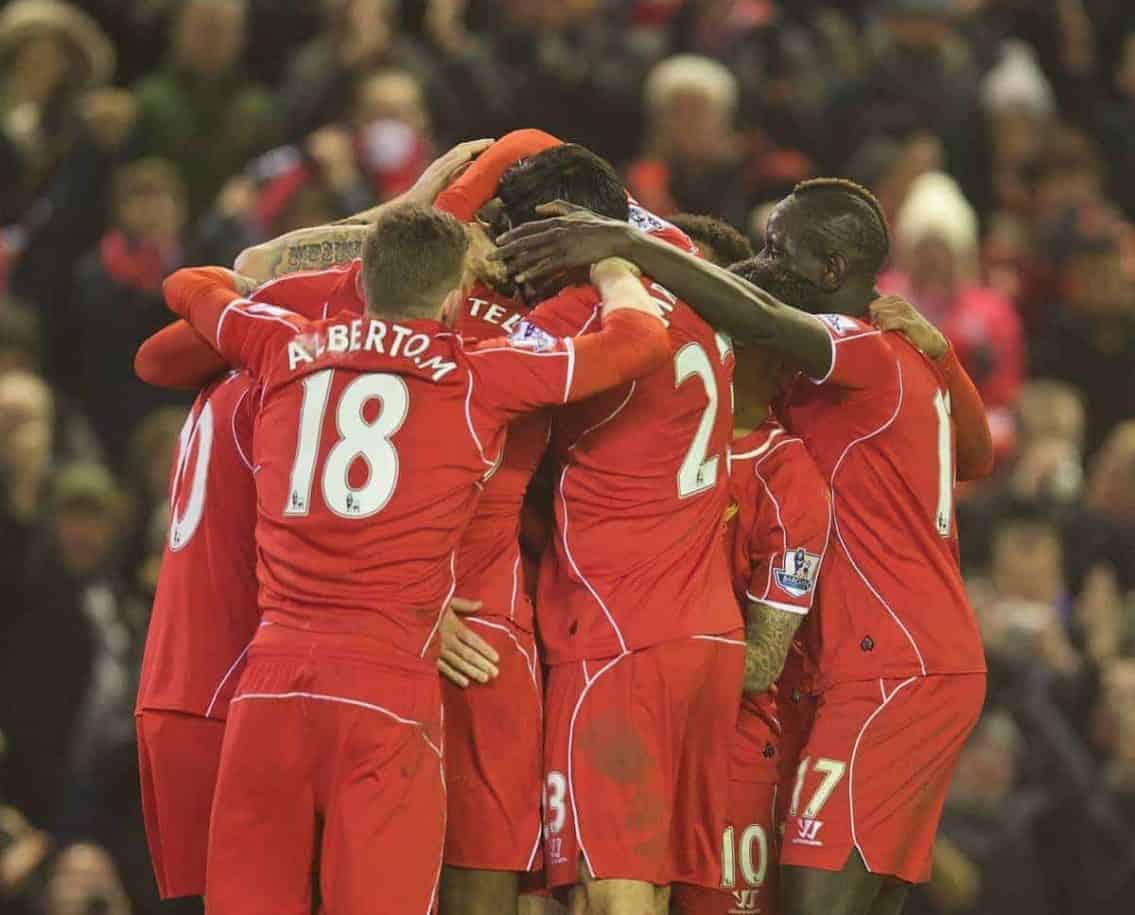 After a disappointing Merseyside derby on Saturday, both in terms of entertainment and the result, this game was terrific from start to finish. It was two attack-minded sides going at full throttle, and it made for a great spectacle.

A draw would have been another dent in Liverpool’s hopes of finishing in the Premier League top four this season, and while the odds are still stacked against them in comparison to Southampton, Manchester United and Arsenal, it’s far from an impossible task now.

Next up for Brendan Rodgers’ side is the always tricky trip to Crystal Palace on Saturday, in the FA Cup fifth round, before hosting Besiktas in the Europa League next Thursday. Southampton await next in the league, a week on Sunday.

Here are five talking points from the victory over Mauricio Pochettino’s men.

Lucas’ return to the side in recent months has been a huge catalyst in Liverpool’s resurgence in form- the only game they have lost inside 90 minutes since December was when the Brazilian didn’t start- and he was missed greatly against Spurs.

The 28-year-old was out through injury, and will be for a few weeks, and the Reds looked so much more susceptible without him bossing the midfield battle.

Liverpool have lost 8 of their 12 games without Lucas Leiva this season. Big loss. pic.twitter.com/GRa3vWUBAv

The visitors’ attacking trio of Christian Eriksen, Moussa Dembele and Erik Lamela had a field day at finding gaps in behind Gerrard and Jordan Henderson time and time again, and it outlined just how big a loss Lucas could be in the coming weeks.

He may not be the most mobile, but his defensive reading of the game from midfield is easily the best in Rodgers’ squad, and he brings an air of calm and simplicity to the team.

Lucas may not be perfect in all aspects of his game, and it may be that Rodgers brings in a younger, better defensive midfielder in the summer, but Tuesday showed how indispensable he is right now.

Steven Gerrard is holding his beloved Reds back

Much has been made of Gerrard’s summer exit to LA Galaxy, but while his sheer presence and marketability at the club will be an enormous loss, he will no longer be missed on the pitch.

The 34-year-old is increasingly becoming something of a burden, and at times you feel as though he is holding back Rodgers’ young side, and playing a completely different game from those around him.

After a fairly non-existent showing against Everton in the derby, Gerrard was moved into a deeper midfield role alongside Henderson, to make up for the loss of Lucas. It didn’t work, unsurprisingly.

Steven Gerrard completed just 71% of his passes tonight vs. Spurs.

The skipper offered no pressing and dynamism, as stated here in Jack Lusby’s player ratings, and Spurs’ aforementioned attacking midfielders had great success finding gaps in and around him.

Emre Can‘s switch to midfield after Gerrard went off gave the Reds far more impetus, although the legendary Englishman does deserve credit for dispatching his penalty with consummate ease.

What Gerrard has done for the club is second to none, and he is still a very fine footballer in his own right, but if Rodgers and his team are to make real progress, the captain must feature less and less in the lead-up to his exit.

Henderson has made giant strides since his dark early days at Anfield, becoming a key man and likely next captain. That said, his form has taken a slightly worrying dip in recent weeks.

The 24-year-old is not doing anything particularly wrong, and is still showing Mo Farah-esque levels of running and bags of heart, but he is also lacking a spark.

His lung-busting attacking bursts through the middle of the park have been in short supply, his passing has been more tentative on the whole and he has also been a little wasteful in possession.

Henderson being in turgid form of late & playing bad here makes the obvious Gerrard problem even bigger which is a HUGE problem. #LFC

For Tottenham‘s first goal, the Liverpool vice-captain was hugely to blame. He let Lamela run off him far too easily, allowing him to find Kane, who did the rest. If that had been Gerrard making that error, he would have been crucified for it.

It’s important not to go overboard about Henderson’s form, given the fact he and Lucas have done so well together in midfield in general, but he is definitely not firing on all cylinders right now.

Emre Can shines yet again

Having been Liverpool’s standout player against Everton, in an otherwise dull affair, Can was once again the Reds’ star men.

Can really is looking like a colossal footballer, and his potential is vast. He defended resolutely throughout, especially given the midfield’s lack of support at times, and brought the ball out from the back with class and drive at every opportunity.

When Gerrard was replaced by Dejan Lovren in the second-half, the 21-year-old was moved into midfield, where he was equally excellent.

Emre Can gets the MOTM award.

His pace, power, quality on the ball and all-round influence had echoes of Gerrard at that age, and he added a huge amount in that area. One barnstorming run, in which he was eventually upended by the hapless Kyle Walker, epitomised how unstoppable he can be.

It gives Rodgers the headache of whether to play the Germany Under-21 star in midfield sooner rather than later, given the fact he is starting to look wasted in defence.

Can is becoming one of the first names on Rodgers’ team-sheet these days, and has an enormous future ahead of him. There is a definite argument to say he should be a candidate for the post-Gerrard captaincy.

Balotelli should be second-choice striker

There wouldn’t have been many inside Anfield on Tuesday who truly felt Balotelli would be the hero on the night, but the 24-year-old delivered the goods at long last.

Although the Italian has been a complete waste of space at times since joining last summer, and is far from the long-term solution, he should be Liverpool’s second-choice striker behind Daniel Sturridge.

For all his frustrating ways, whether it be his lack of work-rate, selfish attitude or unpredictability, he remains a level up from Fabio Borini and Rickie Lambert. This is not saying a huge amount about them, in all honesty.

The former Manchester City man showed good movement and a poacher’s instinct for his goal, and while it was hardly a Goal of the Season contender, it could be a huge boost to him to get his first Premier League for the club.

The chances of Balotelli coming good remain highly unlikely, but the bottom line is he has more skill, pace and overall threat than Borini and Lambert, and should continue being given cameo opportunities like last night.

There is a potentially world-class footballer hidden somewhere inside the eccentric Italian; it’s just a shame nobody will ever fully see it.

Let us know your talking points from the game in the comments below.