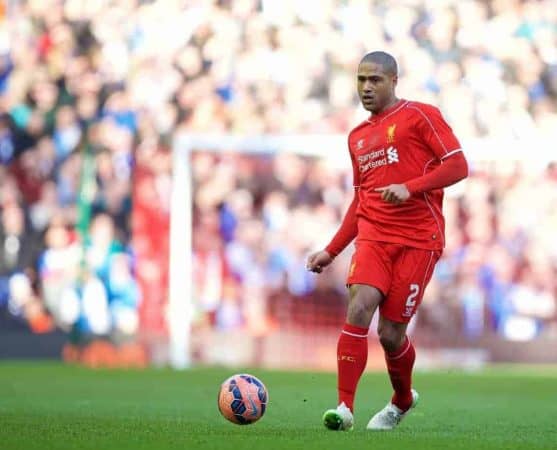 Glen Johnson looking for move to ‘turn around his career,’ claims agent

Johnson looks set to leave Liverpool at the end of the season on the expiry of his current deal with the club.

The 30-year-old is one of many players who could leave the club this summer, with Liverpool manager Brendan Rodgers presiding over another squad overhaul ahead of next season.

Barnett, speaking to Roma Press, confirmed that Johnson was looking to move on.

“That’s the most important thing for him. Where he can play nicely under a good club that’s challenging for things. That is where he wants to be.”

Johnson has been marginalised under Rodgers this season due to injuries and a disappointing drop in form, and has made just 14 Premier League appearances, scoring one goal.

Barnett claims that there “isn’t a timeframe” yet for which the defender will make a decision on his future.

Asked about Johnson’s likelihood of joining A.S. Roma, Barnett denied any contact with the Serie A side at this juncture.

“There hasn’t been any [contact] at the moment, no. I can’t really say if he is considering Roma, we’ve had no contact with Roma.

“Although, Roma would be a lovely place for him—Ashley Cole absolutely adores it there, I represent him as well. Ashley thinks very highly of Rome but we’ve had no contact with Roma regarding Glen.”

Former Chelsea defender Cole moved to Roma in a similar free transfer deal last summer, and has made 14 appearances for i Giallorossi.

If Johnson did choose to move to Roma this summer, he would find a kindred spirit in his former England teammate.