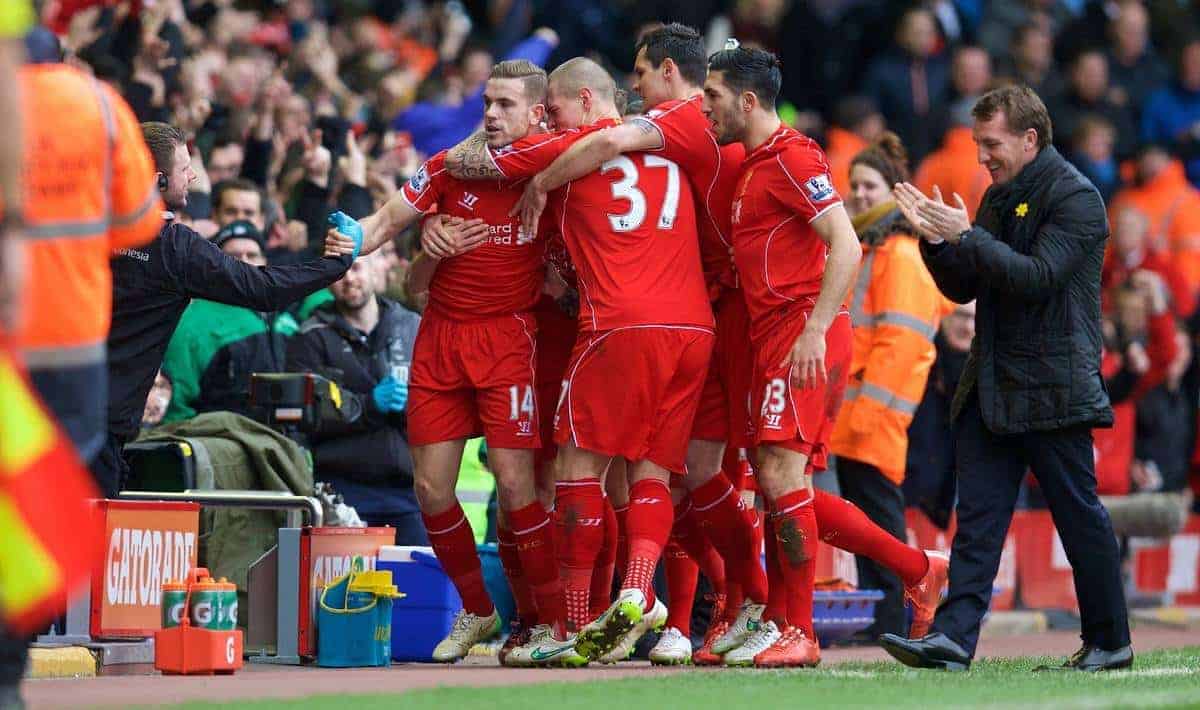 Liverpool took another big step towards a top-four finish in this season’s Premier League with a massive 2-1 win over title hopefuls Manchester City at Anfield on Sunday.

Whether it was the right decision or not, Dejan Lovren’s crucial penalty miss in the midweek loss at the hands of Besiktas was a significant blow to Liverpool and the confidence of a defender who has looked shaky at best for the majority of this season.

With Mamadou Sakho still injured for Sunday’s clash, Lovren continued his role at left centre-back at Anfield and, despite a poor first few touches, the £20 million man grew into the game.

At the heart of proceedings, Lovren made 72 touches of the ball, the same amount as Coutinho and just two less than Henderson, and was able in possession when required.

Facing up to Sergio Aguero—arguably the league’s best centre-forward—running the channels, Lovren coped well, winning five of his six attempted tackles, more than any other Liverpool player.

The return of Sakho will boost Liverpool even further, but Lovren seems a comfortable stand-in after recovering from his midweek disappointment.

Serving as a rigid foil to the blossoming Lovren, Martin Skrtel provided another steadfast performance at the heart of the Liverpool defence, in a role that he is making his own.

With the loss of born-leader Sakho, Skrtel has asserted his authority effectively, conducting Lovren and Emre Can when off the ball, and ensuring their faults were covered when required.

This stems from his comfortable style in possession—keeping things simple, mainly—and Skrtel boasted another squad-high passing accuracy of 88.9 percent.

As the deepest lying centre-back, the 30-year-old made sure he was in the right position when City broke through the Liverpool back line.

Skrtel made 12 clearances, more than any other Liverpool player.

Joe Allen Wins Out in Battle With David Silva

Of all of City’s star players, it has perhaps been David Silva who has shone most brightly this season, with Aguero suffering from regular injury issues, Vincent Kompany completely out of form and Yaya Toure inconsistent.

With City’s 4-2-2-2 formation jarring with Liverpool’s 3-4-2-1, there was always the danger of Silva, the Citizens’ creative master, finding space to drift through and feed their onrushing attackers.

Luckily for Rodgers, however, Joe Allen was in exceptional form in the centre of midfield.

Intelligent on and off the ball, and alert at the crucial moments, Allen’s man-marking of Silva—particularly in the second half—was crucial to Liverpool’s dominance.

Allen made three successful tackles and one interception in a performance of all-round mastery.

Adam Lallana Adds a Few Strings to His Bow

Looking at Liverpool’s substitutes’ bench ahead of this fixture, the presence of Fabio Borini, Daniel Sturridge, Mario Balotelli and Fabio Borini on the seven-man reserve list alarmed many—four strikers?

But the beauty of Brendan Rodgers’ 3-4-2-1 system is that it not only magnifies the brilliance of its individual players by fielding them in their most effective positions, but also suits a malleable approach.

Adam Lallana, enjoying himself in the No. 10 role on Sunday, proved this.

On Sturridge’s introduction, replacing Lazar Markovic on 76 minutes, Lallana moved into the right wing-back role; when Alberto Moreno was withdrawn on 83 minutes, with Kolo Toure moving into defence, Lallana shifted to left wing-back.

In both positions, Lallana looked composed and more involved than either Markovic or Moreno.

One of the most endearing features of Lallana’s game is his work rate, despite misgivings over his match fitness, and the 26-year-old proved he can perform in these positions at Anfield.

Liverpool bowing out to Besiktas in the Europa League was a disappointing landmark within this season—Europe’s second-tier knockout competition was a good shot at silverware for Rodgers.

But, as well as the increased preparation time their exit allows, the rotational approach Rodgers took to this midweek fixture aided Liverpool against City.

Henderson didn’t travel to Turkey due to injury, while Coutinho stayed on Merseyside in order to rest.

Both looked rejuvenated on Sunday, and their presence on the score-sheet is the perfect evidence of this, but Coutinho in particular looked to benefit immensely from this brief rest.

At the heart of every Liverpool attack, Coutinho provided Rodgers’ side with thrust and ingenuity with a man-of-the-match performance.

Who stood out for you in Liverpool’s 2-1 win over Manchester City? Let us know in the comments below.