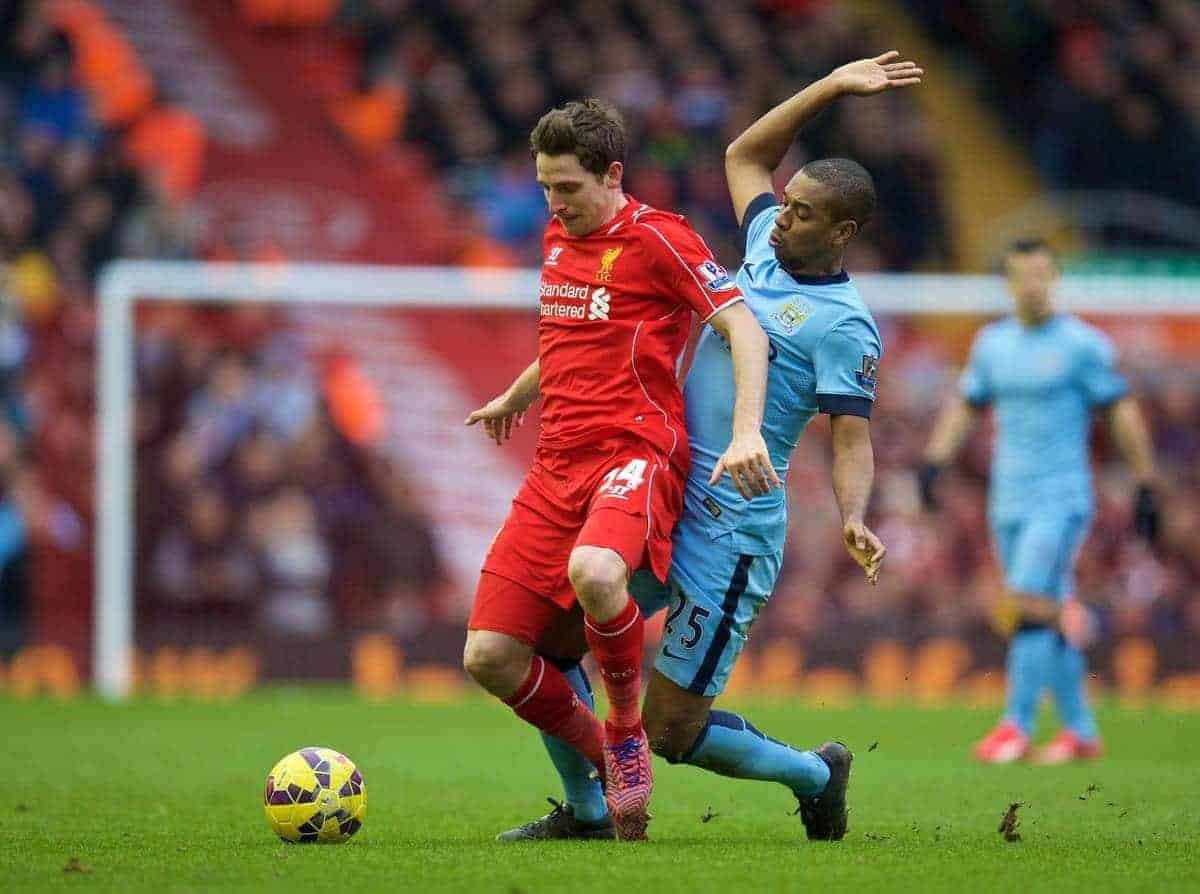 Recent reports suggest Joe Allen is set to sign a new deal at Liverpool, and while he has improved of late he must still do more, writes Henry Jackson.

According to Dominic King of the Daily Mail, Liverpool have begun talks with Allen over extending his current contract at Anfield, which expires in a little over two years time.

The new deal appears to be a reward for an impressive run of form of late, in which the Welshman has proved to be an influential part of Liverpool’s midfield in the absence of Steven Gerrard and Lucas Leiva.

Although the 24-year-old deserves great praise for his resurgence, he still has a long way to go before he proves he is the real deal.

Nobody quite divides opinion at Liverpool in the way Allen does. To some, he is an ineffective player who simply doesn’t do enough in any aspect of his game, while to others he is the understated glue that holds the Reds together whenever he plays.

Ever since signing for £15m from Swansea in August 2012, there has been enormous pressure on Allen to justify his hefty price tag.

Brendan Rodgers’ gushing praise of the Wales international upon his arrival, in which he infamously, and perhaps needlessly, referred to him as the ‘Welsh Xavi’, only heightened expectations.

Having started extremely well, winning the Player of the Month award at the first attempt, Allen has spent two years in and out of the side, showing glimpses of class but often struggling to make any kind of impression.

Although there have been times when the former Swansea man has looked like he doesn’t belong at Liverpool, injuries to Gerrard and Lucas have seen him excel in the last few weeks and outline his potential in a Reds shirt.

Whether the burden of not having to play alongside the iconic Gerrard has helped is potentially a reason for this; something Jordan Henderson clearly shows when the skipper is out.

He was superb against both Southampton and Manchester City, and good against Burnley, showcasing exactly what it is that made Rodgers bring him to Anfield with him in the first place.

His use of the ball was quietly excellent, full of zip and incisiveness, he read the game brilliantly and defensively he was dogged and determined.

Although Philippe Coutinho won the Man of the Match award against Manuel Pellegrini’s side, it was Allen who was the key to Rodgers’ side’s brilliance on the day.

His average passing accuracy of 89.2% in the Premier League this season is second only to Martin Skrtel, while his combined average of tackles and interceptions per game (3.6) is bettered only by Dejan Lovren (3.8), Javier Manquillo (5.4) and Lucas (5.8).

For all his excellence in the victories over Southampton and City, there can be no denying that the diminutive midfielder still needs to do far more.

Just one goal in 66 Premier League appearances for Liverpool is an incredibly poor return, regardless of whether he’s a deep-lying midfielder or not.

He has enough quality to be a four- or five-goal-a-season man, and needs to prove he is not just a cog in the wheel, but a match-winner.

He needs to start showing a consistency that has been lacking throughout his Reds career, much in the same way Henderson and Lucas now do after tough starts to their time on Merseyside.

In fairness to Allen, there are obvious excuses to be made for his lukewarm spell at Liverpool to date. For starters, injuries have hampered his progress greatly.

In his two-and-a-half years at Anfield, he has never started more than six matches in a row, with his longest run being in recent weeks until picking up a frustrating hip problem.

Time and time again he has started to gain some sort of form and confidence, only for it to be ruined by a niggling or more serious injury.

It’s also easy to forget that Allen remains a young player. At just 24, he is still very much maturing as a footballer, and has his best years ahead of him.

He is now at the age Lucas was when he really started to shine as a Liverpool player, and considering the way the Brazilian turned things around, surely his teammate is deserving of some patience from his detractors.

There are some Liverpool fans who will simply never warm to Allen, much in the same way there are still some who remain bizarrely unconvinced by Henderson.

He has shown in the last weeks how effective he can be, however, and offering him a new deal makes total sense.

With Gerrard and Lucas far from assured places in the side when they return, the Welshman will surely see the last few months of this season as the perfect chance to make himself a regular, as Rodgers’ men look to finish in the top four and win the FA Cup.

Whether he has the quality to become a future key man is certainly debatable—especially with players like Miralem Pjanic linked with moves to Liverpool—but he can certainly remain a solid squad member at worst.

His goalscoring and general influence has to improve greatly if he is to truly turn into a top player for the Reds, but there are signs that Allen is starting to gradually find his feet.

He is worth persevering with.