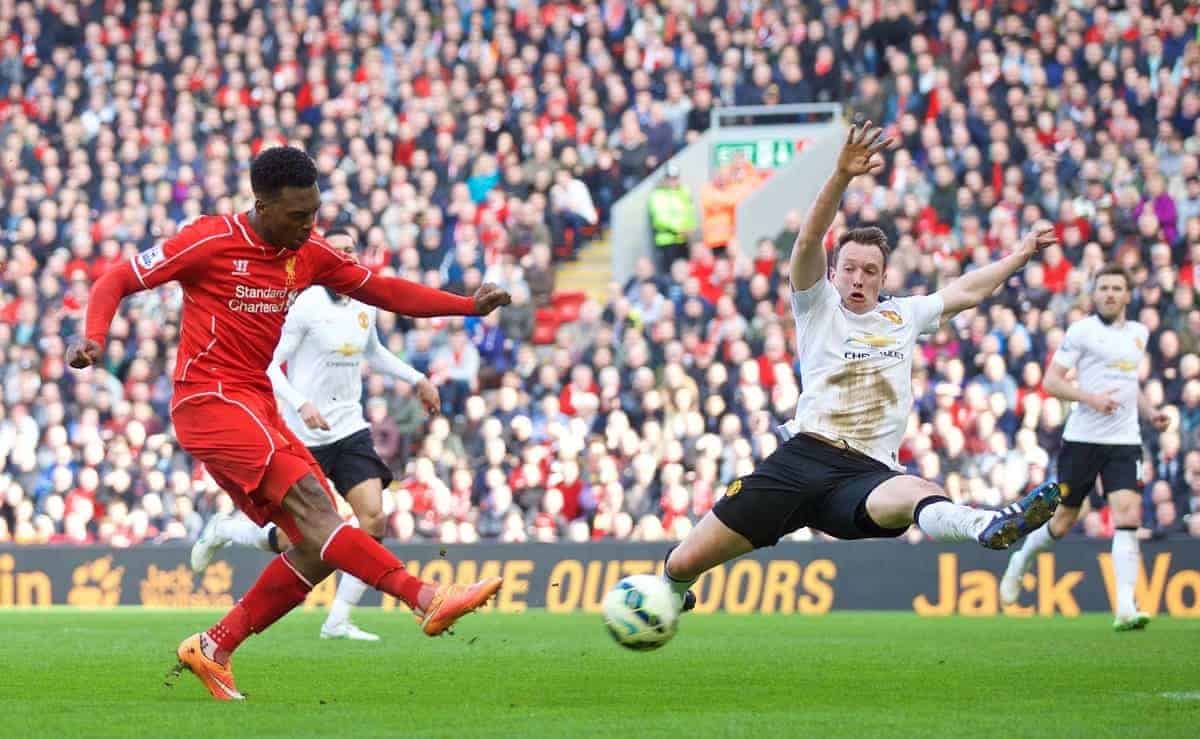 Two goals from Juan Mata were enough to consign a poor Liverpool defeat in what was a must-win clash for the Reds against Manchester United at Anfield on Sunday.

The talking point of the afternoon was half-time substitute Steven Gerrard’s dismissal after just 38 seconds after stamping on United’s excellent midfielder Ander Herrera, but it was the Reds’ limp display that should be cause for concern for Brendan Rodgers.

A goal from Daniel Sturridge and a late penalty save from Simon Mignolet gave Liverpool fans something to cling on to, but Rodgers’ side were outplayed.

Here are our player ratings from Sunday’s defeat.

Barring a few sloppy touches, Mignolet was once again one of Liverpool’s best players, with his late penalty save compounding this performance.

He got a touch to Mata’s first, and could do little with the Spaniard’s majestic second.

An excellent penalty save to deny Rooney his first goal at Anfield for 10 years.

One of Can’s worst games: the 21-year-old failed to keep up with the pace of the game, and with the physical dual with Marouane Fellaini—a move to right-back gave him a bit more joy, but to no real effect.

Can gave away United’s late penalty with a clumsy challenge on Daley Blind.

With Wayne Rooney surprisingly muted throughout, Skrtel’s qualities weren’t put to best use by Rodgers, with Can struggling to deal with the threat of Fellaini.

Nevertheless, the 30-year-old performed his physical duties comfortably, although will be sweating on the threat retrospective action for his off-ball contact with David De Gea at the final whistle.

One of Liverpool’s best players and a consistent outlet on the left-hand side of the back three; continued to showcase his strength and finesse when Rodgers switched to a four-man defence.

Operating first in a right wing-back role, then as a second striker, then moving into left-back, Sterling’s versatility was his undoing at Anfield on Sunday.

This shunting from position to position doesn’t do the 20-year-old any favours, who delivered a weak and inconsistent performance. Needs to be pushed into a central attacking role for his and Liverpool’s sake.

Henderson was one of Liverpool’s better players in the first half, with some great passing and typical fervour helping the Reds to build momentum after Mata’s opener—a sumptuously weighted ball across to Sturridge almost gave Liverpool an equaliser before the break.

After Gerrard’s dismissal Henderson struggled along with the rest of his side, and Liverpool’s possession play was near non-existent.

Allen failed to gain any foothold on proceedings, putting an end to an exceptional run of form, with his guile and finesse the wrong combination on this occasion.

He was bullied off the ball consistently by his nemesis, the lively, omnipresent Fellaini.

A measure of sympathy can be provided Moreno, who had to do more running than most Liverpool players at Anfield on Sunday, with United’s attack stretching that left-hand side.

However, the 22-year-old was at fault and out of position for both of United’s goal, showing an immaturity—rightly withdrawn after the hour mark.

Continuing a seemingly untouchable run in Rodgers’ starting line-up, Lallana was off-pace throughout the first half, with his near-miss to De Gea’s right his only notable contribution.

Hooked at half-time, with the England international making way for the ill-fated Gerrard.

One of the only players who, with Liverpool on the attack, looked capable of producing with any form of ingenuity, Coutinho was pinned down as a danger-man by United.

Awarded an assist for his delicately threaded through-ball for Sturridge’s consolation effort.

A lacklustre run of form for Sturridge continued at Anfield on Sunday, with the 25-year-old’s movement and off-ball play completely at odds with much of Liverpool’s attack.

Despite this, Sturridge’s clever lay-off almost set up Lallana in the first half, and his clinical finish on 69 minutes gave the Reds a glimmer of hope—but Sturridge’s all-round game is seriously lacking.

Much of the build-up was centred on this being Gerrard’s last north-west derby, and the occasion clearly got to the captain, seeing red within 40 seconds.

Gerrard’s dismissal was indefensible, and the 34-year-old cost Liverpool the game.

Ostensibly introduced to add another attacking presence and, barring some clever flicks, the striker failed miserably.

With Liverpool down to 10 men, Balotelli lacked a level of industry.

With Gerrard’s imposing red card, Rodgers had little to play with in the second half—the introduction of his captain looked to be a smart move, initially.

Moving into a back-four system, and looking to make attacking changes, Rodgers’ second-half response was perhaps the best he could do with what he had on the day. Credit to him for not sitting back and playing 4-4-1 with 10 men.

Was spot on with Gerrard’s red card, but Atkinson was far too inconsistent throughout.

Giving Allen a caution early on for a rather innocuous challenge, and then ignoring several others throughout the game highlighted this hit-and-miss refereeing display.