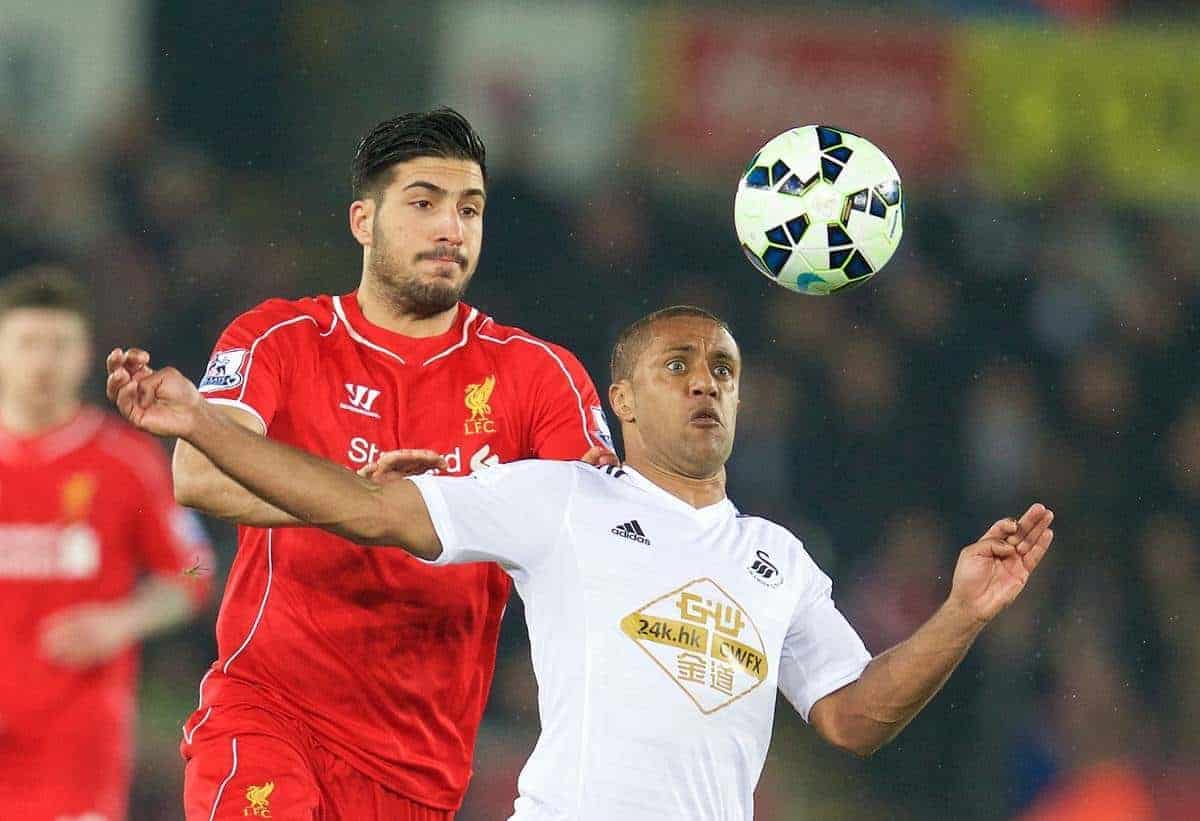 Jordan Henderson‘s lucky strike earned Liverpool a huge victory over Swansea at the Liberty Stadium on Monday evening, and we round-up the best social media reaction from the game.

The Reds simply didn’t used to win matches like this. Despite not being at their best at any point, Henderson’s fortunate ricochet effort after 67 minutes earned Brendan Rodgers side an enormous three points.

For so long it looked as though Liverpool weren’t going to break the deadlock, and if anything it was Garry Monk’s side who deserved the lead at half-time.

After the break the visitors improved greatly though, dictating the game and creating chances. That Henderson goal could prove to be one of Liverpool’s most important of the season, and it was nice to see a moment of real luck for once.

Simon Mignolet excelled in goal once again, making two terrific first-half stops, while Joe Allen was again a hugely impressive figure at the heart of midfield. Martin Skrtel and Mamadou Sakho were terrific too.

The win leaves Rodgers’ men just two points behind Manchester United heading into the vital clash with Louis van Gaal’s side at Anfield on Sunday. Victory in that really would put the Reds in pole position to finish in the top four.

Here’s how fans and journalists reacted the game on social media, both during and after the game:

Since Christmas #LFC have taken 32 points from 12 PL games, 10 more than Chelsea in that period (from 11 games)

Good change of tic-tacs by Rodgers 2nd half

Joe Allen was superb for Liverpool, from what I could tell.

‘Zinedine Biscan’ on the forums:

Massive win. Goal was lucky but we deserved something from a good second half. Win our next game and we go fourth.

Jordan Henderson has been transformed into a goalscorer since he made the Nivea advert.

Have to laugh at Swansea fans; who tired of mocking Sakho by the time he'd passed them to death & embarked on a mazy run through their side

Get out of jail free card there ? Nice to have some luck for once. Better second half. Joe Allen superb. Sturridge becoming a concern. #LFC

Mignolet, Allen, Skrtel and Sakho were very good. Gerrard very good off the bench too. The rest were poor. Sterling and Lallana so disappointing, Henderson was brutal. Sturridge improved in the second, Coutinho not quite in it enough.

Allen and Mignolet absolutely superb there. Grinding out results.

Credit to Rodgers there. In previous matches he's waited to make a change but not this time. Refreshing to see him be proactive at HT.

Job done. Difficult to pick out any one individual as our stand out player. Six away games without conceding. Who’d have thought we’d have that record back in the autumn? Will have to do better against Utd though.

We've been due a scrappy, deflected, lucky goal like that all season. Absolutely brilliant timing to get it #lfc

Liverpool have now won as many league games in the second half of 2014/15 as they did in the first (8) despite playing nine games fewer.