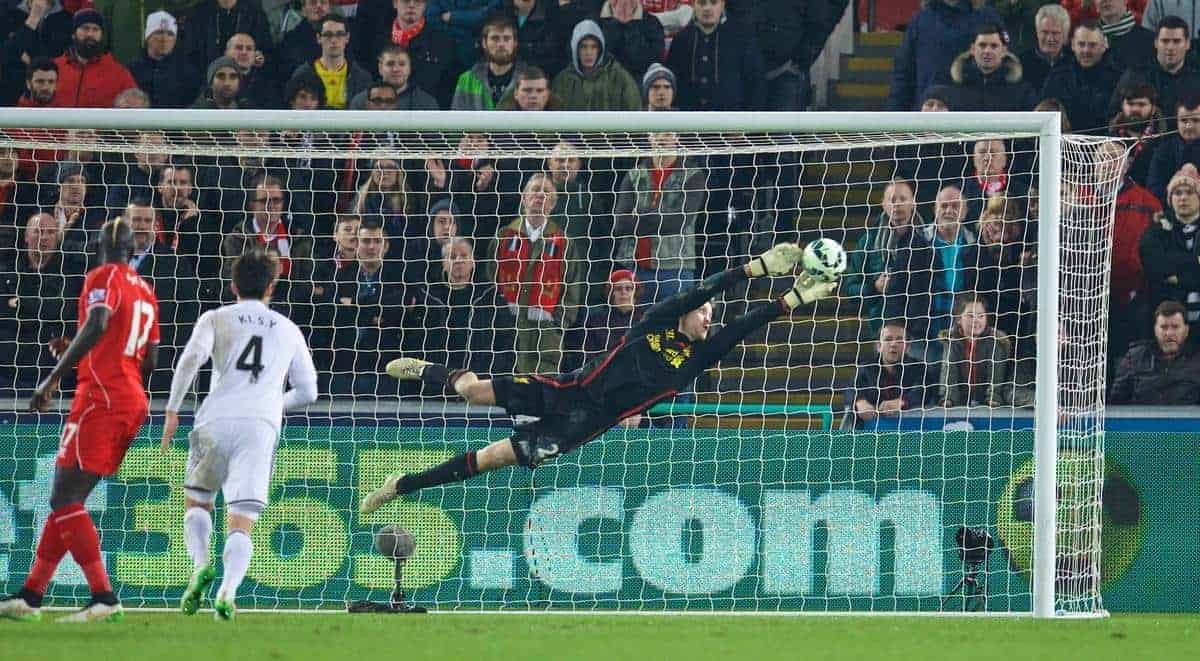 Liverpool ended their Liberty Stadium jinx thanks to Jordan Henderson’s fortunate second-half winner that moves the Reds back to within two points of fourth-placed Man United.

A sluggish first half display was put right by a controlled second half performance from Brendan Rodgers’ side, who took full advantage of the rare slice of fortune that fell their way – keeping themselves right on tails of Man City, Arsenal and United in the race for Champions League qualification.

Henderson: It's a great result. First half we were very disappointed. Second half we passed the ball a lot better. Delighted with 3 points.

While not the prettiest performance over 90 minutes we will see this season it was job done with another vital three points on the board, perfectly setting up next weekend’s clash against United.

Here are the discussion points from the vital win.

Skrtel Solid in Unsettled Back Three

On an unusually uncomfortable night defensively for Liverpool in south Wales, Martin Skrtel turned in a solid and assured display in the Reds back line.

With Emre Can below-par, Mamadou Sakho taking time to settle on his return from injury and the handful Bafetimbi Gomis to compete against, the Slovakian had his work cut-out but dealt superbly with all that was thrown at him on the night.

Brave in the box, winning vital headers and making nine important clearances – the most of any Liverpool player on Monday night – Skrtel battled superbly ahead of Mignolet to keep a below-par defence somewhat in tune, and in a controlled second half display, the 30-year-old also played a fundamental part in Henderson’s winner.

Well needed 3 points for LFC after this weekends results.Mignolet and Skrtel keeping things together. Can't wait for Sunday.Will be electric

Completing an impressive 92.2% of 77 passes played – the most of any Red in the match – it was his precise forward ball that found Sturridge, who produced a deft round-the-corner flick to release the breaking Henderson for the winning goal.

Once again in his central defensive position, Skrtel put in another imposing performance to continue his good form.

8 clean sheets in 14 games with the 343. The #LFC revival continues to be built on defence.

I'm starting to love Mignolet after giving him plenty of stick earlier in the season. Could turn out to be a top cat.

While it was Henderson’s deflected goal that proved to be the difference, the three points go back to Merseyside thanks in no small part to the in-form Belgian.

Despite having an uncharacteristically unsettled back three ahead of him, Mignolet remained an assured influence between the sticks – some sloppy distribution aside – where he made a number of superb stops to ensure of a record equalling clean sheet in the league for his team, as well as recording his seventh of 2015 and 12th this season.

A good save from Bafetimbi Gomis after half-an-hour, stunning full-stretch stop to deny Gylfi Sigurdsson’s curling effort finding the top corner before half time, and a series of convincing punches from corners and command from crosses complimented another authoritative display from the Belgium international.

The rejuvenated ‘keeper continued to answer his many critics with another excellent 90 minutes and his form will be a huge factor in the all-important run-in.

Rodgers on Mignolet: He’s been outstanding. We needed him first half. We were still in the game thanks to him. He’s been excellent.

Returning to the team after missing the FA Cup goalless draw against Blackburn, the ‘Welsh Xavi’ displayed his importance to the current Reds set-up with a man-of-the-match display.

Allen’s bravery provided sloppy teammates with a safe outlet all night, and his ball retention – of which he completed 90% of passes played – alongside his tenacity in midfield allowed for the Reds to regain control of the match in a hugely impressive second half performance.

Taking the sting out of tricky situations with his reliability, control and skill in possession alongside pressing of opposition to win the ball, Allen provided an excellent defensive option alongside his play-making which saw him create three chances; illustrated by his making of five tackles and three interceptions – double his season averages in both departments.

Big win for #LFC tonight. Far from their best but stuck at it and got slice of luck. Allen man of the match for me ahead of Mignolet/Skrtel

The former Swansea man continues to recapture his best form in a red shirt, and his role in swinging the game in Liverpool’s favour with an excellent second half should not be underestimated.

With his team struggling and lucky to be level after a poor first half showing, the Liverpool boss proved his worth with a number of tactical master strokes to transform the match.

In desperate need of a re-group at half time, Rodgers’ switch to a diamond shape midfield to match Swansea proved a stroke of genius as it stopped Garry Monk’s side being able to play through midfield as easily and pinned in their adventurous full-backs with Sterling and Lallana now deployed in more advanced positions.

Allowing the Reds to then play higher up against Monk’s team and thus introducing a change of mind-set, taking off Alberto Moreno to introduce Steven Gerrard for extra midfield control also proved an excellent move, with the Captain in good form with and without the ball playing sensibly from deep.

Able to press high, encourage runners from deep and disrupting the home side’s rhythm while asserting themselves on the game, Rodgers watched his shrewd strategic work pay off as his team took firm control of the match and grabbed another huge win on the road.

Daniel Sturridge endured another poor night spearheading the Reds attack as his disappointing form continues since returning from injury.

The 25-year-old was way off the pace all night – shown perfectly by the fact he was dispossessed four times, the most of anyone for Rodgers’ side – and the striker was sloppy throughout with and without the ball, failing to find the same wavelength as Philippe Coutinho, Adam Lallana and Raheem Sterling.

Sturridge is an issue right now. Still way short of his best and offering very little up front. Not linking up with Sterling/Coutinho either

Second to everything and lacking in the explosiveness usually seen, Sturridge’s inability to link-up with fellow attackers made for a disjointed and blunt attack – epitomised by the fact his first meaningful contribution to the game arrived when his excellent flick released Henderson who made his own luck for the goal.

That was about as good as it got for the England striker who produced half-baked pressing and moaned throughout – though he did see a great instinctive right-foot curler hit the post in injury time – and another lethargic display makes his poor recent form an increasing concern.

Huge win that for Lfc tonight sets up Sunday against Man United at Anfield. Loved the team celebration when the 'great' goal went in!!

Next up for the Reds is the visit of arch-rivals Man United to Anfield where a win over Louis van Gaal’s side would move Liverpool into the top four for first time this season.