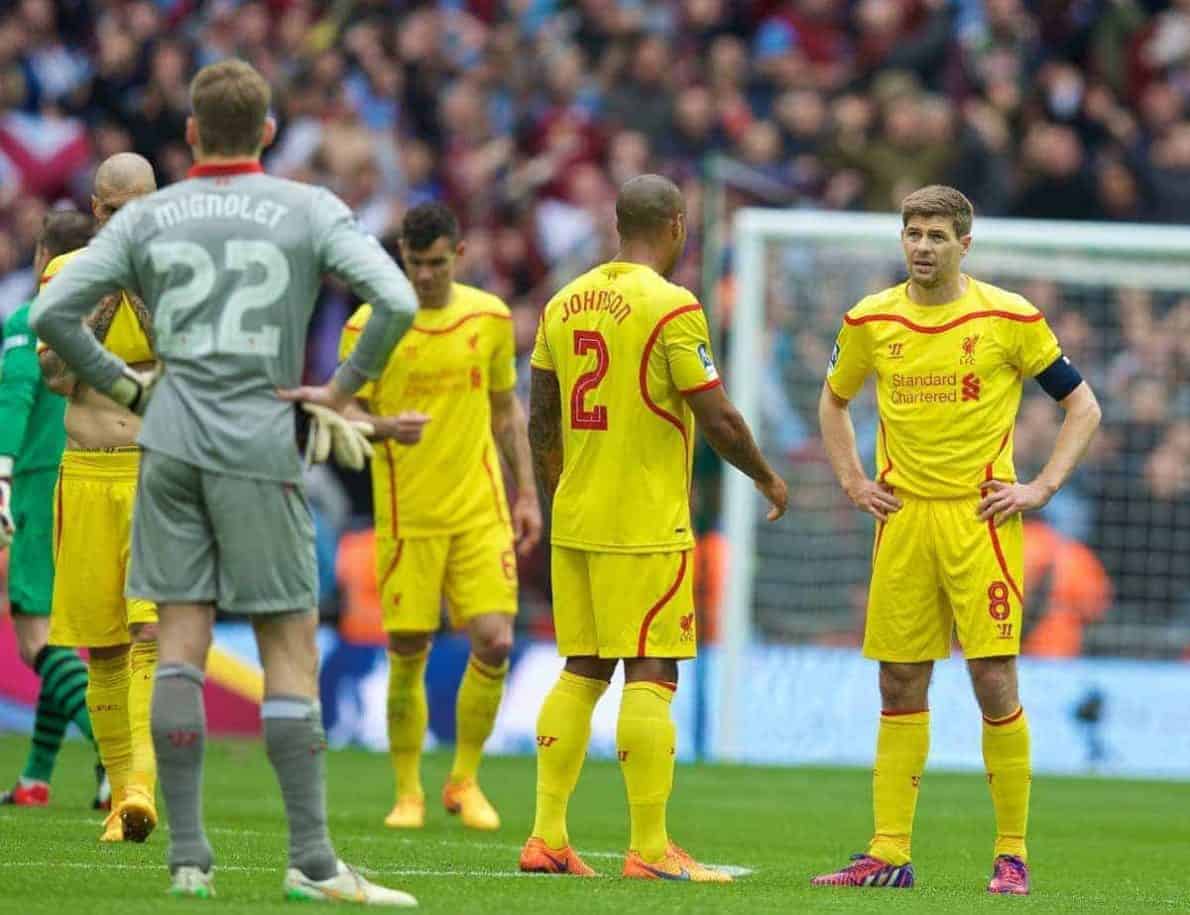 Brendan Rodgers’ numerous tactical adjustments cost his side dearly as a poor performance resulted on a shocking day at Wembley, writes Ben Twelves. Liverpool’s hopes of rescuing their disappointing season with FA Cup glory were ended by Tim Sherwood’s Aston Villa, who ran out worryingly comfortable winners at Wembley.

Goals from Christian Benteke and Fabian Delph after Philippe Coutinho opened the scoring with a deflected finish, proved enough for the Villains to book their place for a second trip to the capital in May where they’ll take on Arsenal in the showpiece final.

It was an appalling performance from the lacklustre Reds on another big occasion under Rodgers, and the Reds boss must shoulder a large portion of the blame for the never-ending tactical adjustments which undoubtedly contributed heavily to a woeful afternoon at the Home of Football.

Not sure what planning led to ideas for how LFC should approach this game but 3? 4? SYSTEM changes in-match (!) shows how flawed it was.

A manager known for usually sticking to what works, it’s fair to say that most of the watching world would have been right in expecting the Reds to take to the immaculate Wembley surface in a 4-3-3 formation.

After all, within that shape Liverpool had recorded back-to-back wins and clean sheets over the last two fixtures, alongside producing arguably their most dominant performance of the season last time out against Newcastle in a game that the Reds looked to be rediscovering a lot of the positives in their play – especially going forward.

But despite the far from blistering but reasonable performance level from over the last two fixtures, Rodgers opted to twist and start with the 3-4-2-1 – a formation that the Northern Irishman was forced to move away from after results against Arsenal and Man United saw the system ‘sussed’ by opposition. And it was again today.

A poor opening 20 minutes followed as Villa dominated with and without the ball, keeping Liverpool stuck on the back foot and the defence busy, with the midfield chasing shadows and the attack starved of supply to make the difference.

This rightly forced Rodgers into early alterations, but it worked completely against his side, who looked lost as an equally disjointed performance unfolded.

The Liverpool manager had to change something to get his side back into the game but as the Reds attempted to adjust to each tactical shuffle, their play badly suffered the consequences.

It was right to move to swing the game in the Reds favour, make no mistake about it, but the back-up plans, formations and switches turned to were all wrong, and most alarmingly, scarily reminiscent of those which proved the costly factor behind a dreadful first half of the season.

All those comments about Palace away being the turning point and yet we end up with Lovren & Skrtel in a back 4 and Gerrard at DM.

The revisiting of 4-2-3-1 – the system that Liverpool failed to get to grips with at the beginning of the season – was first utilised, and while it wrestled an element of control as the Reds were able to press better due condensing middle areas, it was far from the solution as the Reds failed to gain any control in the game despite a brief five minute spell in which Coutinho put the Reds ahead.

Villa remained firmly on the front foot despite falling behind as they stopped Liverpool at source, cutting off supply to danger men and forced their way back into the game and nothing stemmed the tide for the Reds who managed to scrape through to half time level.

Still looking to grab control of the tie, Mario Balotelli’s introduction in place of Lazar Markovic – who can count himself unlucky to have made way – saw Steven Gerrard dragged back to the ineffective and exposed deep-lying role where ultimately another tactical change backfired, this time in a 4-4-3.

The Captain was badly exposed once more by the team that have proven to do so time and again throughout Rodgers’ tenure, and the marauding Delph proved too quick and energetic for the 34-year-old, epitomised as the Villa enforcer scored the match-winning goal having sprung an attack in an area Gerrard should have been commanding before running off the Scouser to finish the move.

Despite the Captain’s pin-point ball to Balotelli which saw the Italian finish well but see his goal incorrectly ruled out, the Reds never found their controlling style, shown as Rodgers made the third and final in-game tactical flicker as he ended the match with what he started and a three man defence as Rickie Lambert was given all of four minutes to find an underserved equaliser.

After falling behind, there was no way back for Liverpool, who looked bereft of confidence, ideas and quality in a system which now boasted the largely isolated Balotelli as the lone striker, something that has proven not to work many times previously.

Defensively unsettled, the dominant Christian Benteke enjoyed arguably the easiest afternoon of his season as his presence caused panic at the back and prevented the Reds defence using the ball productively too, as Villa harried and pressed tenaciously in midfield.

Struggling to move the ball and create anything with confused systems and mixed messages, the Villains smelled blood against their underperforming opposition and took full advantage.

With no rhythm in their passing or energy in their play, Liverpool were well beaten and after large periods on the back foot against a side scrapping to avoid relegation from the Premier League, the Reds deserved nothing less on a day where the performance let down the 32,000 strong travelling Kop.

Sherwood’s side must be credited for the job done in ensuring Liverpool endured a miserable return to Wembley, but the numerous and costly rolls of the dice made by Rodgers unquestionably played its part in a forgettable performance on a terrible afternoon at Wembley.