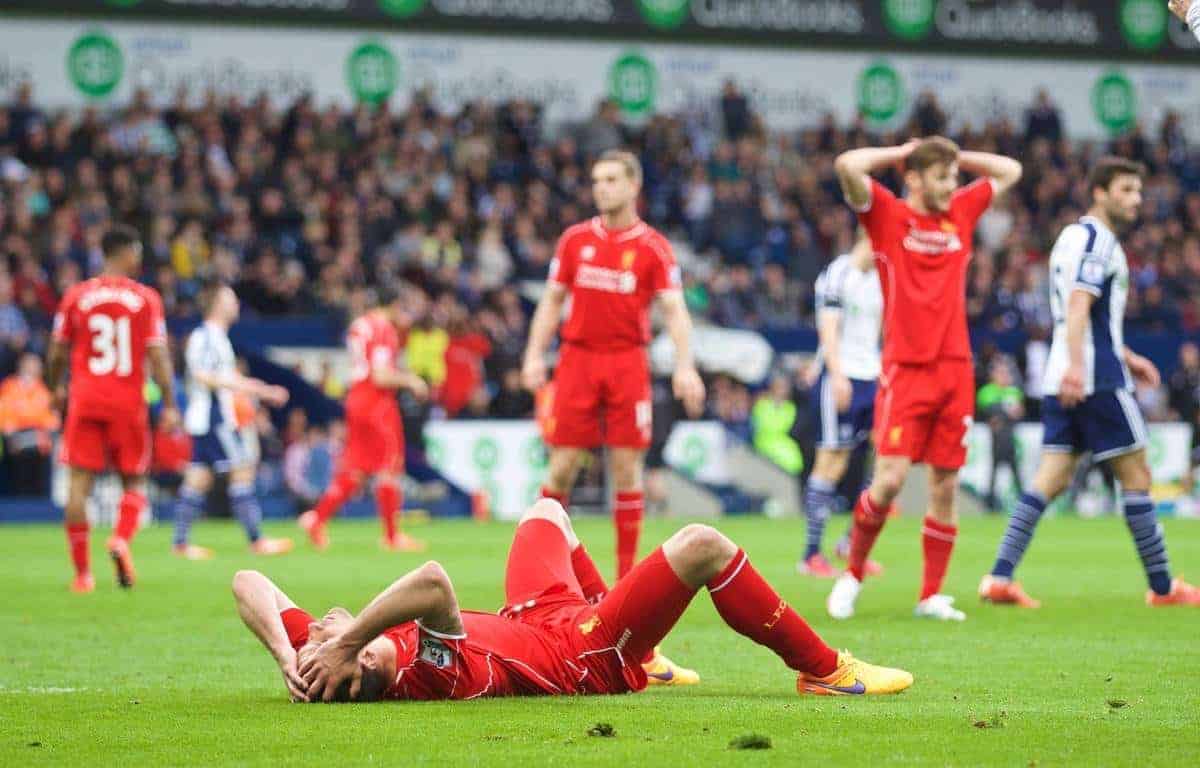 We round-up the best of the morning newspaper reaction following Saturday’s forgettable 0-0 draw between Liverpool and West Brom.

This was effectively the day the Reds’ season came to an end; certainly in terms of their Champions League hopes.

This stalemate against Tony Pulis’ side, coupled with Manchester City‘s 3-2 win over Aston Villa, surely puts a top-four finish out of Liverpool’s reach now.

“For the most part it was awful”- Liverpool fans react to dull stalemate with West Brom: http://t.co/bz7D9xXrZ1 pic.twitter.com/UAGkhNQFxM

The showdown at the Hawthorns was dominated by Brendan Rodgers’ men from start to finish, but despite having over 70% possession, you never really felt that elusive goal was coming.

Liverpool’s lack of threat in front of goal remains a serious problem, and one that needs to be addressed this summer. That and several other issues.

There were several journalists unimpressed at Liverpool’s level of desire to win the game, on what felt like a real end-of-season clash:

The Reds failed to produce the response Brendan Rodgers had demanded following their FA Cup semi-final defeat to Aston Villa as they produced another disjointed display.

The relegation-threatened Baggies defended in numbers throughout and Liverpool weren’t good enough to break them down.

In a non-combative first half, lethargy seemed to be the watchword of the day, both sides seemingly intent on not expending too much energy lest they be tired for their imminent summer holidays.

To West Brom and Liverpool’s credit, they did at least rouse themselves to contest a lively second half but, even so, the contrast with this time last year was marked for both teams.

Steven Gerrard made his 500th Premier League appearance but that will be the only memory of this insipid stalemate which surely extinguished any lingering hopes of a Champions League place.

Liverpool possessed the cutting edge of a plastic spatula, with Jordon Ibe producing their best chance by striking the crossbar, and Rodgers is counting down the days until he can perform surgery on his squad.

This is supposed to be an entertainment industry. Television companies are paying £5 billion to show it from next year. And we all have bad days at the office where little goes right.

But there are few excuses worthy of the name for such insipid, uninspired dross – for the most part – served up at the Hawthorns.

In the end it was a game that confirmed to Brendan Rodgers what he already knew. With Luis Suárez long gone and Daniel Sturridge absent once again, Liverpool are unrecognisable from the team that swept opponents aside last season.

Draper was impressed with the performance of Dejan Lovren, who produced arguably his best display in a Reds shirt to date:

If Rodgers’ wanted to see signs of hope, he need look no further than Lovren’s display — finally he looked like the centre half they signed from Southampton.

While Liverpool’s defence were never put under any sustained pressure, Lovren won his personal duels all afternoon.

Whether it was against the powerful Victor Anichebe, the pacy Saido Berahino or substitute Brown Ideye, who possesses a combination of both, Lovren came out on top every time. He also made a vital goal-line clearance and was Liverpool’s best performer on a frustrating day.

The Independent felt the opposite about Mario Balotelli though, who became less and less effective as the game went on:

Beyond one fiercely-struck half-volley which went just over, Balotelli’s impact was negligible, as he drifted into innocuous areas of the field far too often.

His runs were either too predictable or non-existent, the few dangerous crosses LIverpool did produce flashed by without him even in the frame and he failed to have a shot in anger in the 74 minutes he managed before being substituted.

Liverpool’s more pressing problem at the end of the season might be less about getting the best out of Balotelli, and more about getting rid of him.

They also focussed on Steven Gerrard’s relative lack of impact, as his depressing final season at Anfield continues:

After the dreadful disappointment of seeing his FA Cup dreams thwarted, Steven Gerrard might at least have thought that Fate would throw him a bone on the occasion of his 500th appearance in the Premier League.

But this appears to be one season when his fairytales are being shredded before his very eyes: there was no goal for the midfielder, and few sparks of inspiration in a game that was crying out for a creative lift.

The 34-year-old looked what he is, a spent force who took all the energy out of Liverpool. That is one of the saddest aspects about this season for Gerrard, a player who once seemed to permanently play at hurricane speeds.

Now, opposition sides know to just let him have the ball, because he won’t be able to do all that much with it. It is reminiscent of Roy Keane’s final season with Manchester United — 2005-06 — except with less of the anger.

Next up for Liverpool is Tuesday trip to Hull (19:45pm GMT), before hosting QPR next Saturday (15:00pm GMT). Let us know your thoughts on the West Brom game in the comments below.