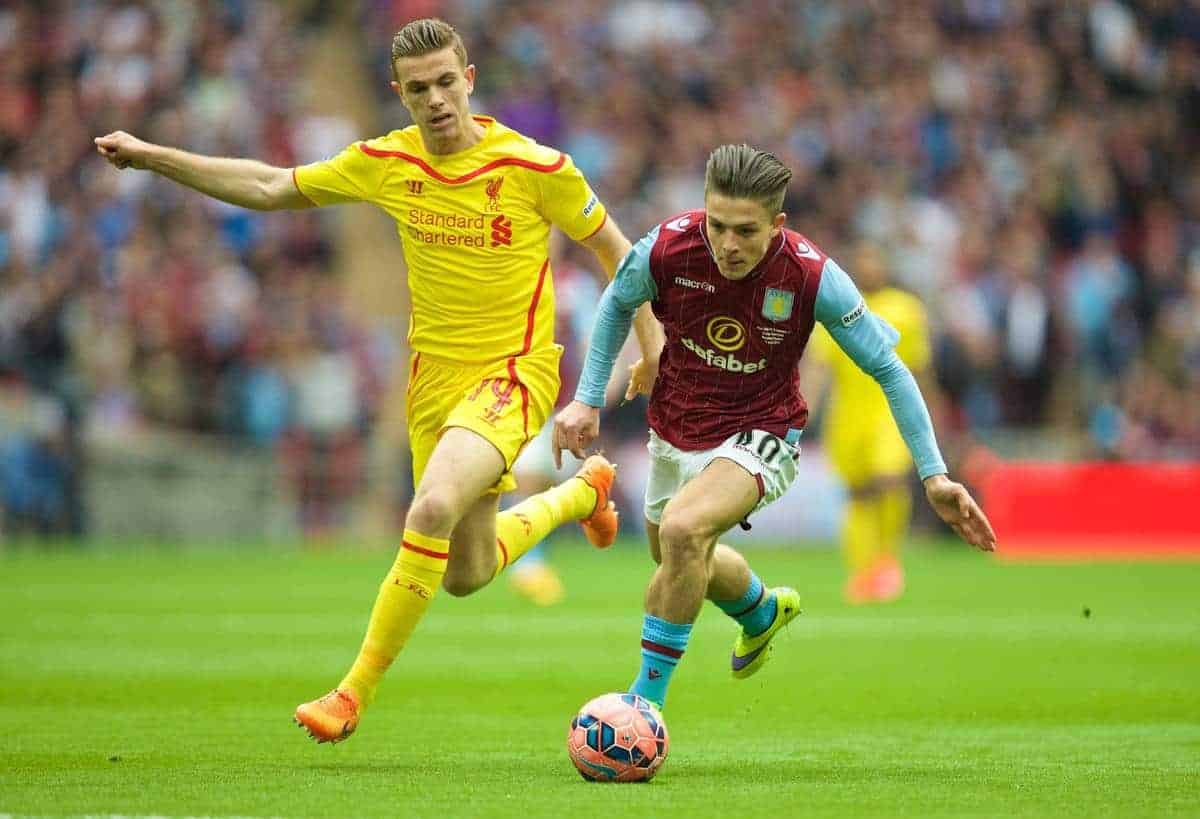 Tim Sherwood’s Aston Villa heaped misery upon Liverpool at Wembley on Sunday, with a 2-1 victory taking the Villans to the FA Cup final.

Goals from Christian Benteke and Fabian Delph cancelled out a fine strike from Philippe Coutinho, with Villa’s slim lead ultimately flattering the Reds, who were beyond poor.

Brendan Rodgers will now have to take stock as he plots to recover from another disappointment.

But where does he start?

With Rodgers returning to a 3-4-2-1 formation in the opening stages at Wembley, this system saw Lazar Markovic return at right wing-back, with the 21-year-old needing to produce a better performance than he has done in his last handful of appearances for Liverpool.

Unfortunately, once again, Markovic was not given the chance to do so, substituted at half-time.

Despite some bright, incisive passing and some troublesome, direct running, Markovic was the one deemed dispensable when Rodgers turned to Mario Balotelli at the break.

This continues a disappointing trend for the promising attacking midfielder, who is barely given a chance to impose himself on games before getting hooked at the first possible opportunity.

Philippe Coutinho Left to Dole out the Inspiration Alone

With the news emerging during the week of Coutinho’s double PFA award nominations, this signalled a round recognition of the growth of Liverpool’s 22-year-old playmaker, who has now become the Reds’ very best player.

It took a measure of Coutinho magic to decide the quarter-final replay against Blackburn Rovers, and it was once again left solely at the feet of the Brazilian to provide Liverpool with their inspiration.

He did his best, too, with the joint-most key passes (three) and successful dribbles (two) of any player at Wembley on Sunday, and opened the scoring with a fantastic finish.

But he must not be expected to do it alone—too often those around him were off-pace and inactive, out of sync with Coutinho’s creative majesty.

Coutinho deserves his end-of-season recognition for being the sole spark of positivity amid the dying embers of an abysmal campaign on the whole.

In the build-up to the game, Rodgers spoke of the importance of big-game players in ties such as this: “On days like today you want your experienced players to perform, and there few more experienced than him.”

The player in question, of course, was Steven Gerrard.

Unhappily, and quite predictably for this season, however, Gerrard once again failed to impose any of his big-game experience when it counted, with a drab and lifeless performance at Wembley.

First deployed alongside Coutinho in a central attacking midfield role, and then moving into a pure No. 10 role in the 4-2-3-1, Gerrard was completely out of the game, touching the ball just 20 times before the break.

With the introduction of Balotelli at half-time, and Liverpool’s switch to a 4-3-3, Gerrard dropped back into a deep-lying midfield role, and was similarly peripheral.

The way in which Delph coasted past him for Villa’s winner, with the captain failing to track back with any true effort, exemplified Gerrard’s performance.

If that was experience, is there a real argument for its importance?

Liverpool’s loss will likely centre around the failures of Gerrard on the big stage, but alongside him, Henderson was just as poor.

The captain-in-waiting has a tendency to shrink on big occasions, and with Villa’s midfield energetic and suffocating, Henderson was pressed out of the game from the first whistle to the last.

It is miserably fitting that the player who dominated Henderson throughout this semi-final was Delph who, if Liverpool’s long-standing reported interest is to be believed, could have been competing with him for a place in Rodgers’ line-up next season.

Henderson was Liverpool’s second-worst passer of the ball to have completed the full 90 minutes, with a passing accuracy of just 74.6 percent, and made just one tackle in a deflated showing.

Meanwhile, Delph was remarkably crisp on the ball, completing 93.9 percent of his passes, and steadfast in his defensive duties, consistently driving the Villans forward.

With Liverpool’s captain and vice-captain both failing to gain a foothold on the game, there is no surprise the Reds failed.

Brendan Rodgers: Running Out of Ideas?

After the game, Rodgers told reporters that: “We need to learn to play better in big games. Maybe the occasion got to us a little bit.”

Hopefully, the manager will include himself in this naive bracket—Rodgers looked way out of his depth, and was criminally outmaneuvered by Sherwood when it mattered most.

He tried his best, perhaps, tactically, switching from a 3-4-2-1 to a 4-2-3-1, then a 4-3-3 and on to desperate mishmash on Rickie Lambert’s inclusion, but as Villa continued to dominate, these tweaks looked increasingly like drastic rolls of the dice from an out-of-depth manager.

Rodgers is right to criticise his side’s big-game mentality—a lot of his players were tactically weak throughout.

But this must also apply to a man who kept a lifeless Gerrard on the pitch for 90 minutes.

Liverpool now stand to end the season out of the Premier League’s top four, and without silverware once again—Rodgers has, ostensibly, failed both of the targets set for him for 2014/15.

Inevitable calls for his head are premature, despite the looming shadow of Jurgen Klopp, but Rodgers must do better.

What stood out for you in Liverpool’s 2-1 FA Cup semi-final loss to Aston Villa? Let us know in the comments below.