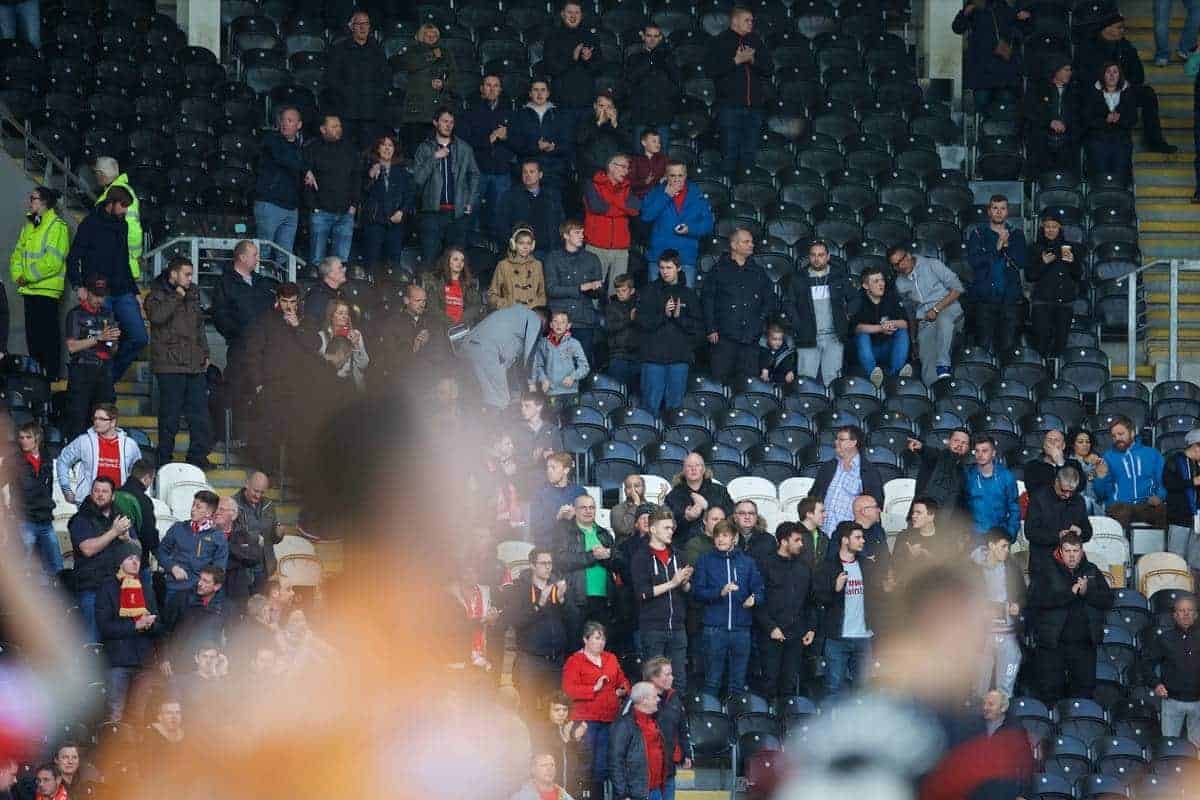 Organisers of the Liverpool fans' boycott of the match at Hull are delighted with the response after up to 1,500 supporters voted with their feet.

Large sections of the away end were empty at the KC Stadium as the Reds lost 1-0 to see their hopes of Champions League football fade away.

Many supporters had purchased B£10 child tickets and not travelled in protest at the B£48 adult ticket price, instead joining demonstrations outside Anfield and the Premier League's London headquarters.

"When we said to people 12 days ago we would be taking this stance ourselves and spoke to half a dozen coach operators from Liverpool who said they would do the same, we were anticipating a quarter of the away end not attending.

"But I think from what we saw last night it was definitely over half and we've had people saying stewards at Hull told them there were 1,500 empty seats, which just shows the anger about high prices in general but particularly the situation at Hull where we were charged three times what Stoke were.

"There were supporters at our protest at Anfield last night who weren't in the away end for the first time in almost 20 years.

"We've never had people actively staying away from matches in protest like we did last night, not even in the very dark days of (former owners) Tom Hicks and George Gillett.

"That shows the level of anger from supporters who had to make a very difficult choice last night.

"One of the most striking things was looking at people who you knew would normally be in the away end hundreds of miles away from the ground.

"It shows how supporters feel. There was a lot of anger and passion from people not only saying 'This is wrong' but talking about what to do next."

Great to see so many here supporting the protests pic.twitter.com/ZedirpsqF6

McKenna said future boycotts were a possibility but they, along with other fans' groups, wanted to pursue more dialogue with clubs and the Premier League.

"We will discuss whether there will be more action in grounds as boycotting a match isn't an easy thing to do and we won't be doing it week in, week out," he added.

"We will talk to other supporters' groups, asking them to take similar action, and sit down and talk with sponsors of clubs and the Premier League to tell them the relationship is broken.

"I don't think they want to be seeing scenes like last night: a half-empty stadium devoid of passion.

"We also want to sit down with the likes of Sky, BT and Barclays and say 'What are you going to do about this?'

"If supporters are priced out then this product they like to market just won't be as financially attractive."