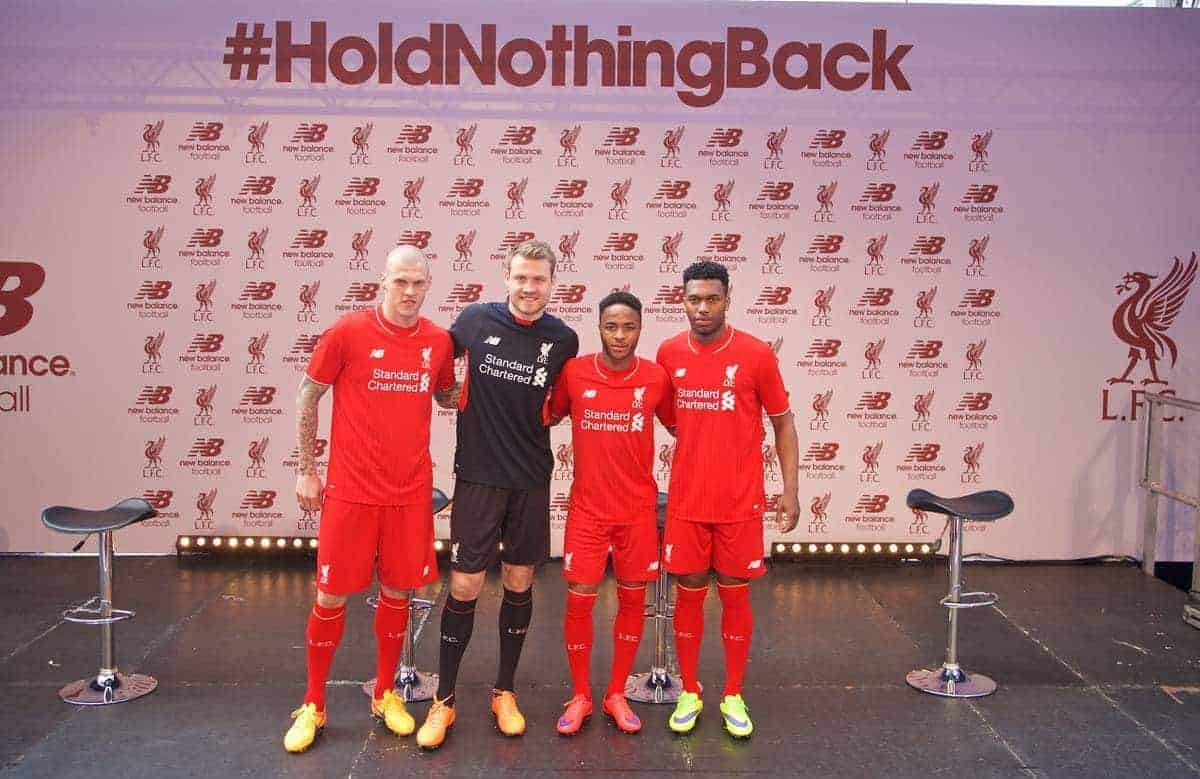 Liverpool officially unveiled their new home kit for 2015/16 on Friday, Jack Lusby attempts to predict the side who will start the season wearing it. The new Liverpool home kit, the first to be manufactured by New Balance, was revealed at Anfield on Friday, but who will be lining up in in the new design come the start of the next season?

Brendan Rodgers looks set to lead his side to a fifth-place finish in the Premier League this season, with a chance of success in the FA Cup, so a reasonably productive summer transfer window is predicted — but one which heralds little in terms of high-profile signings.

With a little optimism and more than a measure of dim realism, an 18-man match-day squad for the start of Liverpool’s has been selected, with Rodgers predicted to return to a 4-4-2 diamond system.

So who could line up in the new Liverpool home kit at the start of next season?

After emerging from a miserable slump to often top class during 2014/15, Simon Mignolet cements his place as Rodgers’ first-choice goalkeeper for the long-term, with the Belgian adopting Brad Jones’ No. 1 shirt as a sign of the manager’s faith.

Mignolet will, however, be spurred by Liverpool’s summer signing of Australian shot-stopper Mathew Ryan, from Belgian Jupiler League side Club Brugge. With Newcastle United struggling in the Premier League, right-back Daryl Janmaat jumps ship and joins Liverpool in an £8 million deal, taking the No. 2 shirt.

Janmaat’s established presence makes him a low-risk option for Rodgers, and the Dutchman is a much more economical choice than the La Liga-bound Glen Johnson.

With Jordan Henderson assuming the departed Steven Gerrard’s Liverpool captaincy for the 2015/16 season, Rodgers opts to reward the loyalty and improvement of Martin Skrtel by entrusting the centre-back as vice-captain.

Skrtel is a centre-back Rodgers can depend on to be available for 50 games a season, pending suspensions, and as such builds his defence around him.

After establishing himself further as Liverpool’s most intelligent, composed and accomplished defender in 2014/15, Mamadou Sakho continues his first-team centre-back role for Rodgers in 2015/16.

With Sakho’s contract running down in to its final two years, the centre-back is rewarded with a new long-term deal as one of Rodgers’ key players.

Despite an indifferent maiden campaign as Liverpool’s left-back, Rodgers keeps his faith in Alberto Moreno, who is more adjusted to the demands of the Premier League in his second season on Merseyside.

With the return to a traditional left-back role, Moreno will be asked to tailor his game to a more balanced approach.

With high-profile calls to replace the departed Steven Gerrard persisting all summer, and Lucas Leiva leaving for Serie A, Rodgers will stick to his guns and put his faith in an option already in his side in Emre Can.

After an extended run in the position during pre-season, and the switch back to a back-four defensive system with the signing of Janmaat, Can will start at the base of Liverpool’s midfield.

Joining Liverpool on a low-risk free transfer from Manchester City over the summer, James Milner is given the regular central midfield role he has been craving for seasons by Rodgers, who will count on him as one of the Reds’ senior figures in 2015/16.

Milner’s adaptability and mobility suits him perfectly one of the diamond-flank roles in Rodgers’ 4-4-2, allowing him to support the attack and interchange roles with Can when the German attacks.

As Liverpool’s bona fide captain on the departure of Gerrard, Henderson will continue his role as an ever-present in Rodgers’ midfield, signing a new five-year contract as a mark of his commitment.

Resuming the role he performed so well in the 2013/14 season with the switch back to a 4-4-2, like Milner, Henderson’s qualities would suit Rodgers’ chosen formation, and the pair will combine to form a hard-working, energetic midfield, complementing Can’s sheer power.

With Raheem Sterling’s contract situation only getting worse over the summer, the 20-year-old is offloaded to the highest bidder, Real Madrid, leaving the attacking midfield responsibilities down to Philippe Coutinho, whose unwavering loyalty endear him to Rodgers.

In his favoured No. 10 role, Coutinho will be tasked with supplying Liverpool’s strike partnership with consistent quality of service.

Another bosman signing for Rodgers, Ings is made Liverpool’s top priority in the summer market with his Burnley contract expiring—brought to a tribunal, the Reds agree to pay £7 million for Ings’ services, giving him the No. 9 shirt.

This establishes the England U21s man as a first-team regular in 2015/16, and his work rate and technical ability will suit him as the link between midfield and attack when required.

Over the worst of his injury troubles after a majorly disappointing 2014/15 campaign, Sturridge is rejuvenated after a summer of rehabilitation and rest, and ready to start the season as Liverpool’s chief goalscorer.

Sturridge, however, will be threatened by the presence of Theo Walcott on the Liverpool bench and Divock Origi also in the squad.

Mathew Ryan – Signed initially as second-choice goalkeeper in a £5 million deal from Club Brugge, Ryan will hope to displace Mignolet with some strong performances in the Europa League.

Jon Flanagan – Bolstering both left and right-back for Rodgers, Jon Flanagan’s new long-term deal secures his place as a fixture in the Liverpool squad.

Jordan Rossiter – Promoted to Rodgers first-team squad after recovering from injury over the summer, Jordan Rossiter provides a talented, committed reinforcement in midfield.

Joe Allen – Another Liverpool player to commit his future to the club with a new contract over the summer, Joe Allen’s role as useful squad player continues — he will rotate with Milner over the season.

Jordon Ibe – With Sterling leaving, Jordon Ibe will take up the mantle as Liverpool’s most talented young forward, and will be feature prominently throughout the campaign.

Who will line up in the new Liverpool home kit at the start of next season? Let us know in the comments below.