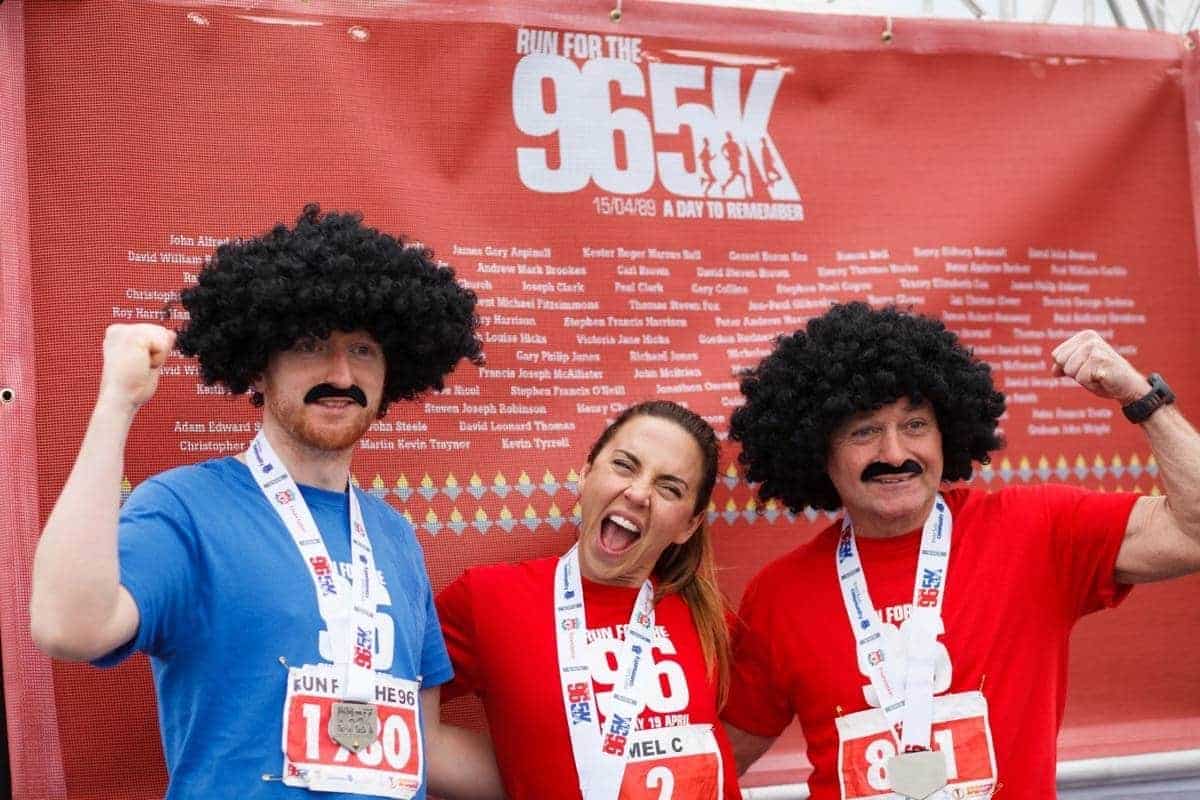 Almost 2,500 walkers, joggers and runners wearing red and blue stood side by side on Sunday (19 April) for the inaugural Run For The 96 5K in memory of the 96 Liverpool fans who lost their lives in the Hillsborough tragedy.

The aim was to celebrate the lives of The 96, and to remember their families and the survivors of Hillsborough, which happened 26 years ago last week.

Everyone taking part was encouraged to wear their specially designed red or blue event T-shirts, which created a special display of unity as runners made their way round the 5K route, which took them past Anfield, near Goodison and round the park’s Isla Gladstone Conservatory.

The Run For The 96 5K has the support of the Hillsborough Family Support Group, and a number of families and survivors attended and joined runners and celebrity guests to take part.

As a mark of respect, the crowd joined together for a minute’s applause to remember The 96 before Hillsborough Family Support Group Chairman Margaret Aspinall officially started the fun run.

Margaret later congratulated runners as they crossed the finish line by presenting them with their special commemorative medals.

“This new event to remember The 96 is a wonderful thing for the city. There are lots of Everton fans with Liverpool fans to run in their memory, and funds raised are going to two good causes so it’s brilliant. It’s also a great day to show the survivors that they’ve got our support and always will have. It’s great to see this unity.”

Run For The 96 5K is the brainchild of Liverpool fan Dom Williams, a dad of four originally from Liverpool who now lives in the South West of England.

Dom has organised the mammoth three-day Hillsborough-Anfield 96-mile team running challenge for the past three years. This year, Dom changed the format by also introducing the new 5K community legacy fun run as a way of engaging the wider community.

This year, the Hillsborough-Anfield running team took on a 79-mile challenge over two days on Friday and Saturday (17 and 18 April). The runners and support team lay a floral tribute at Sheffield Wednesday’s Hillsborough memorial before setting off. They arrived at Anfield on Saturday evening where they also lay flowers at Liverpool’s temporary memorial. However, just five miles before arriving in Liverpool, Dom fell damaging his ligaments, leaving him in pain and limping. The next day he completed Run For The 96 5K on crutches.

“The first Run For The 96 5K has been an outstanding success and it will definitely be bigger and better next year.

“When I first had the idea three years ago, I wanted to create something positive for The 96, a legacy to engage the wider community – and I feel that’s exactly what we have achieved. Everyone’s feedback has been fantastic and this is something we can definitely build on.

“To see almost 2,500 people taking part was breath-taking. It was very special to have some of the families and survivors join us on the day. It’s been a very humbling experience for everyone involved. Thank you to everyone who took part and for all the special guests who made time to be there to support the event.”

A whole host of familiar faces turned out to show their support. Spice Girl and Liverpool fan, Sporty Spice Melanie Chisholm, was the first to sign up when the plans were first announced 12 months ago. And true to her word, she took part.

“I’m very proud to be here – and I hope to take part on a yearly basis. We’re raising money for great causes in the local community, and all in memory of the people we lost that terrible day at Hillsborough.

“A 5K sounds a little bit daunting, but you can run, walk or take part with your kids, friends and family. It would be wonderful if this event could grow and in five years’ time who know where we could be.”

Alan had to be at Wembley in the afternoon for Liverpool’s FA Cup semi-final game so instead pulled on his running shoes at 7am so he could still take part.

“It’s such an exciting and memorable day to honour The 96. I’m so proud to be here and be part of it.”

“We want to keep bringing people together and for there to be a positive legacy. A positive is the solidarity that we’ve seen in the city. Finding ways we can continue to celebrate that is truly important so I’m pleased to show my support.”

And it wasn’t just families faces who supported the event – Voice of Anfield, stadium announcer George Sephton also turned out to cheer on the runners.

The event also attracted wheelchairs users, groups of families, fancy dress runners, and even some who ran with their dogs – making it a real inclusive event for all.

“Run For The 96 5K was a fitting end to Dom and his team’s fantastic achievement of running 79 miles over two days, what a phenomenal achievement. And Dom completing the 5K with ligament damage really is going the extra mile.

“I’m immensely proud of the overall event and the commitment of everyone taking part, especially those running in their first event purely in memory of The 96 is a fitting tribute. Run For The 96 5K really does have the potential to become a key date in the city calendar as people run to remember.”

The entry fee for Run For The 96 5K will pay to stage and deliver all aspects of the event.

The online giving page is still available, visit www.hillsborough-anfieldrun.com for more details or donate direct to the joint charity fund via Virgin Giving.