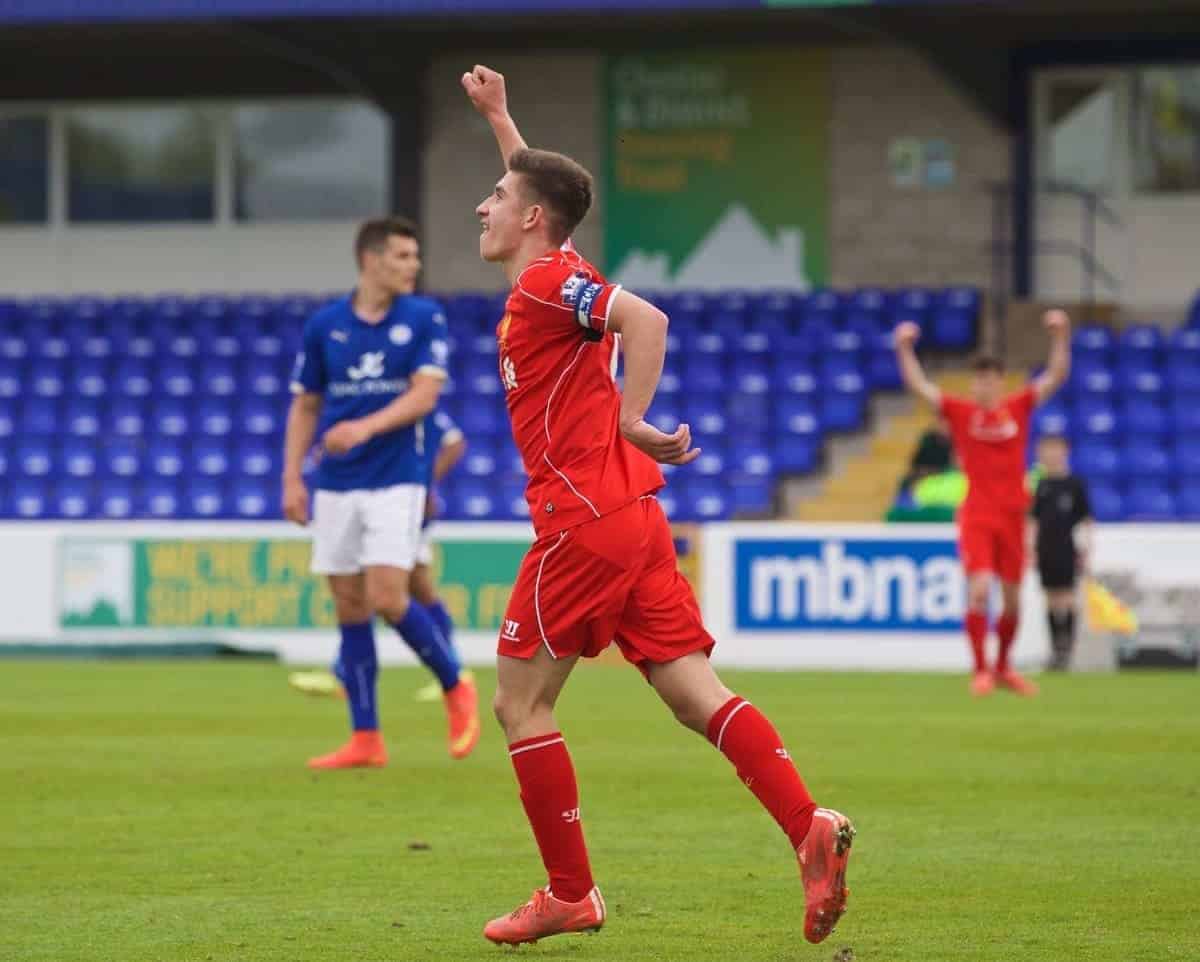 Michael Beale’s Liverpool U21s edged closer to the U21 Premier League title with an impressive 2-1 comeback victory over their Leicester City counterparts at Chester’s Swansway Stadium on Monday evening.

After the Foxes went 1-0 up through a Jamie Davis goal in the first half, a header from Daniel Cleary and a stunning, long-range strike from Cameron Brannagan gave the young Reds a priceless three points.

With first-team manager Brendan Rodgers outlining his vision of youth development by means of next season’s Europa League this week, which U21s stars could make the step up?

So how did the quintet get on against Leicester?

Deployed in his typical prowling position in midfield, Brannagan busied himself breaking up play and passing the ball on with simple touches—laying off to deep-lying playmaker O’Hanlan, there were shades of the Joe Allen-Jordan Henderson tandem from the first team.

With Leicester representing a particularly physical outfit Brannagan’s tenacity was vital in midfield, and the U21s captain’s influence in a box-to-box role grew as the game went on.

His pressing play was particularly useful, and this is perhaps why Rodgers has found a place for him on the first-team bench in recent games.

Brannagan sealed the victory with a sensational goal, launching a drive beyond Ben Hamer from outside the area.

After Kent’s two-goal heroics in the U21s’ last victory, a 3-1 win over Everton at Goodison Park, much was expected of the midfielder, who initially lined up in a right-wing role. Taking a knock early on, however, the 18-year-old struggled in the first half.

He should have won a penalty after being barged over on 37 minutes after a great, bursting run spanning from near the halfway line into the box, but did little else before the break.

Kent came into life in the second half after switching into a central role, utilising his pace and vision to carve open the Leicester defence.

After launching a long-range strike out of the stadium on 50 minutes, Kent became more selfless in possession, and was unlucky some of the chances he created didn’t end up in the back of the net.

Replaced by Sergi Canos on 84 minutes. A terrifying prospect when running at defences, Wilson nonetheless endured a tough time at the Swansway, with Foxes left-back Ben Chilwell shackling him impressively.

He had some fine chances when he cut inside onto his left, but the No. 7 struggled to truly impose himself on the game—his delivery from set-pieces was particularly weak. Wilson is a fine talent, but very raw, and has much to learn before Rodgers can trust him in the first team.

Subbed off on 73 minutes, with Corey Whelan replacing the midfielder.

Ojo stands out in encounters such as this due to his brutal, athletic physicality—he looks every bit first-team ready—and he continued his impressive season’s form with a composed display.

Starting off just behind Sinclair in the first half, Ojo came close with a long-range, low curler on 14 minutes, but initially struggled overall.

Switching to left wing in the second half however, with his pace and strength utilised more effectively, Ojo shone.

He continued to test Hamer with right-footed drives, showing his ability with both feet, dazzled the Foxes defence with great dribbling technique and carved out opportunity after opportunity for his teammates. Operating—as is often the case with the first team at present—as a lone striker, Sinclair was somewhat isolated up front throughout Monday’s clash, and struggled to truly threaten.

He combined well with some fine touches when he dropped deep in the first half, but couldn’t spearhead moves as a result.

Sinclair’s attacking movement and work rate improved in second half, and he came close with a far-post header on 70 minutes.

The 18-year-old, possessing great pace and movement as well as an intelligent use of strength and close ball-control, represents somewhat of a Daniel Sturridge-Raheem Sterling hybrid in attack, and if he develops his all-round game further he could make an impact next season.

Replaced by Samed Yesil on 88 minutes.

Which Liverpool U21s star has most impressed you this season? Let us know in the comments below.