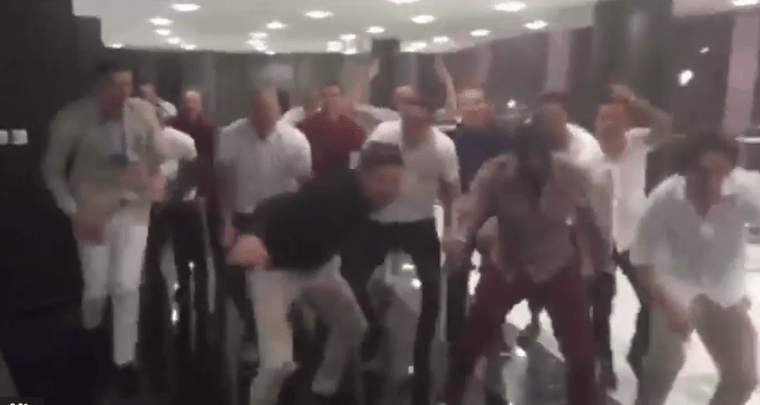 Liverpool players are enjoying themselves in Dubai this week…

After the Premier League season finished on Sunday, some Liverpool players are winding down in Dubai this week and this video has captured their jubilant reaction to Kolo Toure’s new deal at Anfield.

The likes of Steven Gerrard, Mamadou Sakho, Martin Skrtel and Joe Allen lead the celebrations, singing the infamous Kolo Toure/Yaya Toure song originally sung by Manchester City supporters when the Ivorian brothers were at the Etihad.

Upon signing his new one-year deal with the club, Toure said he wants to use his experience to help guide the likes of Philippe Coutinho and Jordan Henderson to become trophy-winning players.

“It’s fantastic news and I couldn’t ask for more,” he told the club’s official website. “For me, to be able to play for one of the best clubs in the world for longer means a lot to me, so I feel really happy to extend my career at this fantastic club.

“Everything is great for me with the other players, the manager, the club and the fans and I love it here.

“I am one of the most experienced players in the squad and I have to play that role because we have so many young players. For me, it’s important that I try to help those young players when they need it. I am happy to do that, I like to take on that responsibility, and I enjoy that role.

“The manager has known me for a long time and we’ve been speaking very well together. He knows what I can do on and off the pitch.

“I have won some things in my career, but now I want to help the likes of Philippe Coutinho, Jordan Henderson and the other young players win something because they are great, great players.

“If I can help them in any way with my experience to achieve things next season, that would be massive for me.”