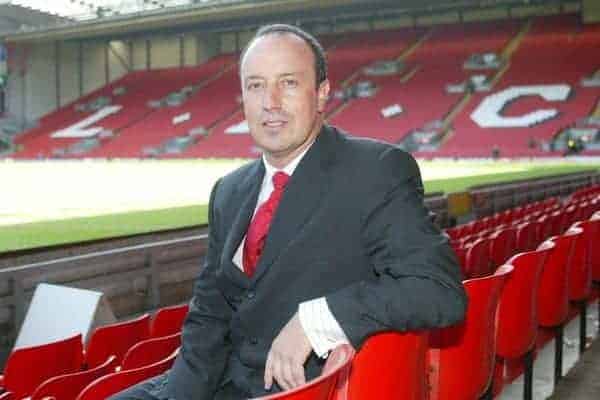 With Rafa Benitez being unveiled as the new Real Madrid boss this week, Simon Collings picks the Spaniard’s best XI as Liverpool manager. Focus and attention will now be on the former Liverpool boss and how he handles the pressures of managing the world’s biggest club.

Of course, Rafa’s had vast experience throughout the years managing the likes of Valencia, Inter Milan, Chelsea, and Napoli but despite success and trophies, it’s not been all plain sailing.

Managing Real Madrid is by far his biggest challenge. He started his coaching career in the Spanish capital, learning his trade on the coaching staff in the early 1990s and eventually taking charge of the reserve team from 1993 to 1995.

Hit and miss stints with Valladolid, Osasuna, and Tenerife saw him surprisingly land the hot seat at Valencia, where he broke the Barca-Real monopoly by winning two La Liga titles and a UEFA Cup.

This success brought him to the attention of Liverpool in 2004, were he became a instant fans favourite – guiding us to our fifth European triumph in his first season, followed by the FA Cup the year after.

He nearly won us the league in 2009 but the following year things went sour as his time on Merseyside was up.

He’ll still have his critics, yet most Reds fans with always have a soft spot for the man who guided us to Champions League glory.

Our best goalkeeper since Bruce Grobbelaar, Reina enjoyed eight exceptional years on Merseyside – hardly missing a game. He won the Premier League golden glove on three occasions, and provided a solid base to start attacks from. He’s still not been replaced to this day which says it all really.

A quiet, consistent performer, the Irish international racked up over 200 appearances under Benitez – providing balance down the right. Part of the team in Istanbul, he claims his injury at half time was the reason we won the trophy!

Carragher had his best years in a Reds shirt during Rafa’s time – becoming one of the world’s best defenders between 2005-09. The rock in which the manager built his side on, Carra added local grit to a highly technical, continental line-up. An LFC legend.

Signed by Gerard Houllier in 1999, Hyypia was already a colossus at the back by the time Rafa came in, yet he developed even more under the Spaniard’s guidance. He and Carra formed one of the best centre back pairings at the club since Hansen and Lawrenson.

Not the best tactically, but the rampaging Norwegian still had one hell of a left foot, and scored some vital cup goals for Benitez along the way. He added solid balance down the left, and was deadly from set-pieces.

Watching the Argentine flourish at Barca nowadays makes most Reds fans applaud, yet tear their hair out at the same time as to why we let him go so soon. It was a close run between him and Didi Hamann but what a player the little man was. Always on the move. Always gave 100%, and still a firm favourite amongst the fans.

The Spanish playmaker is not quite up there with the likes of Xavi and Iniesta, but he’s not far off. He was Rafa’s brain on the pitch and made the Reds tick. Exquisite on the ball, his range of passing had not been seen since the days of Jan Molby. Alonso was another one who left too soon.

Literally the man who dragged Benitez’s side over the line time and time again. Like Carra, Stevie’s best years were under Rafa – becoming one of world’s greatest midfielders. Without Gerrard, Benitez’s time in charge could have been a lot shorter. A real fan’s favourite. The Dutchman practically ran himself into the hearts and minds of Reds fans with his never say die attitude. One of the most underrated players ever to wear a Reds shirt, Kuyt scored some really important goals and was a man for the big occasions.

During his brief spell with the club El Nino was perhaps the best striker on the planet. His goal scoring record was up there with the likes of Fowler and Owen, and his partnership and understanding with Gerrard made the Reds unstoppable at times. May left under a cloud but his record still stands up.

A player who could smash one in from 25 yards, yet lose the ball with no one around – the little magician could delight as well as frustrate. Still a firm favourite on the Kop, Garcia added that little spark which all teams need. He was one of the main instigators in getting us to Istanbul.