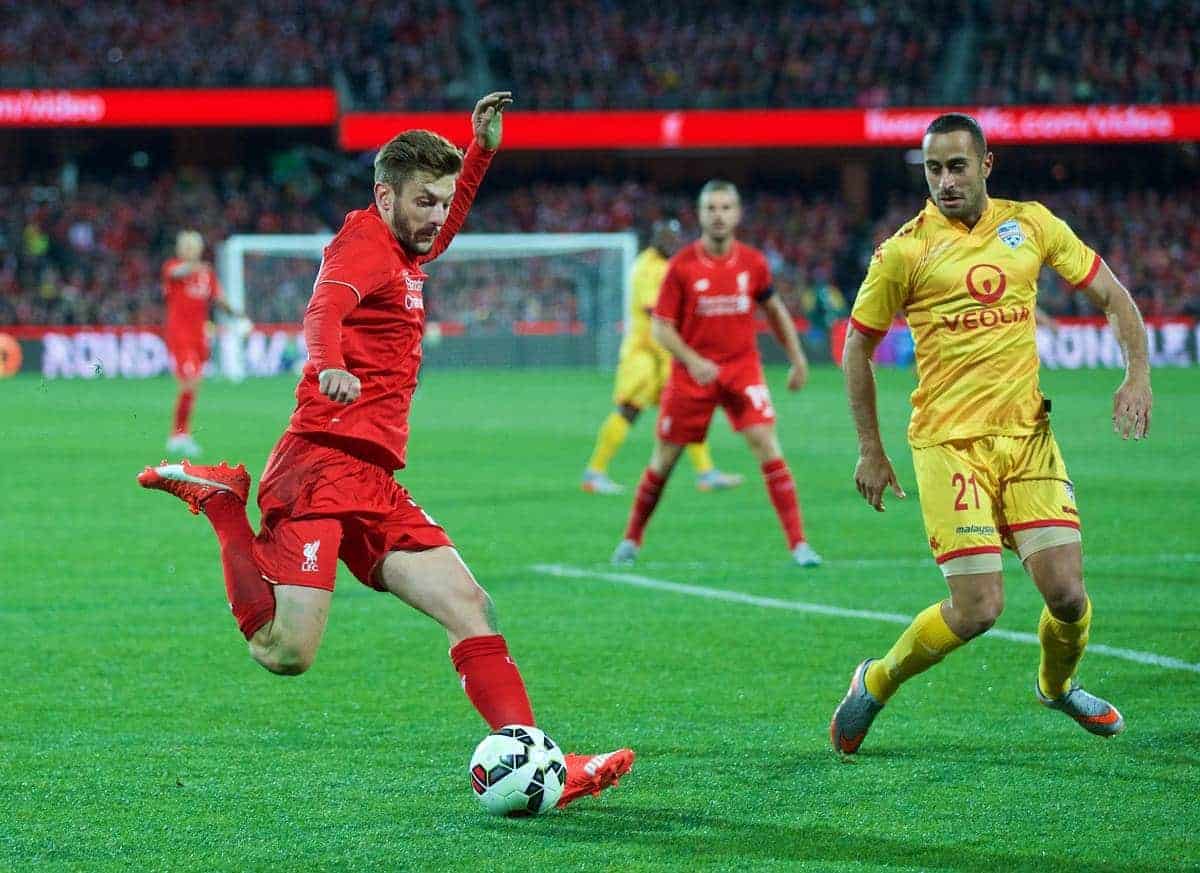 Liverpool recorded the third win of their pre-season schedule so far with a routine 2-0 victory over Adelaide United on Monday.

Second-half goals from James Milner – his second in as many games – and Danny Ings handed the Reds victory in their final game Down Under in front of a near-capacity crowd at the Adelaide Oval.

It was another productive workout which threw up a lot of positives as well as some things to work on for Brendan Rodgers’ side.

Here are five talking points from the game. Sat at the bottom of Liverpool’s midfield triangle, the Welshman caught the eye with an impressive display.

With Milner and Jordan Henderson in the engine room ahead, Allen marshalled in front of the back four superbly, with his play in and out of possession a timely reminder of what he can offer.

His use of the ball was decisive, sensible and controlling, and his tenacity in pressing and his reading of the game with positional awareness allowed for a fully functional Reds midfield.

This left Henderson and Milner able to carry out their good work impacting in more advanced areas.

For all the talk of sideways passes, Allen is very good at breaking lines with his passing. Thought he was good all round there. #LFC

Allen sprung attacks time and again, with his crisp passing breaking defensive lines, as well as making a number of gliding forward runs.

He knitted players together superbly throughout and carved out opportunities – one in particular for Divock Origi who should have done better with his effort.

It was a complete, controlling performance, and a much-needed one for the Wales international as the season approaches. The competition is on for Mamadou Sakho and Lovren to become the man to partner seemingly first choice Skrtel, and the Croatian put his case forward at the Oval.

Lovren enjoyed a decent 90 minutes as part of a Reds backline that was largely untroubled throughout, thanks to good organisation and the tireless work of the midfield unit ahead.

But defensively the 26-year-old was strong, with his aggression in tackling and duels impressive, and he imposed himself well on Adelaide’s attackers, thwarting attacks high-up.

He was reliable in possession, playing from the back, and should have scored just after half time with a free header from Henderson’s pinpoint corner.

Lovren defended well one-against-one on the front foot and bar some indecision positionally, looked settled alongside Skrtel at the heart of defence where he dealt well with most that came his way.

Tougher challenges are certainly to come and whether he should feature ahead of Sakho is up for debate, but Lovren showed improvement in the win.

Nathaniel Clyne Impresses as He Finds His Feet

The £12.5 million recruit has gone largely unnoticed in pre-season so far, but against Adelaide he showed why he was Rodgers’ first choice to fill the right-back void.

Like Milner, Clyne has settled in seamlessly already and he looked at home in the solid Reds back four next to Skrtel.

Defensively he was strong, allowing little to develop or cause danger down his side, with his awareness pleasing.

Offensively, he helped form a dominant right side with Jordon Ibe ahead.

The new arrival grabbed an assist for Ings’ match-sealing goal; driving forward, drawing defenders out of the back line and slotting a perfectly weighted pass for Ings to latch onto and slot home confidently.

It was another encouraging all-round display from the 24-year-old, helping the Reds to keep a welcome clean sheet.

The Reds dominated the midfield battle again in Adelaide, and it was in no small part down to the superb contribution of the energetic duo.

Working in tandem ahead of Allen, Henderson and Milner swarmed their opposite numbers and bossed the middle of the park from the first whistle, on and off the ball.

Their relentless chasing proved key to Liverpool’s pressing out of possession which helped ease defensive work, and was also fundamental for Rodgers’ men springing quick attacks with the front three ahead.

Milner grabbed the goal his play deserved for the second match running when he finished off Ibe’s dangerous ball across the face of goal, after a driving forward burst and pass from his midfield partner found the 19-year-old to begin with.

The pair have conjured up an effective partnership effortlessly, and should Liverpool enjoy a productive season this year it will be certainly be partly down to their brilliant work. It is by no means a real concern at this stage, with first-choice options not yet available, but there’s work to be done with the current attacking options at Rodgers’ disposal.

For all of Liverpool’s dominance first half, the Reds rarely threatened as they struggled to create goal-scoring opportunities in the final third.

When they did, it was often through the good work of the midfield trio rather than attacking players.

It was slow and rigid, with Ibe, Origi and Adam Lallana all sticking to position and operating on different wavelengths, which saw the breakdown of developing attacks too regularly.

The second half saw an improvement, with Ibe the man that caught the eye as he sparked into life by drifting into more central areas, where he could receive the ball and drive at the Adelaide back line.

Origi then enjoyed some service before he was replaced, and he would have netted had he been more alert to supply coming his way, but Milner provided the breakthrough after good work from the lively Ibe.

There was better intent to attacks after the interval – with Adelaide goalkeeper Eugene Galekovic forced into saves alongside the two goals.

But Rodgers has work to do to ensure these players are ready for when needed.

What did you take from Liverpool’s 2-0 victory over Adelaide United on Monday? Let us know in the comments below.