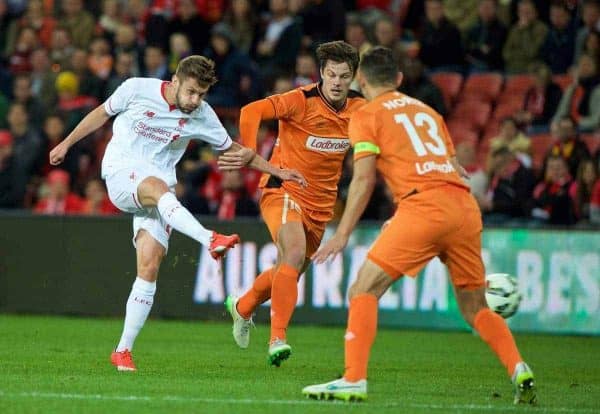 Liverpool continued their positive start to pre-season with a 2-1 win in Brisbane as Brendan Rodgers’ side stepped up their schedule.

The Reds fell behind after 17 minutes when Dimitri Petratos slotted the A-League side ahead, but Adam Lallana levelled proceedings with a well-taken, curling finish in a lively first half.

The impressive James Milner notched his first Liverpool goal and what proved to be the winner as the Reds made it two wins from two.

It was a much-needed step up in class for Liverpool and a productive, thorough workout for those that played.

Here are five discussion points from the clash.

It may only be two games into pre-season, but there’s no doubt that the fee paid to bring Gomez to Anfield will turn out to be a bargain.

The 18-year-old again oozed class – this time at left-back – in another eye-catching performance on his unnatural side.

Very little caused the teenager problems and he dealt with everything with minimum of fuss; his awareness to danger and composure in and out of possession made the game look easy.

Despite being on his unfavoured side, Gomez supported attacking play well too – not hesitating to burst forward with great pace and join developing play, his reliability in possession was impressive.

Rodgers says there's no chance Joe Gomez will go out on loan this season. 'He will stay here and compete for a place.' #LFC

He created a chance for Danny Ings with a perfectly weighted through pass after winning the ball back strongly with a well-read interception, and his all-round game is of someone way beyond his years.

It’s only the early stages of his Reds career, but Liverpool have a future star on their hands, and one who could be ready for first-team action this season.

The 27-year-old continued his positive start with a second goal in as many games in Brisbane.

Lallana looked confident, productive and like a man who was enjoying the opportunity of a so far uninterrupted pre-season campaign.

He notched a well-taken goal in Bangkok and did the same again here, curling home into the far corner after cutting inside his marker onto his favoured right foot.

Great goal. Going forward we look lively. Different options. Milner is a good footballer. Lallana looks like he has a point to prove

He was influential in a lot of attacking play and though not everything came off, there were signs that he is progressing well.

He looked fresh, revitalised and ready to play an important part after a lacklustre debut campaign.

Hopefully luck remains on his side for the rest of pre-season so he can hit the ground running, but so far it’s been a positive opening.

The new recruit has certainly taken little time to settle into life as a Liverpool player, as shown with a dominant performance at the Suncorp Stadium.

Milner worked superbly in central midfield alongside Jordan Henderson, with the 29-year-old impressing with his work rate off the ball, alongside his productivity on it.

The new boy brought energy and tempo to the Reds’ play throughout the 90 minutes, in which he scored and claimed an assist for Lallana’s opener, with a raking switched pass that found the goal-scorer perfectly.

Milner very impressive so far. Works so hard and his distribution is excellent. Relishing the central role Rodgers sold to him. #LFC

Alongside Henderson, Milner’s athleticism in midfield kept the Reds on the front foot – his driving runs proving too much to handle for Brisbane – and he got the goal his performance deserved in that exact fashion.

Bursting to arrive on the edge of the box, Milner nutmegged his marker before firing at goal, with his shot taking a slight deflection before finding the net.

Though too early to get carried away, Milner already looks an excellent piece of business from Rodgers.

It was another tidy display from Liverpool’s new striker but Ings showed why being deployed in a wide position shouldn’t become the norm.

The 22-year-old lined up right of Divock Origi in the Reds’ three-man attack where, though he was tidy, he proved fairly unproductive in front of Nathaniel Clyne, making for an inefficient right side.

Ings linked and interchanged with Origi well at times, but his best moments undoubtedly came when he drifted into a natural central role.

From the striking position, Ings was much more alive, inventive and a threat, and he was unlucky not to score with a shot on the half-turn that was kept out superbly by Roar stopper Jamie Young.

His intricacy in around the box is an underrated tool in his skill-set, alongside his ability to create an opportunity from nothing, but those moments came when Ings operated centrally rather than stuck wide.

If Rodgers has plans to play Ings from wide this season, the natural striker certainly has adapting to do.

But to get the best from him he must play down the middle.

Jordon Ibe impact a sign of things to come

The 19-year-old’s outstanding talent is no longer of any real surprise after his breakthrough last year, but the teenager showed he’s ready to progress further.

Entering on the hour mark – in place Lallana on the left of the Reds front line – Ibe’s impact was stunning, with Roar’s right side pinned on the back-foot as they were lost as to how to deal with his power, pace and trickery.

The youngster’s desire to attack the opposition saw him carve out a number of opportunities and he twice went close with two brilliant individual efforts.

He drew a superb flying save from Young, who prevented his rocket finding the top corner after he cut inside, and the wide man later ran from inside his own half, leaving Roar defenders for dead, before seeing his toe-poke well kept out again.

Rodgers has plenty attacking options at his disposal but few are exciting as Ibe, who looks ready to play a big role to play this season at Anfield.